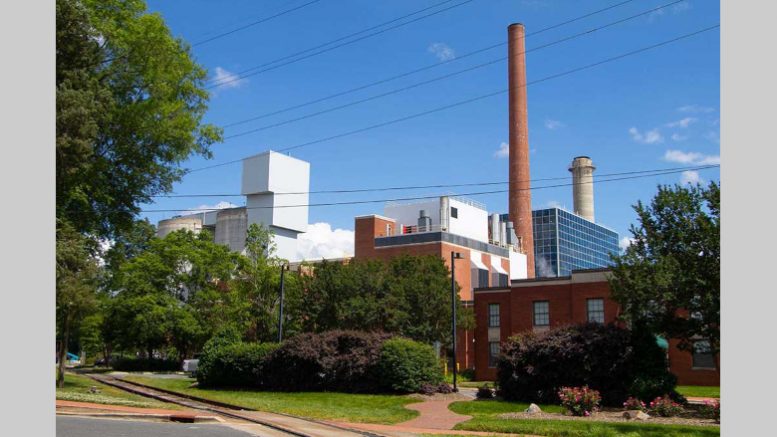 The Cogeneration Facility on Cameron Ave. Photo courtesy of University of North Carolina.

A draft of UNC-Chapel Hill’s air permit renewal was released last month, which will allow for the continued use of its coal plant without a heat input limit. Amidst a climate emergency declared by the Town of Chapel Hill, community members are concerned about what this new permit means for the area.

Cameron Avenue Cogeneration Facility currently provides electricity and steam for the campus and UNC Hospitals. Title V of the Clean Air Act requires air permits to be administered to each major polluting facility in the state by the N.C. Division of Air Quality. After the public comment period and a public hearing on May 4, the division will issue a final 5-year permit.

In 2019, Gov. Roy Cooper issued Executive Order 80, which aims to reduce statewide greenhouse gas emissions by 40 percent by 2025. Earlier this month, the Town of Chapel Hill approved a new Climate Action and Response Plan to work toward 80 percent clean, renewable energy by 2030.

UNC has also announced a new Climate Action Plan, which accelerates the 2009 plan’s target for net-zero greenhouse gas emissions by 10 years, now set for 2040. It also includes 25 strategies to reduce emissions by 79 percent compared to the 2007 baseline.

However, the plan does not address the future use of its coal plant. The new air permit draft removes the heat input limit, which will allow UNC to emit higher levels of nitrogen oxide and sulfur dioxide.

Claire Bradley is a UNC student and the co-hub coordinator for the Chapel Hill & Carrboro Sunrise Movement. Sunrise is a youth activism movement that has been heavily involved in pushing the town and university to improve its environmental efforts.

Coal contains toxins and pollutants that can create lung issues and other health complications for community members and students, Bradley said. These greenhouse gases are contributing to a larger universal issue.

“Climate crisis is wreaking havoc on frontline communities through increased flooding, more intense storms, wildfires and more,” she said. “This will only get worse, and the fact that UNC is contributing to it means they are actively putting the community and campus at risk.”

Last year, a federal District Court judge denied a motion by UNC to dismiss claims that the plant violated the emission levels set by the Clean Air Act. This lawsuit was filed by the Center for Biological Diversity and the Sierra Club in 2019. No update on this lawsuit has been issued.

Piehler said that since the air permit renewal is subject to a lawsuit, he could not comment on the specifics. However, he said this permit is necessary for the university to continue operating.

In 2010, former UNC Chancellor Holden Thorp promised the community that the campus would be completely coal-free by 2020. He resigned shortly after this — and before reaching this goal. Piehler said that given the timeline, this plan was not realistic.

“It was based on some assumptions about being able to shift fuel sources, and the technical side of that didn’t work out as people hoped, and there were logistical challenges, which led to financial challenges,” he said.

The university wants to be transparent with the success and failures as the plan moves forward, Piehler said. It plans to publish a live document online that will update the community on the progress.

A public comment period is currently open on the university’s Climate Action Plan. Piehler said he hopes the diversity of perspectives will provide focused feedback that will help to progress the plan.

“As we become more knowledgeable about our sources and more experienced with our interventions, we have a better sense of how quickly we can move, and we’re confident, though we recognize that it is an aspirational goal,” he said. “We’re going to work very hard to get there.”