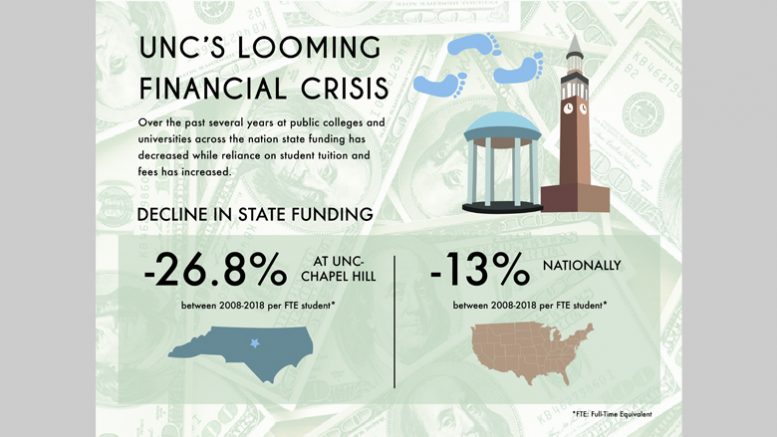 UNC-Chapel Hill is facing significant financial losses amid the coronavirus pandemic — losses that could lead to potential furloughs and departmental budget cuts — but data show the school’s financial problems were present long before that.

Between 2008 and 2018, state appropriations per full-time equivalent student decreased by 27 percent at UNC, when adjusted for inflation.

Consequently, the university has become increasingly reliant on enrollment increases and tuition revenue to keep its doors open, meaning students and their families now shoulder more of the burden of paying for higher education.

This is not an isolated trend. According to a 2019 report from the Center on Budget and Policy Priorities, states are still funding higher education at pre-recession levels, even as state revenues have increased.

On average, the report says, states spent 13 percent less per student between 2008 and 2018, after adjusting for inflation, leaving most public universities struggling to recoup the lost revenue.

“We have effectively defunded higher education at a time when we need it most,” said Deb Aikat, a member of the Faculty Executive Committee and associate professor of journalism.

An analysis from the Hechinger Report, a nonprofit news organization that specializes in in-depth education reporting, found that UNC was one of only three of North Carolina’s public four-year institutions that showed any warning signs of financial stress. In North Carolina, the state’s fiscal policy is largely to blame.

“The state legislature and the Board of Governors’ insistence that we operate the university on the model of a business instead of a public good that requires public support has led us to the precipice of this, even before COVID hit,” said Jay Smith, a professor of history.

How did we get here?

In 2013, when Republicans obtained a supermajority in the General Assembly, they began phasing in aggressive personal and corporate income tax cuts, which cost the state about $3 billion a year in lost revenue.

Rep. Graig Meyer (D-Caswell, Orange), who took office in 2013, said higher education is a topic that has been debated in the state budget every year. When you cut taxes that much, Meyer said, it’s impossible for that not to have an impact somewhere.

“I think the Republicans had a belief when they took charge that the university system was overfunded, and they wanted to pare it down like they wanted to pare down the size of the rest of government,” Meyer said. “It’s ideological for them, to some extent.”

As a result, institutions that took a hit during the recession, such as the UNC system, still are not fully funded at the level they were previously.

James Moeser, who served as UNC’s chancellor between 2000 and 2008, described UNC’s current financial situation as a “perfect storm of negatives and red ink.”

In the past decade, North Carolina has seen a steady decline in public support for higher education and increased reliance on tuition as a source to replace that lost revenue, Moeser said. Tuition at UNC increased by 11 percent between 2010 and 2014. However, tuition at UNC system schools has remained frozen for several years now. While the freezes make UNC an attractive and affordable option for in-state students, some question whether it’s really sustainable as state appropriations trend downward.

“What has happened is we don’t have wiggle room in the budget,” Aikat said. “We have to look every year to the state legislature and our research dollars to see how we can fund education.”

Before the pandemic, the UNC Board of Governors planned to approve modest increases to in-state tuition for the 2020-21 academic year. Ultimately, however, the BOG voted to keep tuition and fees frozen due to the financial burden placed on families as a result of the pandemic.

“As directed by the Board of Governors, tuition at UNC system schools must remain in the bottom quartile of their peer group for in-state tuition,” UNC Media Relations said in an email. “Carolina’s in-state tuition continues to be the lowest in its BOG-approved peer group.”

Tuition freezes, as well a cap on out-of-state enrollment, have placed UNC in a “financial stranglehold,” Smith said.

Smith believes that any budget cuts should begin, and perhaps end, with administrator salaries. Increasing administrative bloat, he said, is partly to blame for budget shortfalls.

What does this mean for the future?

At a Sep. 11 meeting of the Faculty Council, Interim Vice Chancellor for Finance Nate Knuffman said UNC could see a financial loss of $300 million this fiscal year — about 8 percent of current revenues. This follows a $100 million loss in revenue between March and the end of the 2020 fiscal year in June.

The brunt of the losses come from auxiliary revenues such as housing and dining, officials say. But with the future of COVID-19 still unclear, students, faculty and staff are questioning how the university will address the deficit — and who will bear the cost.

Several short-term tools are available to address the deficit, including furloughs and temporary reductions in base salary for faculty and staff, Becci Menghini, vice chancellor for human resources and equal opportunity and compliance toldfaculty at the meeting.

The administration has told faculty to prepare for potential furloughs and departmental budget cuts, leaving many wondering how much further they can stretch their dollars.

“It’s difficult to see how they’re going to make it through without having to make some significant cuts to staff,” Meyer said. “And really, it’s going to come out of people’s jobs.”

According to an email from UNC Media Relations, there are steps the university must take before “resorting to personnel action to address budgetary issues.” Such steps include determining how large the deficit is, what type of money is impacted and what tools are available to address the deficit, the email said.

Moeser said it could take the university three to five years to recover from its current financial situation.

“We cannot expect to dig ourselves out of this hole in one fiscal year,” he said. “It’s going to take very careful fiscal planning, and strong support from the state and federal governments.”

Emily to the Rescue