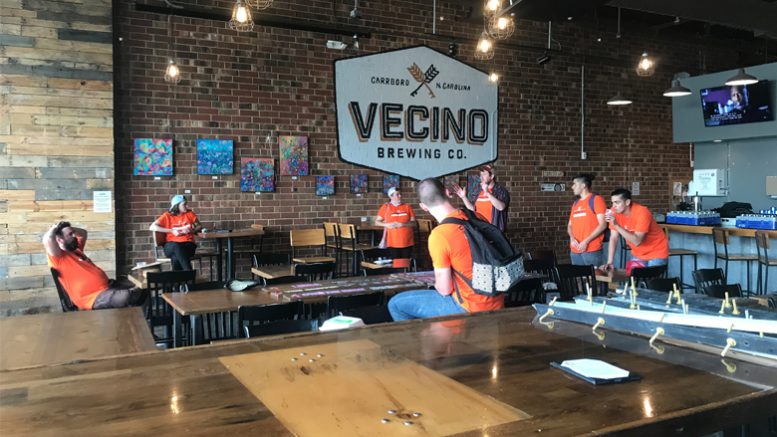 Carrboro United having a debriefing meeting after a hub day.

Carrboro’s restaurants have been closed and the town’s food service economy has been on the verge of collapse because of COVID-19. But instead of fighting to survive on their own, a number of Carrboro businesses have banded together to serve the public and help themselves.

Carrboro United, launched by a group of local restaurants, town leaders, farmers and food purveyors, is operating a central food hub during the coronavirus outbreak, helping feed the public and putting some money directly back into the local food service economy. The organization buys food from local farmers and restaurants who would otherwise have few outlets for their food, and sells it to customers three days per week from the hub.

“I can’t let my friends go out of business,” Raynor said. “These guys are a family.” Tom Raynor putting on his motorcycle jacket before leaving the food hub.

Customers must order online at least one day in advance of pick-up, and can pick up their orders in the parking lot in front of Cat’s Cradle and Vecino Brewing on East Main Street. Raynor said the food hub follows rigorous sanitation practices and has complete control of the food from farm to table. He said the hub has served more than 10,000 meals since opening about two weeks ago.

Lydia Lavelle, Carrboro’s mayor, said she has been impressed with the food hub.

“The rotation of vendors who are a part of it, the variety of meals that they offer… It’s frankly phenomenal,” Lavelle said.

The mayor issued a town proclamation on March 20 encouraging Carrboro residents to stay home, practice social distancing and consider ordering food from the Carrboro United food hub. Her own message may have worked against her; Lavelle said she has tried and failed several times to order meals from Carrboro United because they have been sold out each time.

“They took this opportunity and ran with it in typical Carrboro spirit,” Lavelle said.

Raynor came up with the idea for the food hub roughly three weeks ago, and had it up and running within a week. Zoe Dehmer, Carrboro United’s operations manager, said she’s happy to work with Raynor despite the challenges of starting a business so quickly. Carrboro United employees cleaning up after a hub day.

“We’re all working 18, 20 hours a day, seven days a week,” Dehmer said. “But every day when I begin to feel sorry for myself for working so much, I think, ‘Well, I just had to lay off over 40 people and none of them have jobs, so I’m lucky to have a job.’”

Dehmer said their business has already made a difference for Haw River Mushrooms, a farm based in Saxapahaw that sells its produce in the Carrboro Farmers Market.

“They’ve said that due to Carrboro United orders they’ve not had to fire their staff yet,” Dehmer said.

Though they primarily function as a food pick-up service, Raynor said Carrboro United strives to help any and all Carrboro businesses, not just local restaurants and farmers. The group bought orange Carrboro United logo t-shirts for all their employees from the Merch, a local T-shirt printing shop, and used the Splinter group, a local branding agency, for their website and logo. They also hired a local musician to perform at their hub day on March 28.

Raynor said he’s been contacted by numerous towns and cities who want to know how he and Dehmer started Carrboro United so quickly. “It’s like running a presidential campaign,” Raynor said.

Raynor said he has allocated $500,000 of his personal retirement fund towards emergency loans for local businesses. Talkative and ambitious, the two-time cancer survivor is not one to back down from a challenge.

The hub site for ordering is at https://carrborounited.com.

Be the first to comment on "United, Carrboro Restaurants Fight Back"