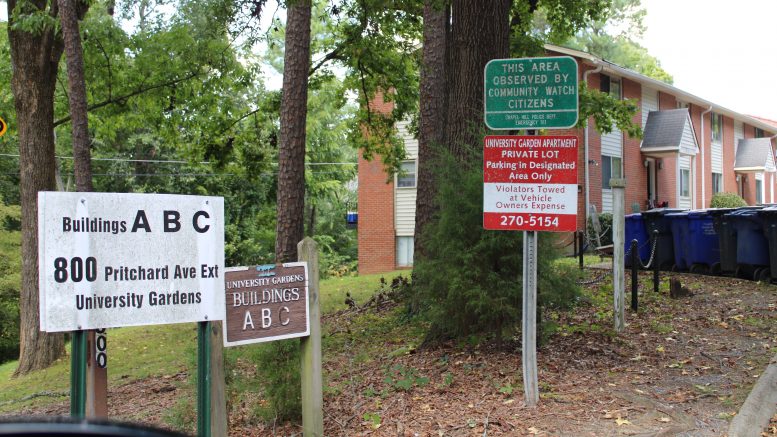 University Gardens, a residential complex near the UNC-Chapel Hill campus, is the site of a second gunshot homicide in 2022, the fifth murder of the year. Photo by Michelle Cassell.

CHAPEL HILL—At 7:10 p.m., October 4, 2022, the Chapel Hill Police Department announced the arrest of Michael Jerome Henry, 29, of Durham, by U.S. Marshals with the Carolina Regional Task Force for the murder of Michael Deshai Lee, 51, of Chapel Hill, at the University Gardens complex on September 27, 2022. Lee died of gunshot wounds at the scene.

Arrested in Durham, Henry is being held at the Orange County Detention Center without bond and faces five charges, including murder, two counts of attempted murder of two other gunshot victims who sustained non-life threatening injuries, and assault with a deadly weapon with the intent to kill. The other charges are assault with a deadly weapon and shooting into an occupied vehicle.

“Our officers and investigators have worked around the clock since this shooting occurred last week to bring some closure to Mr. Lee’s family and to reassure our concerned community.  We are so appreciative for the many community members who have shared information about this case and to our partners with the U.S. Marshals Fugitive Task Force for their efforts to bring Mr. Henry to justice without delay or incident,” Blue said.

The investigation is ongoing, with no further information available at this time, including motive.