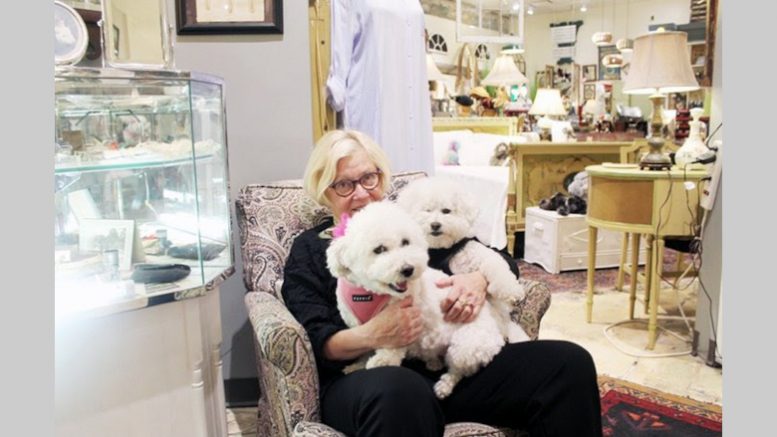 There’s a shopping center in Chapel Hill that’s fun to visit because many longtime Chapel Hill retailers are at the helm and their experience adds to the feeling of community. University Place (formerly known as University Mall) is anchored by SilverSpot Cinema. The mall originally opened with Ivey’s and Belk (Belk-Leggett Horton) in 1973, and Roses Stores as a junior anchor. It was developed by E. N. Richards and originally featured 78 stores.

The mall was purchased in 2018 and its current owner (Ram Realty) has a far-reaching vision on the negotiation table with the Town of Chapel Hill that includes turning all of the storefronts to face the mall’s exterior and later demolishing part of the former Southern Season store anchoring the east wing.

Today, University Place is still rich with seasoned retailers, committed to their shops and devoted to their customers. Pam Williams has owned and operated Night Gallery-Branching Out since 1970 – 51 years! She is the last of the original tenants of University Mall (now University Place). Her store is an eclectic mix of women’s clothing, unique cards, exotic soaps and home decor. She still regularly works the Monday through Saturday schedule. Like Pam Williams, many of these University Place businesses are defined by their spirit—which is community-focused – and resilient. They open their doors each day and welcome guests with a smile, despite the uncertainty ahead, because it’s what drives them.

Night Gallery-Branching Out, Since 1969. Some Father’s Day ideas include a grilling apron, unique socks, custom soap, paint by number sets.

William Travis Jewelry is a custom design jewelry store with a collection of pieces made in house. A custom men’s wedding band is shown here. Ken Jackson with Wentworth and Sloan Jewelers (Middle) still commands a loyal following to his store in University Place.

Local radio host Ron Stutts retired last year from WCHL. Their studios are in University Place, right next to the iconic jewelers, Wentworth and Sloan. Opened in 1945, Wentworth & Sloan is Chapel Hill’s Oldest & Finest Jeweler. “Working at University Place I was always happy to see the loyal customers who shopped at Wentworth and Sloan, largely because of their reputation for supporting community and their commitment to excellence. I have known Ken Jackson (the owner) for 40 years and he is one of the nicest people I know.”

University Place is bustling with these sorts of retailers, tried and true, worthy of our support now and into the future. The Frame & Print Shop has been a mainstay at University Place since its initial opening in 1973. Gerrie & Company has a wide range of pocket knives, jewelry and gifts.