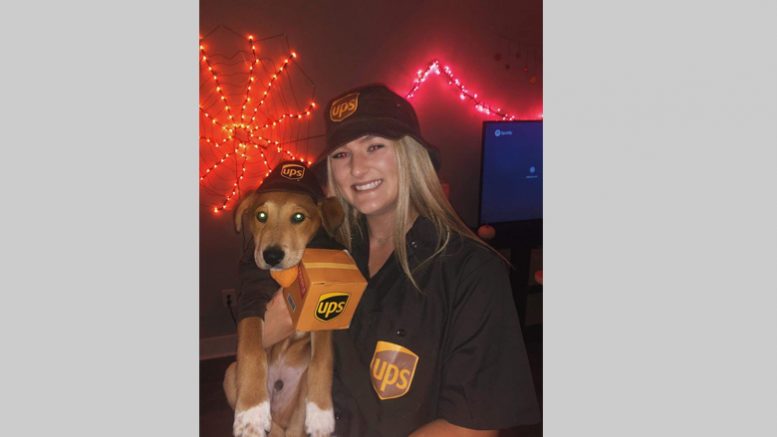 Olivia Rupkalvis always had dogs growing up. She describes herself as a “huge animal person” who volunteered frequently with animal shelters during high school. Although she wanted a dog while attending UNC, as a college student she did not have enough money.

Instead, she decided to get involved with Eyes Ears Nose and Paws, a Chapel Hill nonprofit that trains and places service dogs. By the time Rupkalvis graduated last May, she had trained three puppies.

“I had two foster cats after that. I’ve been around the map with foster animals,” Rupkalvis said. “But I got really attached to my last foster and kind of decided that I would take a break. I wasn’t planning on getting a dog this soon, but it just kind of happened.”

It happened, she explained, because of the COVID-19 pandemic.

“I work remotely for a company up in New Jersey, so I work at home all day by myself. Basically, I was just kind of bored at home and lonely for the most part. My roommate’s an EMT, so she’s always gone,” Rupkalvis said. “In my spare time I would be looking on adoption sites. Definitely, the pandemic contributed to it a lot. If I was in an office, I wouldn’t have made the decision so soon.”

Rupkalvis is one of many local residents who have adopted a new pet to help cope with quarantine fatigue. It’s a national trend.

At Petfinder.com, traffic increased 43 percent and adoption inquiries jumped 116 percent in the second half of March — right at the beginning of the pandemic and the subsequent lockdowns. Shelters nationwide began reporting they were either all or almost all out of cats and dogs after a surge in applications. The American Society for the Prevention of Cruelty to Animals said many of its offices saw a 70-percent increase in animals going into foster care. Many shelters reported the same phenomenon.

Orange County Animal Services says adoption rates at its shelter have remained at their usual rate of about 90 percent. While Animal Services has not actually seen increases, there is anecdotal evidence locally of people getting new pets, said OCAS Communications Specialist Tenille Fox. It’s possible, she said, that county residents have been adopting through independent shelters and unique platforms, like Rupkalvis.

Fox said she has heard of people using pets to cope with the pandemic.

“I’ve heard a lot of people talk about how they want companions during this time, so I think it is okay to say that’s probably why we’re still seeing a lot of adoptions. I mean they’re home more,” Fox said.

She submitted an application through the shelter, not thinking anything would come of it. They emailed her that same night asking if she wanted to meet Paxton’s litter of six.

“They said they had over 80 applicants for the whole litter, so I kind of feel like it was fate that I got selected for him,” Rupkalvis said. “I drove to Charlotte and met him, and they were like so, ‘What do you think?’ And I was like, ‘You just gave me this four-pound puppy — I’m obviously going to take him.”

Rupkalvis said dogs have always made her happier in general, and Paxton has improved her mood greatly during this difficult time.

Aysha Diallo, a UNC senior living in Chapel Hill, also did not adopt her pet from a traditional shelter. She found her cat on social media.

“I’ve always been a cat person. I think cats are very cute, and I was just on a Facebook page for rehoming cats, and I stumbled across Oscar,” Diallo said. “And I figured that since I was going to be home all the time now that getting a cat, I could do it and manage.”

Oscar, a four-year-old orange and white cat was being re-homed by someone in Durham. Diallo said the Facebook page, which is mainly used by people living in the Carolinas, has thousands of followers looking for cat advice, trying to re-home cats or hoping to adopt them.

She describes getting a cat as the best thing she has done in 2020 because of the emotional benefits. Aysha Diallo stumbled upon Oscar on a Facebook page for re-homing cats. He’s the first pet she has ever had, and she says adopting him was the best thing she’s done all year.

“Oscar’s the first pet I’ve ever had, like in my entire life, which is different,” Diallo said. “My parents were really mad at first, but now they call Oscar their grandchild.”

When the pandemic finally eases and quarantine restrictions are gone, residents can go back to offices and otherwise get out of their houses. Fox said Animal Services wants to help people — and their new pets — get ready for that time.

“We have been trying to let people know to prepare for the possibility of going back to a regular schedule at some point, especially with training little puppies and things like that,” she said. “You want to be sure that you get some crate training in or something that helps them be at home without you.”

Be the first to comment on "Want to cope with quarantine? Get a pet."