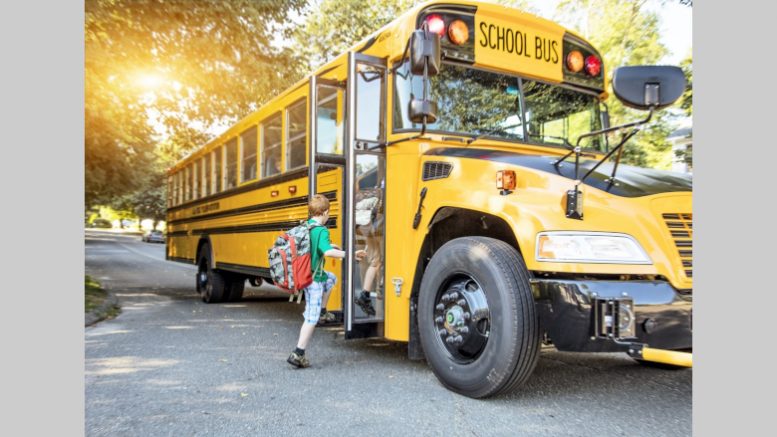 Bus drivers are in short supply in the Chapel Hill-Carrboro City School district.

An issue that’s been brewing under the surface for years has reached a fever pitch during the past few months, likely due to a combination of health concerns, split shift hours, pay, training time and competition.

The ramifications from this shortage are affecting families across Chapel Hill and Carrboro with some students beginning the year without being assigned a bus, and others facing extended ride times up to an hour and 15 minutes each way.

“Student ride times have been extended beyond what would be considered reasonable amounts of time on a bus, leading to late arrivals in the morning, as well as late departures in the afternoon,” CHCCS Superintendent Nyah Hamlett said of the issue during the Sept. 2 CHCCS Board of Education meeting. “This has also led to existing bus drivers being overextended and left to cover the decreased capacity of the transportation department.”

The problem is not unique to this area, and is something districts and municipalities have been dealing with across the country.

CHCCS Transportation Director Brad Johnson said the bussing process can be chaotic during the first few weeks of school, but that it eventually settles down. This year is different.

While Johnson said earlier this week that he is confident the routes will get smoother in the coming days, “the lack of drivers will not get better unless we make significant changes to our recruitment and retention efforts.”

“Under normal circumstances we operate 74 school buses. This year, we are operating 57 school buses in the morning and 50 in the afternoon. We are approximately 30 drivers short,” Johnson said. “In a normal year typically 45 to 49% of our students actually ride a school bus. I cannot tell you what that looks like this year. I’ve been here five and a half years, and I have not experienced anything remotely close to what we’re experiencing this year.”

“This is a long-term issue that was wholly exacerbated by the pandemic,” Johnson explained.

The number of drivers has been declining over the past few years, but never by this much, he said.

“With the COVID pandemic it has now become severe, [reaching] critical crisis levels,” he said. Drivers are leaving in droves. Why? Johnson said it isn’t due to any one issue.

“There are several factors that contribute to this. I think originally it started with pay – lower starting wages — and limited hours. I think now it’s even more of an issue because you’ve got other industries that are seeking CDL [i.e., commercially-licensed] drivers that can pay a higher competitive salary than we can and even offer more hours than we can.”

Health concerns have also been an issue for some drivers.

Though the district is strategizing ways to solve the long-term problem, in the short-term, it has relied on extending bus routes as band-aids to cope with the shortage.

“Our main strategy has been extending bus ride times or student ride times to increase school bus efficiency by utilizing more capacity on the bus. We’ve extended our bus rides so that we can maximize the number of seats available,” Johnson said. “Our bus routes have now been extended up to an hour and 15 minutes for some students.”

Parents and students have experienced some challenges because of the district’s short-term strategies.

“The families have expressed their frustration. In the same vein, they’ve been very supportive. They understand that this is a nationwide shortage that is going to take us some time to dig ourselves out of. Up to this point, the majority of the families have been understanding and have been very willing to accept the situation that we’re in, and accept that their students may end up being on a bus for a little longer,” Johnson said.

Craig said that her middle schooler had the most problems with transportation this year.

The parents of affected students in the neighborhood worked together to drive them.

“We decided that we all have to drive them, clearly,” Craig said. “One family drove there in the morning, and then I’ve picked up most afternoons except for the afternoons I have to pick up my high schooler, because her bus has so far has come so late that it’s like 4:45 p.m. before they’ve been getting picked up and she has activities and so now I’m picking up all the high schoolers to try to get them home before 5:30 p.m.”

Craig said that while the situation isn’t ideal, she has appreciated the district’s efforts to remedy it, and said she feels sympathetic toward the bus drivers.

“It’s been an ongoing problem. It’s not unique to this year, it’s just much worse this year,” she said. “I know that they are trying to increase their hourly wage and attract other people. The transportation people have done the best that they can possibly do, I’m not at all being critical of them. I feel like we just might need to adopt some extraordinary measures to hire people and keep them long term.”

“(The drivers) always do a good job. And it’s a really hard job. These are good people doing a hard thing, but we just don’t have enough of them,” she added.

Not just the district

This issue isn’t one faced only by school districts. According to Chapel Hill Transit Director Brian Litchfield, CHT is in the same boat. CHT currently has 36 full-time driver positions vacant.

“It’s been an issue this year and actually before COVID it was a challenge for us, but the last 18 months has certainly exacerbated that challenge,” Litchfield said.

“(We’re seeing) a significant number of shortages, to the point where we’ve had challenges meeting our service expectations and are going to be announcing some service adjustments that we’re going to have to make in the next week to help improve reliability,” he said. “We’re making those adjustments, not because of low demand or budget savings or anything like that, it’s simply we don’t have enough operators to provide the service.”

Some have retired, others cited health concerns as reason for leaving. According to Litchfield, some drivers are leaving the industry in order to drive products and deliveries rather than passengers, because there are fewer health concerns associated with the former.

“We’ve had folks that have left to go to private companies, between Amazon and similar sort of companies that are hiring a lot of drivers. Some folks have been attracted to that type of work. Perhaps safety may be part of it, maybe they drive around products or things like that versus driving around people and the challenges that come with that.”

Litchfield said the training and onboarding process can be a deterrent to applicants, as the training can take up to 16 weeks.

The temporary solutions explored by CHCCS and CHT do not address the long-term issue.

Pay increases have been proposed as a possible solution, though the Board of Education raised school bus drivers’ pay from $14.95/hour to $16.50/hour in June, which matches the starting salary for drivers at Chapel Hill Transit and is the second-highest rate in the state.

This measure hasn’t yet proved fruitful.

“We have not seen an increase in applicants due to the increased salary,” Johnson said.

“It’s been tough, it’s been difficult,” Johnson said of driver recruitment. “We’ve got competing school districts surrounding us. We’ve got Orange County, we’ve got Alamance, we’ve got Durham, we’ve got Chatham, we’re all competing for the same pool or within the same talent pool of employees. We’re also competing with Amazon, FedEx, and other companies that hire CDL drivers. It’s been very competitive and it’s been very hard for us to attract new applicants during this time.”

One long-term solution for the schools suggested by Superintendent Hamlett would be to stagger elementary school start times. This would kill a few birds with one stone, as drivers currently work split shifts, from 6 -9 a.m. and then again in the afternoon from 2 p.m. until 5 p.m.

“That could reduce our overall bus driver FTE requirements, while simultaneously increasing driver positions to the full eight hours a day. This would also increase our driver experience through higher gross pay, and it would also lead to increased efficiency ratios which ultimately determines our level of state transportation funding.”

At the CHCCS Board of Education meeting held Thursday night, the board voted to allocate more funding to help solve the problem.

“It will be the largest investment our school district has ever made in bus driver recruitment,” Johnson said of the measure.

The board approved the measure, allotting money to increase signing bonuses to $4,000, increase referral bonuses to $2,000, increasing attendance bonuses to $1,000 per semester, and paying trainees while they earn a commercial driver’s license, a process that takes approximately six weeks.

$25,000 was also set aside for marketing to recruit more drivers.

Hamlett said these retention and recruitment measures will be paid for via Elementary and Secondary School Emergency Relief (ESSER) II funding, which came from the federal CARES Act.

Drivers interested in working for either CHCCS or CHT can find more information about applying on their websites.

Be the first to comment on "WANTED: School Bus Drivers"

What Should You Eat?