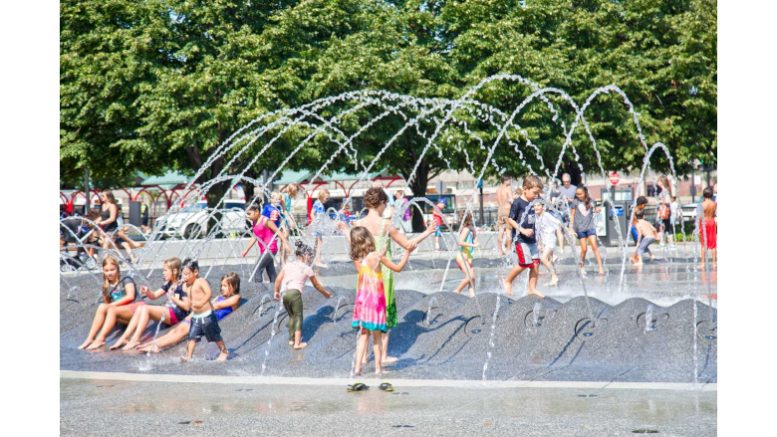 While there were officially three items of discussion on the docket for Wednesday’s Town Council meeting, the only real issue at hand was water. Namely, how to get more of it in some places and less of it in others.

Aquatic attractions a big splash with the council, but questions about scope and location loom large

The first official item on the agenda was a presentation from a working group formed to bring a public splash pad to Chapel Hill following a unanimous vote Sept. 21 to move forward with the project. Parks and Recreation Director Phil Fleischmann and Park Maintenance Superintendent Kevin Robinson gave a presentation about splash pads — the brightly-colored water fountain playgrounds popping up around the country — along with potential features, costs and operational models. The pair presented their findings from visits to splash pads in Mebane and Burlington as examples.

Kate Sayre, who initiated the petition on Change.org, spoke during the presentation about conversations she had with community members. She stressed that splash pads provide an accessible and inexpensive alternative to swimming pools and can provide a place for children of different ages, backgrounds and abilities to come together.

Several council members echoed Sayre’s sentiments about accessibility and inclusivity needing to be at the forefront of the discussion about the location of the splash pad. Among the locations mentioned during the session were Umstead Park, the Rogers-Eubanks Neighborhood Association Community Center at Rogers Road, and Hargraves Community Center. The idea for perhaps creating two splash pads instead of one was also discussed. However, Fleischmann stressed that any location mentioned at this time is simply a “jumping-off point.”

The size and scope of the project also came into question during the meeting, as Councilmember Hongbin Gu pointed to the wide range of costs in the presentation, from $300,000 to $1,000,000.

“I know that the budget you presented at the beginning has a pretty wide range,” she said. “I think it really depends on what kind of vision we have for this splash pad. Do we think it’s just going to be a neighborhood playground [amenity], or are we thinking it’s something like a destination?”

While the council voted in unison to approve the project a month ago, it’s not hard to see that both the location and the scope of the project could become points of contention and perhaps even political battlegrounds as it develops.

The second agenda item took a noticeably different tone from the first as Councilmember Michael Parker expressed frustration with several aspects of the Booker Creek Working Group’s report, presented by Co-Chairs Pamela Schultz and John Morris. During the council’s discussion, Parker called the organization and structure of the group into question.

“It seems to me that this shouldn’t be looking for a link to our town staff,” said Parker. “But this should be an effort that’s fully integrated with our town staff and at all points they’re working with you so that this isn’t an outside working group telling staff what to do or not to do. This is something the staff and the working group jointly developed together. So am I missing something here?”

Both Schultz and Deputy Town Manager Loyrn Clark emphasized that town staff members are closely involved with the project, but that only citizens are voting members of the group — another point with which Councilman Parker took issue.

“The staff are the ones who really know where all the flooding problems are, what we’ve done in the past, what solutions we’ve used in the past,” he said. “[The staff] have to be rolling up their sleeves with the working group and working collaboratively with them. I would hate to see this turn into some kind of adversarial process.”

Mayor Hemminger emphasized her confidence in the group but requested that both Clark and Morris push for staff to be more actively involved.

Gu pushed the group for results, asking for deliverables, including impact reports on future developments and stormwater management techniques. She said the council needed these deliverables to help them make decisions about the future.

Councilmember Allen Buansi expressed concern over the lack of an established regular meeting as well as over who is actually being consulted by the group.

“I understand the demographics of the membership [of the working group] and that’s good,” Buansi said. “I was actually thinking more about community members who are not members of this working group. I’m thinking of folks in places like South Estes public housing, which is in a low-lying area. I think it’s important to try to purposefully and intentionally draw on people from these communities.”

She also outlined a number of suggestions for changes Chapel Hill could make to its current stormwater management approach. Some of the proposed changes were small, inexpensive initiatives like updating terminology in Chapel Hill’s municipal code to clarify requirements. Others were broader changes to Town regulations, such as requiring stormwater reuse for irrigation or graywater plumbing.

The council expressed their enthusiastic support for the study and a desire to see it move forward as quickly as possible. Gu said that she was “an enthusiastic yes” on the study.

Hemminger concluded this portion of the meeting by saying she and the rest of the council want to see the study go forward.

As far as what “expeditiously” means, Meumann said the hope was to get “some things done by the end of 2022.”

It may be a while until the Town of Chapel Hill gets its stormwater situation under control but it may soon be getting a splash pad — or two.

You can download the full meeting agenda and presentations or watch the recording of the meeting on the Town’s YouTube page.

Saying Goodbye to a Willow Oak

Be the first to comment on "Water, Water, Everywhere: Council Discussions About Water Management Come to a Boil"