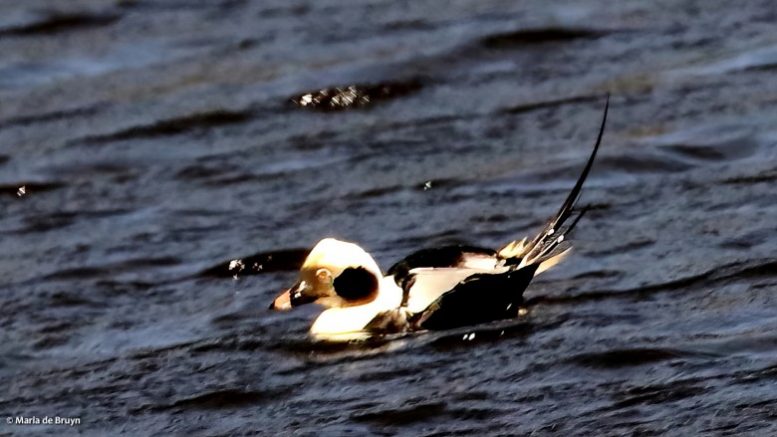 While we generally see “flashier” birds during the spring and summer in the Piedmont, late autumn and winter migrations bring many waterfowl to the eastern half of our state. Most rarer species appear on the coast, enticing dedicated birders to “twitch” (pursue in hopes of seeing them well). This year, birders have been traveling eastward to see birds such as a lone snow bunting (an Arctic bird), harlequin ducks, black guillemots, black-legged kittiwakes and Iceland gulls.

Since my long-distance driving has been limited, I haven’t seen unusual waterfowl this season, but that doesn’t mean a rare bird might not arrive nearby one day. In February 2019, I was introduced to the marvelous long-tailed duck, which visited nearby Wake County.

This bird lives up to its name with a tail feather that is quite noticeable. It also holds a world record as the deepest-diving member of the waterfowl community, having been caught in fishing nets 240 feet underwater! It would be a treat if one of them visited our area again. We do have other interesting waterfowl to see. Double-crested cormorants are abundant, and we can see them swimming and congregating in treetops near lakes. They’re not picky as far as housekeeping is concerned, inserting deflated balloons and plastic debris into their large stick nests. The oldest cormorant known thus far was 23 years of age.

Ruddy ducks and ring-necked ducks (that I always want to call ring-billed ducks instead!) are paddling around various ponds throughout Orange, Durham and Wake counties looking for food. They can drink up to a gallon of water daily and consume up to 12% of their body weight in a day. The ruddy ducks lay the largest eggs relative to their body size of all ducks. One of the more boldly patterned waterfowl species is the male hooded merganser. While the females are mostly grayish brown with some reddish highlights, the males have bold white head and chest patches and white feathers on their back. They nest in tree cavities and the ducklings jump out of the nests when they are only a day old.

Killdeer have a distinctive call and when startled, they fly with their companions in what sometimes looks like choreographed flight. They hunt for food along the shoreline, keeping an eye on nearby humans but not fleeing until a person nears to within about 10 feet.  When brooding their eggs, they try to lure people and predators away from the nest by faking a broken wing as they stumble away.

The larger, impressive Wilson’s snipe is also a shoreline forager, but sometimes they just hunker down among rocks and chill out for a while. They choose spots where they are well camouflaged so that they’re not obvious from a distance. When they do move, their extra-large pectoral muscles enable them to achieve flight speeds up to 60 miles/hour.

The Northern shovelers are distinctive ducks with large flat bills that they use to sieve the water for food. Their spoon-like bills make them easy to identify for beginning birders. Like other ducks, their feet have no blood vessels or nerves, so they don’t get cold feet from snow, ice and winter water. Occasionally, you might experience a bit of distress when spotting a rare bird. Anhingas usually live on the coast, so it is a treat when we get to see them in our area. When one visited the pond at the local Rainbow Soccer Complex, birders were happy to see it, until they realized that the poor bird had a large wad of fishing line entangled around its bill. Fortunately, the anhinga could still open its mouth and seemed able to perhaps catch a few fish or crayfish. It wasn’t possible to get close enough for a rehabber to pull off the line. This sighting was a stark visual reminder that all tackle, hooks and fishing line should be taken away and not left in bushes, in trees or on the ground!

That same pond has been a setting for more delightful bird spottings. Wood ducks, who especially enjoy eating acorns in the fall, like to breed at the pond. They are the only North American ducks that often have two broods a year, and they may begin nesting in late January. They must be vigilant, however. Great blue herons also hang out at the pond, and they have been documented eating wood duck babies.

Large groups of mallards routinely congregate at the Soccer Fields Pond, with very large flocks of red-winged blackbirds, rusty blackbirds, common grackles and brown-headed cowbirds flying overhead from tree to tree. Although they are common, the mallards can be quite beautiful and fun to watch.

For those who are just getting into birding this winter, it can be rewarding to visit local ponds and waterways. The Chapel Hill Bird Club and New Hope Audubon Society both offer guided walks so that you get help identifying the birds you see. Intriguing Insects to Arouse our Wonder

2 Comments on "Waterfowl in Winter"