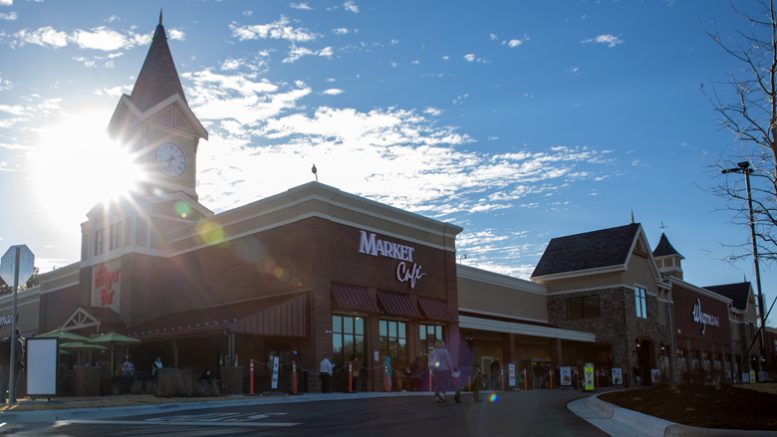 For Courtnee Patterson, the grand opening of the new Wegmans grocery store in Chapel Hill on Wednesday reminded her of family.

Patterson’s aunt lives in Maryland and she fondly recalled the Wegmans cakes that her aunt would give her. The Hillsborough resident woke up around 7:30 a.m. so she could be one of the first in line when the doors opened.

The grocery store chain, based in Rochester, NY, has locations in seven states along the east coast. The Chapel Hill location is just the third Wegmans to open in North Carolina, all in the Triangle. Patterson has been on her own tour-de-Wegmans throughout the region.

“And if another one opens up,” Patterson said, “I’m going to that one.”

Patterson wasn’t the only one excited by the store’s arrival. Before the doors opened, the socially-distant line of early shoppers started at the front entrance and wrapped along the side of the store.

The opening of the Chapel Hill Wegmans, on the former site of the Performance Auto Mall, has been long anticipated. The Chapel Hill Town Council approved the plan for the 99,000-square-foot building in October 2016. It was slated to open in 2020, but construction delays and the COVID-19 pandemic slowed development of the $30 million project.

Last fall, Charles Stehlin, an installation technician at Stanley Black & Decker, worked on the sliding doors at Wegmans. He came back to the store on opening day to fix the sliding doors closest to the cafeteria entrance as patrons scurried into the new supermarket shortly before 9 a.m. “People get excited about Wegmans,” Stehlin said, “because a lot of people from New York live here. … Wegman’s is a pretty good company and they have good food; the first grocery store I’ve ever seen with a cafeteria.”

Although a cafeteria is standard for all Wegmans, the new Chapel Hill location is the first store to have a marché, a high-end sandwich and salad bar, already embedded, according to Marché Team Leader Erin Dugan.

Dugan, a native of New York, has worked at Wegmans for six years — starting when she was 16 years old — and said that the opening day rush never goes away. “The buzz of the new store opening is just as exciting,” Dugan said. “Because in Buffalo, Wegmans is embedded in your life, it’s blood. It’s been there since I was a kid. So, seeing the excitement of new faces who’s never seen a Wegmans before, — super exciting.”

For Hillsborough resident Joan Thompson, Wednesday was the first time she shopped at Wegmans. Thompson heard about the buzz prior to the grand opening, and said the store was awesome and she enjoyed that it was filled with fresh fruits and vegetables.

“I just couldn’t wait for it to open,” Thompson said. “I’m glad it’s here. … I’ll probably spend half of the day (at Wegmans).”