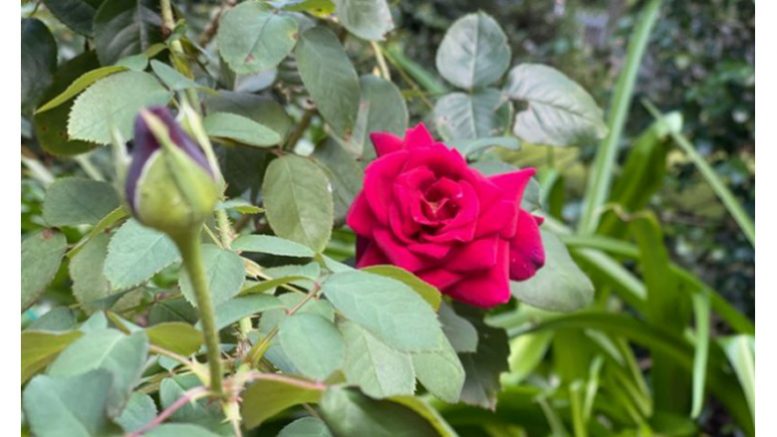 I love the change of seasons—it’s really that simple. When I walked through the garden the other day to congratulate the plants on surviving the summer, I noticed fresh movement. The perennials had visibly relaxed as the nights are now regularly in the 60s and life is easier.

The Itoh peonies are getting ready to say goodnight. When this happened last year—the first year I’d had them in the ground—I panicked. These intersectional peonies, named after the Japanese nurseryman who hybridized them, start to fade by the end of August in our zone 7 gardens. A marriage between the tree peony and the herbaceous peony, Itoh peonies are handsome, albeit expensive, worthwhile additions that grow well here. Just know that they depart early only to reward you come spring. Once they have died back, cut them and be patient.

I know I keep on blathering about Hosta “Branching Out,” but this Plant Delights introduction is simply fabulous. It’s now on its third year and is blooming like crazy. Because hosta cultivars bloom at a different time, I have discovered that this is an important attribute in choosing them for the garden.

Once they have bloomed, figuring they have done their part in an effort to set seed, hostas start fizzling out. This is not always desirable as some hostas bloom in late June—who wants plants to start shriveling in July? I’ve found that the later the hosta blooms, the perkier it will remain throughout the summer. “Branching Out,” fortunately, is one that waits to bloom until the third week of August. The flowers last a while so I expect to have this hosta looking fresh until the middle of September.

Now not all hosta blooms are white, albeit most of them are. “First Blush” has an intriguing lavender flower that looks lovely when contrasted to the green leaves. I know hostas are the ultimate deer candy, but I successfully grew them in pots near the house before I installed the fence. They would also look good in pots situated on a deck that receives morning sun and some afternoon shade. For years I have grown Begonia grandis as I have a special fondness for begonias, especially those that are tactful enough to return year after year. I have two B. grandis: the original one from Niche Gardens produces pale pink blooms, while the other I think is B. “Pink Teardrops” and is a keeper. Reaching a height of 24 inches, this begonia becomes a vital part of the perennial border at a time when some of the other perennials are flagging.

This begonia will seed and while ordinarily I am opposed to seedy plants, this is one I call a tactful seeder. It seems to know where it’s wanted but, more importantly, if it misjudges its welcome, it’s very easy to pull out (or to dig up for friends).

The roses started stirring in mid-August as nighttime temperatures lowered. Roses typically take July off when temperatures soar to 95 degrees. It’s lovely when they reawaken, although please do not confuse this early fall reawakening to the spring profusion. In the early autumn, rose flowers are typically smaller and less bountiful than they were in May.

If you are growing sustainable roses, you want nice flowers with disease-free leaves. Two of my favorites are “Dark Desire” and “Beverly.” Both are classified as hybrid teas but my “Dark Desire” (which Kordes, the hybridizer, states will reach a height of four feet) is secretly in its heart a climber. After putting out strong canes year after year, she obviously needed a trellis so she now resides against a handsome six-foot trellis as her canes soar to over nine feet.

“Beverly” is a more mannerly hybrid tea, remaining at four feet in height. Both roses, ones I never spray, have demonstrated beautiful disease-free leaves and both are putting out lovely blooms. And, both have a delicious fragrance. What more could you ask of a rose? For more information on Kordes roses, see http://www.kordes.us/.

I have an aversion to staking plants, avoiding it whenever I can. Consequently, I quickly became disenchanted with dahlias as most of them required expert staking, a class I feared I flunked. Then I came across the Gallery series offered by Brent and Becky’s Bulbs. These dahlias are smaller and shorter and thus require no staking. They are pretty good about returning in late May, although I’ve had some who have decided they no longer are interested in seeking my hospitality after a couple of years.

What I love about them is that these dahlias bloom throughout the summer but still have the energy to continue until the first frost. I then cut them back, covering the tubers with mulch. Order them in February and plant them in the spring.

The last plant I shall talk about is Clematis virginiana. After lusting after C. ternifolia, a.k.a. Sweet Autumn Clematis, a clematis that on first sight will seduce you but is on second sight an exotic invasive, I bought our native species of clematis. C. virginiana climbs on top of a tall Camellia sasanqua (which is summer dormant), blooms at the end of August or the beginning of September and then is cut back. It makes the flamboyant statement I’m yearning for and then goes to sleep.

Learn to read your plants throughout the different seasons. After all, that’s what gardening basically is all about. And, please note that I managed to write this article without mentioning Spigelia marilandica once.

The Need for Garden Democracy