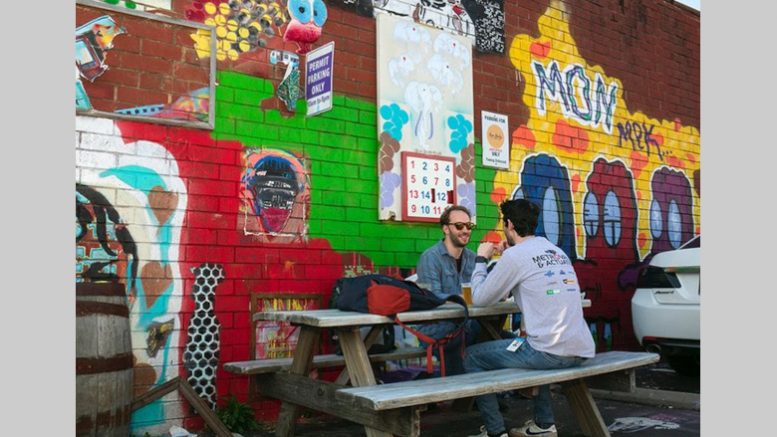 The Chapel Hill-Carrboro border, one block east of where Franklin Street melds into Main Street, is home to a concentration of creative energy and retro-innovation where the businesses are chic – nerd-chic – in the best possible ways. Consider: a bustling beer garden, a busy thrift store and a red coffee trailer, historic music venue Local 506, and the art space above it, Attic 506, as well as smaller but thriving art studios in the area. There’s Italian Pizzeria III and Al’s Burgers on the corner — the best pizza and burgers in town, some say. Then around the corner there’s Syd’s Hair Shop, Baxter Arcade, oh, one of the best bagel joints around, Brandwein’s Bagels, on the corner of Graham and Rosemary. This block is called Midway, and helping to add new energy to the scene is, Wendy Mann, who grew up in Chapel Hill in the seventies and eighties before plunging into the art and nightclub world from LA to New York. She soon met Luva Zacharyj, another Chapel Hill wanderer, and who became the perfect partner for business and art adventures. Zacharyj had also grown up in Chapel Hill in the eighties, and returned after circumnavigating the country, developing a dual career as a bar manager and a vintage seller. In 2019, Local 506 co-owner Rob Walsh asked her to come in to discuss a role there. That role would eventually turn out to be that of co-owner. Local 506 has several music acts lined up for September and they’ll sell-out fast. In the last few years Midway has come of age. More than just the demarcation between two small towns, Midway feels like its own village now, with personality and joie de vivre all its own.

Brandwein’s Bagels has brought delicious New York-style bagels to Chapel Hill. But more than that – it’s a welcoming spot to meet, hang out, and relax. The bagels are made fresh daily, traditional bagels in a variety of flavors as well as a number of mouthwatering deli sandwiches. Plenty of bagel chips, homemade salads, and Gray Squirrel Coffee is available to round out the menu. Tin Cup Joe is right down the block. This red trailer serves an exceptional cup of coffee, Monday through Friday 9-5 and Saturday 10-4. Thanks Chris Jordan, who owns the Tin Cup, for blending herbs, flavors and real cream into a cup of java that checks all the boxes. In June, the Midway area will welcome Franklin Motors Beer Garden to the corner of Franklin and Graham. The brainchild of longtime restaurant and club manager, Mike Benson, there will be a full restaurant on site serving sliders, chicken wings, burgers and vegetarian options. The fully licensed ABC bar will include a roof deck, picnic tables, ample parking and stay open year-round. Benson said he is eyeing late-June 2021 for a grand opening. And just announced: Chef John Smith, originally from Austin Texas, will open a food truck to accompany their selection of local beers, wines, and craft cocktails. It will be called Roquette at Franklin Motors and serve a delicious and bold cuisine of locally sourced meats and vegetables.

At Midway Market, there will be craft markets on second Saturdays with vendors selling art, handmade jewelry, clothes, crafts, and more. Food, beer, and coffee from the block’s plentiful restaurants will be on hand. So will live music.

COVID-19 stalled the launch. But the Market plans to return every other Saturday until demand warrants going weekly. And given the vibrant and deeply lived-in character it’s infusing into Chapel Hill, it well might. Stay updated on this and other developments through the downtown Chapel Hill website at: https://downtownchapelhill.com

Midway’s local businesses have opened their doors to the streets, melding private and public space and building bonds of togetherness. Coming to Midway, strolling into the one story red-brick buildings that line historic Graham Street, you get a feeling that Midway provides a hipster vibe with a Carolina edge. Check-out these businesses.