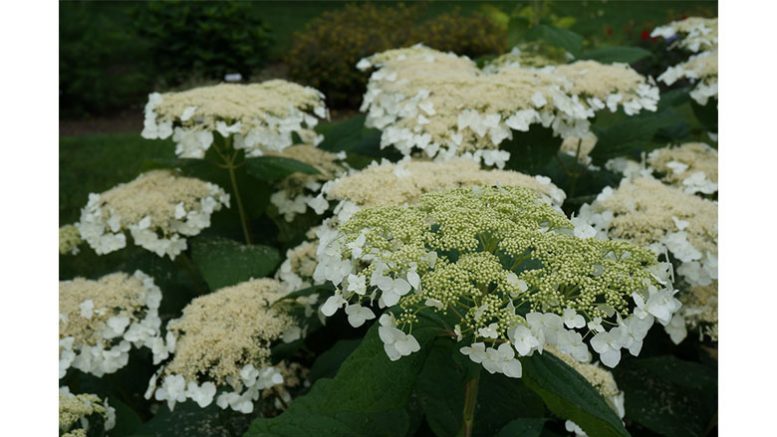 Hydrangeas are confusing creatures. Some bloom on old wood while others bloom on new wood. Some bear lacecap flowers while others have mophead blossoms. Some are native, while others are exotic. This is enough to make a gardener’s head spin. However, help is on the way.

In the horticultural world, it’s always a big deal when the Mount Cuba Center issues their latest report on the testing of a particular native plant. Their report on Echinacea, for example, was invaluable because garden centers swarm with the latest hybrids, making it difficult to determine which ones are survivors and which are just one-season wonders. The latest report details the Center’s findings on our native hydrangeas.

While many hydrangeas originally arose in Asia, there are three that are American-born: H. arborescens, H. cinerea and H. radiata. All bloom on new wood, allowing gardeners to prune from the fall to the early spring without any danger of destroying the flowers of the next growing season. These long-lasting flowers come in two forms: lacecap and mophead.

The Center’s 5-year trial took place in both full sun and 60% shade with examples of all three hydrangeas cut back to 6 inches in late March. The curators also observed pollinator activity in an effort to discern which hydrangea attracted the largest number of visitors.

H. arborescens “Haas’ Halo’ took the top spot. Sporting large lacecap flowers, it proved to be flawless in both sun and shade, even tolerating pruning that kept it at 4 feet in height, rather than allowing it to grow to its natural 7 feet. Five others received 4½ stars and two received 4 stars so there were plenty of recommendations to choose from. Two of the oldest cultivars, H. arborescens ‘Annabelle’ and H. arborescens ‘Grandiflora,’ settled in the honorable mention category because they both have the tendency to flop due to their large, heavy flowers. A pink mophead developed at NC State — H. arborescens ‘Incrediball Blush’ (aka ‘NCHA4’) — received rave reviews. The Center’s study tells us that this particular cultivar, which was only 4 feet tall, grows best in sun but refrain from pruning it as the weakened stems tend to sag.

On the whole, lacecaps appear to attract more pollinators than do mopheads. This is probably attributable to the fact that the latter bear fewer fertile flowers than do the former. However, not all lacecaps attracted pollinators, so if this characteristic is important to you, be sure to review this study. It is worth noting that few butterflies were attracted to any hydrangeas.

Most hydrangeas performed best in light shade although there were some pink-flowering hybrids that did well in the sun. As for pruning, while all these hydrangeas tolerated a severe trim, the Center concluded that gardeners had little need to cut them back on a yearly basis and that only the oldest canes should be removed.

For those who want to emphasize native plants in their gardens, this is a useful study to peruse before purchasing a hydrangea because a hydrangea typically will remain in the garden for a long time if it is happy. During the growing season, it will be a focal point, hopefully a lovely one.

One advantage to having a hydrangea that blooms on new wood is that, at the end of summer, when the plant might be overgrown, you can safely prune it back, something you should not perform on the nonnative, widely available H. macrophylla and H. paniculata that bloom on old wood. If you cut back the latter hydrangeas at the end of summer, you will end up with a dearth of hydrangea blooms in the following growing season.

One word of warning: After a study comes out, it can be difficult to find the recommended cultivars. When the Mt. Cuba study on Echinacea appeared, for example, it was virtually impossible to find their top pick, ‘Pica Bella,’ because hardly any vendor carried it. It’s now available at Plant Delights, who also now offer two of the highly rated Baptisias, ‘Screamin’ Yellow’ and ‘Lemon Meringue’ from the Center’s Baptisia study. Just remember that it takes growers a little while to catch up with the demand.

If you are in the market for a hydrangea, be sure to look at the Center’s study because it will help you to decide which one will work for your garden. I’m all in favor letting the experts do my research for me.

After being an active member of the Durham County Extension Master Gardeners for 13 years, Kit Flynn now holds emeritus status. For five years she was the gardening correspondent for “Senior Correspondent” and shared “The Absentee Gardener” column with fellow Master Gardener Lise Jenkins. She has given numerous presentations on various gardening topics to Triangle organizations and can be reached at howdoesyourgardengrow@icloud.com