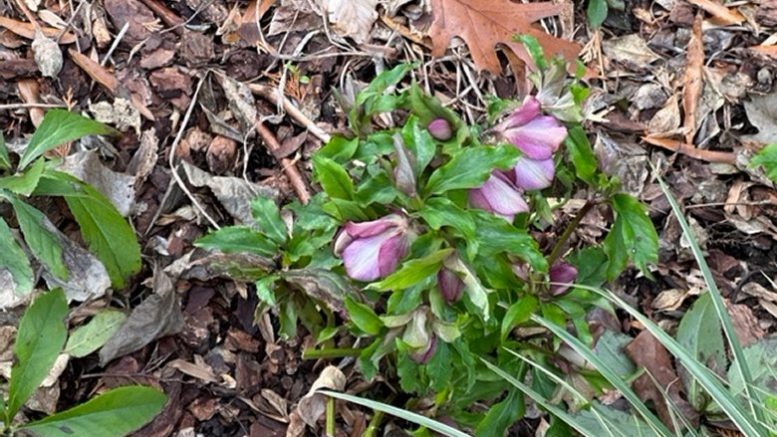 A Helleborus x hybridus in flower. Photo by Kit Flynn.

About five years ago, bedbugs were a hot topic. In fact, I became rather paranoid on the subject because apparently once they are embedded (sorry, couldn’t resist) in one’s house, they are impossible to remove. During this period of bedbug fixation, I was travelling to New York. Fearing the potential of a dreaded bedbug infiltration, I even used an online bedbug registry that listed all the hotels and apartment buildings reporting bedbug infestation. Then, as quickly as bedbugs had made the headlines, they rapidly disappeared—along with bedbugregistry.com.

Actually, that website still exists, but since the copyright notice ends at 2019 and the blog sits empty, I question how up to date it is or if the bedbugs just gave it up that year.

But wait! According to Orkin’s worst bedbug-infested cities list, Raleigh-Durham moved up four spots to the #20 position.

The seemingly rapid disappearance of bedbugs reminded me of the appalling lack-of-fiber-in-the-American-diet that permeated the news in the 1980s when apparently, to our colonic detriment, we weren’t eating enough fiber.  Jane Brody of The New York Times contrasted the size of the average American output to that of the average African—and we woefully came up lacking. Just as it was with bedbugs, fiber had become no longer a hot topic.

But wait! Fiber is, indeed, back in vogue—not Vogue necessarily—but at least in Eating Well. Since that online article shows its number one benefit of fiber as “healthy weight loss,” maybe fiber can get us into Vogue.

All this caused me to think of plants that were highly promoted thirty years ago only to fall by the wayside. The highly poisonous Datura and Brugmansia come to mind. Both were widely offered—and I defy you to find them now at North Carolina nurseries. Datura had a short shelf life in the horticultural headlines simply because it was an annual here, refusing to bloom in what it considered a short growing season.

Brugmansia was more tolerant of our climatic conditions although it came with some troublesome requirements. It disliked tap water, the water that runs out of our hoses, insisting that the water should be “seasoned”—that is, put in a pail for 24 hours. This enabled the water to release its noxious chemicals. However, few of us keep pails of water around as this provides the perfect birthing area for mosquitoes.

It also would bloom only upon maturity, while dying back every winter. So, the roots could survive, but most of us ended up with non-blooming adolescent Brumansias. Another requirement dictated that we couldn’t cut back the dead branches until spring because the winter rains pouring through the holes would drown the roots. Clearly, this was a plant that wasn’t worth the trouble so it disappeared. I have faith it’s growing well somewhere—just not in North Carolina’s Triangle.

Do you remember when Helleborus orientalis was a hot item? I can well remember driving up to Pine Knott Farms in Virginia to buy this miraculous plant that bloomed in February and March, thereby tempting us with thoughts of an early spring. Suddenly H. orientalis disappeared under the umbrella of H. x hybridus. Alas, the magic disappeared when the babies arrive, and arrive they did. Homeowners began announcing grandly and generously that they would give away these magical plants—you only had to come and dig them up. Notably, there were few takers.

Now, digging up H. x hybridus is no easy feat as these plants are deep rooted. By the time the babies appear—a two-year process—they are firmly rooted. It is not fun to pull them out. The upshot is that, in an effort to prevent more offspring, many of us are compelled to cut out the flowers at their height of bloom. Wise nurseries now offer hellebores bearing descriptions of “barren” or “sterile” to entice gardeners.

We can still buy them with a promise of unique flowers. The problem is that they hybridize very easily, making up their own colors so the offspring usually end up producing a muddy pink or a dingy green color rather than the parental tinge that originally enticed us.

And then there is the case of the Bradford pears. Pyrus calleryana “Bradford” was introduced in the US in the 1960s but really took off during the 1980s and early 1990s when it was planted seemingly everywhere in the Triangle. While Callery pears in general are heavy seeders, the hybridizers promised us that Bradford pear were sterile.

Alas, while the Bradford pear spurned other Bradfords, it happily paired up with different Callery pears to the point where it is now considered invasive. Thirty years later there are few remaining Bradford pears that haven’t been destroyed by storms; thankfully, they are on their way out, never to return.

Now you might wonder why I began this article with the subject heading of bedbugs, only to end with Bradford pears. News, like plants, tends to be cyclical. No one thinks bedbugs magically have disappeared—they just left the public consciousness for a time. I’m sure sometime fiber-in-our-diet will resume its place of concentration—and apparently that time is now.

To prove my point, I just perused the new Plant Delights catalog online and noticed that Tony Avent includes six cultivars of Brugmansia. Obviously, what goes around, comes around. Don’t say I didn’t warn you about the return of the mighty bedbug.

Be the first to comment on "What Ever Happened to Bedbugs?"