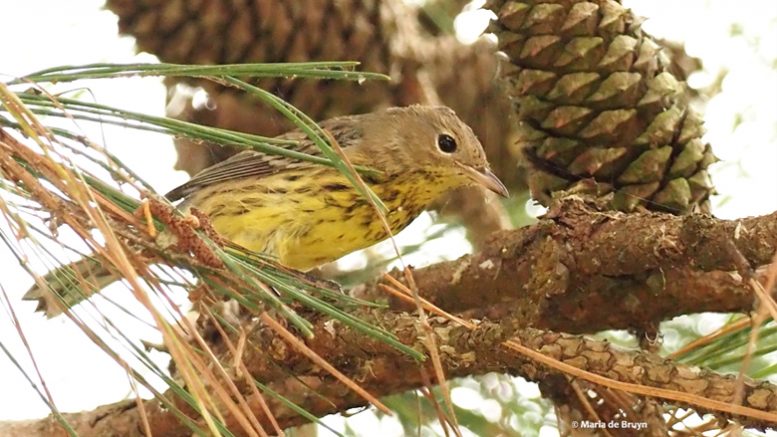 People who are “into birding” are excited when they see a new bird for the first time. Many keep “life lists” — an account of each different species they have actually seen worldwide, in the United States, in their state or perhaps in their yard.

When they see a new species, it’s said they got a “lifer,” a first sighting in their life. Quite a few of these birders then decide to enjoy a reward — a lifer pie!

Doc Ellen Tinsley, the N.C. Piedmont’s main bald eagle researcher, also looks for other species when she goes out to see the eagles she knows. On Sept. 27, she was at the Jordan Lake Dam, where she often sees eagles whom she has come to recognize and know. Since it is the migration period for many birds that breed up north, she was also watching for warblers, a popular type of songbird because they are often beautifully colored.

She counted herself very lucky when she spotted a yellow striped bird that she had not seen before. After getting a confirmation of its scientific identification, she notified area birders that she had spotted a Kirtland’s warbler and it was still foraging so people might be able to see it if they came to the dam. Until recently, the Kirtland’s warbler (Setophaga kirtlandii) was considered an endangered species as it requires a very specific habitat in jack pine forest to breed. It depends on areas affected by fire, which regenerate with small trees, shrubs and open areas for suitable places for its nests.

Compared to other birds, the Kirtland’s has the most restricted geographical breeding area of any bird in the continental United States. Because conservationists in Michigan, Wisconsin and Ontario, Canada, collaborated on protecting its environment, this warbler has now been re-designated as a threatened rather than endangered species. There are now about 2,300 breeding pairs who migrate south to spend the winter in the Bahamas.

It’s likely that now at least 100 people have traveled to Jordan Lake Dam to see this female bird. She has been very popular because she doesn’t particularly hide as some birds do. She was foraging for insects along rocks bordering the dam area and in nearby trees, which gave the birders an opportunity to memorialize her visit with photos. Much of the time, she was seen in the company of a male bird of the Cape May species, who look similar. The Kirtland’s warblers’ nesting areas in Michigan and Wisconsin are closed to the public when they are breeding. They are rarely seen, so there are guided tours in those two states to enable people to spot them. Doc Ellen therefore provided area birders with a wonderful opportunity to admire this rare bird! A much-needed bright spot in a year that has been fraught with calamities.

Look here to find out more about the Kirtland’s warblers:

Be the first to comment on "What gets birders really going? A rare bird!"