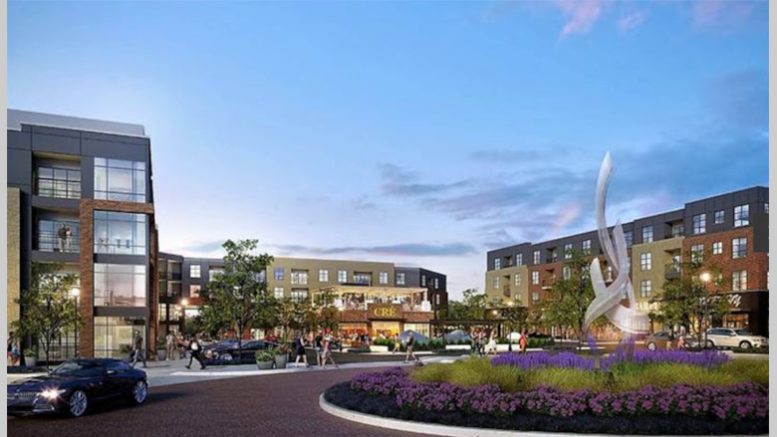 The Chapel Hill Town Council approved Aura Chapel Hill at the northeastern corner of Estes Drive and Martin Luther King Jr. Boulevard. Trinsic Residential Group will build 419 apartments and townhomes and at least 15,800 square feet of commercial space. Over 3 acres will be dedicated to public green space, including a central plaza with fenced-in playground, a Central Park for holding activities and events, and a Woodlands natural area around a stream on the site.

Under the current plans, Aura will include:

Construction will start in 2022, with completion late 2023. Construction traffic will feed from MLK, not go on Estes. The town is starting on its ped-bike improvements to Estes this summer. Aura development from the corner of MLK, Jr. Blvd and Estes Drive

An architect’s drawing shows how future storefronts and related green spaces could look at the redeveloped University Place shopping mall.

Chapel Hill Town Council approved modifications for University Place that allows buildings up to 90 feet tall on part of the mall site on South Estes Drive, and up to 75 feet tall in another part to allow for new apartment units. The redevelopment completion is expected by 2028.

The current site plan will split the redevelopment into five “pods.” A New Library in Carrboro

The 203 Project, an upcoming facility that will house Carrboro’s first, full-time library, underwent financial and construction plan changes in the past six months. The project is set to open in late 2022 at 203 S. Greensboro St. and will house the Orange County Southern Branch Library. Additionally, it will be home to town recreation and parks offices, a teen center, and county government offices. Orange County Commissioners voted at a March 2 meeting to allocate an additional $1.8 million to the project after rearrangements were made to the building and parking deck design, increasing its cost. The ArtsCenter in Carrboro is set to build a new home across from OWASA near the intersection of Jones Ferry Road and Barnes Street following the purchase of the 1.3-acre site in January of 2019. The new site will include studio and performance space, as well as parking. According to Daniel Mayer, the ArtsCenter’s executive director, the new two-story building will take advantage of its natural setting, incorporating arts into the environment and preserving over 30 percent of the existing trees – largely surrounding a stream that cuts across the eastern half of the site.

In December, a new Visitor Welcome Center will open in the heart of downtown Franklin Street when the Chapel Hill/Orange County Visitors Bureau relocates from its current space at 501 W. Franklin Street. The new Center will include a welcome video from former resident James Taylor, and a music video featuring Taylor singing “Going to Carolina in my Mind.” The new space will include 3-D maps of Orange County, a music wall, and information on Hillsborough and Carrboro, as well as Orange County farms. The Visitors Bureau is an Orange County office funded by the hotel occupancy taxes left by visitors to the 1600 hotel rooms throughout the area.