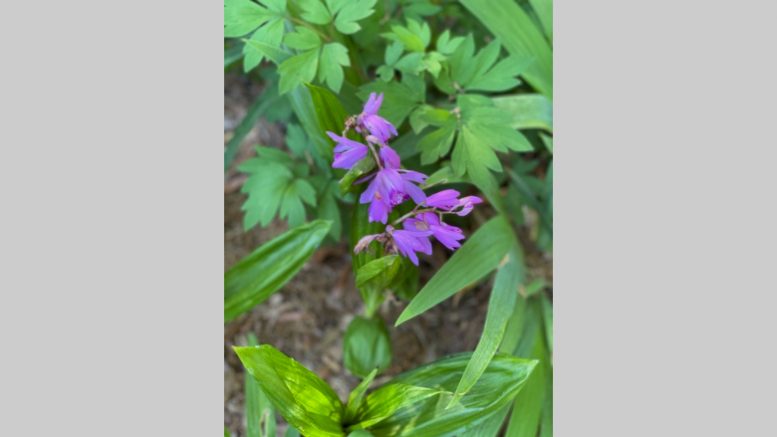 In the delirium of winter, I tend to go on an ordering spree of plants that will arrive the following April. It’s a good time to order because the nurseries haven’t yet run out of the hot new plants; the winter garden looks relatively bare; and there’s nothing much to do in January, especially during a pandemic.

However, come April there arrives a conundrum: What on earth did I order? What I’m talking about are the unknown (to me) plants I ordered. This year Gentiana seeped into my consciousness in January only to move out of it by April. “What on earth is a Gentiana,” I ask myself. When I look up the description, I have to ask myself, “Why did I order three of them?”

Some of the items make sense. The three smallish Allium Pink Planet will make nice edging plants — and I can make room for attractive edging plants. The Aspidistra elatior will eventually become a pleasing clump near my hosta bed. I was spurred on when I saw how attractive the two large Aspidistra clumps had become (it only took five years).

The Bletilla striata I understood as this hardy orchid doesn’t take up much room but will expand in three years’ time. However, then I see on a separate order with a different nursery that I have ordered an additional five Allium Millenium — not a typo; that’s how this allium was registered — and three Bletilla striata. What on earth was I thinking? I also ordered five Amarcrinum, a bulb I absolutely adore, but one that takes up some space in the garden. Again, what was I thinking? If this happened to me only once, I would just put it down to aberrant behavior, but I, alas, find myself in this pickle every year. There are several reasons for this. In the winter, I forget that I have run out of room in the garden. The garden looks relatively bare, and while I have carefully marked most of my plants, it simply doesn’t register in my aging mind that, come April, I will have to hunt hard for an adequate space to plant new orders. It’s the equivalent of buying size 6 jeans when you really need a size 14.

The second reason is that, by November, I am ready to say goodnight to the garden. I’m past admiring it; I am more than ready to turn out the lights and shut the door. By January, I’m itching to see greenery. I want to see the Edgeworthia in bloom; I am looking forward to the Viburnum taking over the early spring garden. This is the time that pictures in the garden catalogues tend to trip me up.

And the third reason is that I’m simply overcome with lust.

The sad fact is that the more established a garden becomes, the less room there is for experimentation. Some of the roses I have ordered in the past I had to place in less-than-optimal conditions (meaning areas with less sunlight available) precisely because there was no longer any space available for them in prime rose-growing areas.

I could take a rose out to make room for a new one, but I have a strict rule that roses must be given a chance — and by a chance I mean three years – before I can decide it’s not a good boarder in my garden.

Established gardens get shadier as they age. Where there once was full sunlight, there is now what I can only describe as sun/shade areas. In winter and early spring, these areas still look quite sunny, but when the leaves arrive, these areas change. Where once I could happily grow lilies and roses, I now plant Polygonatum and Bletilla.

So, this year I’m making my New Year’s resolution in April: There will be no impulse ordering in January or February.

Have the Courage of Your Gardening Convictions

Beware of the Floozies

The Trades We Make

Be the first to comment on "What on Earth Did I Order?"