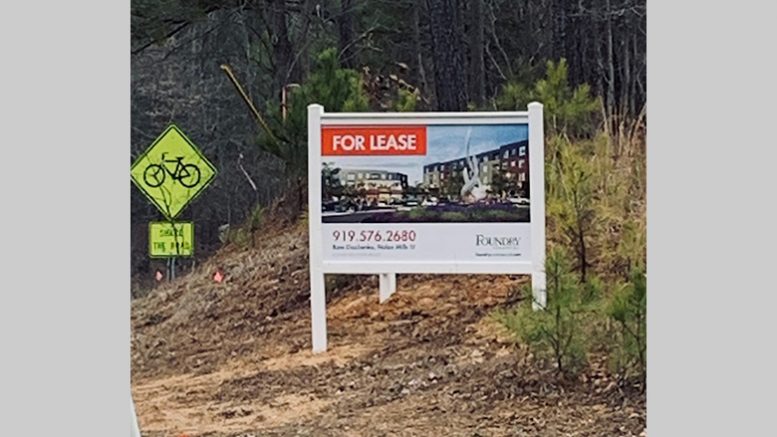 Have you heard of Trinsic Residential Group? It’s a pretty considerable Texas real estate outfit seeking to build a large mixed-use development (400 apartments and townhouses; 650 parking spaces) called AURA, to be sited on the 15 acres of stumps and ugliness left from a clear-cut tree farm at Martin Luther King Jr Boulevard and Estes Drive. To fulfill its ambition and add to Chapel Hill’s creeping urban blight that began with the Blue Hill District, Trinsic needs a Conditional Zoning permit from the town — which it is in line to receive at lightning speed. Hence, the distinctive aroma of something fishy. . . .

Why would a Chapel Hillian care about Trinsic and AURA? With only three east-west arteries for traffic (Estes, Franklin/Rosemary Streets and Weaver Dairy/Homestead), everyone who lives in Chapel Hill would be impacted by the increased traffic congestion this complex — if approved and built — would produce, regardless of the mode of transportation they might be using.

The proposed AURA development is projected to produce an estimated 2,950 daily trips in and out of the development. Yet the traffic impact plan, based on surveying traffic for less than a single day, claims that there would be minimal traffic impact. The survey results, produced by the consultant selected by the town, but paid for by  the developer, Trinsic, and — so far — blessed by town traffic officials, are questionable. Any driver trying to navigate Estes Drive from Franklin Street on a rainy afternoon when Estes Elementary and Phillips Middle School are in full session knows better. So do emergency vehicle drivers needing to get down what is, after all, a two-lane road. For the safety of the children alone, this traffic issue must not be brushed aside or left to the assurances of town staff or developer-hired consultants.

One hint that something untoward was afoot and that the town was very interested in promoting AURA came to light when a group of concerned citizens in the Somerset area, in tandem with the Chapel Hill Alliance for a Livable Town, sent 51 questions to the town in November that specifically addressed potentially dangerous traffic impacts, i.e., dangers posed to children attending the nearby schools, Estes Elementary and Phillips Middle School, the YMCA Day Care and Amity Church. (Some questions also addressed issues such as stormwater problems, housing density and tree canopy.) Until early March, however, these questions drew only silence from the town. Meanwhile, the Somerset group, now organized as Estes Neighbors, has rapidly grown to include 12 neighborhoods (www.estesneighbors.org).

A second sign of Trinsic’s confidence that it will receive a rezoning request for AURA came in early February, when two imposing “For Lease” signs appeared at Estes/MLK. These signs are soliciting renters for a projected complex that has not yet received rezoning approval and is not due to be completed until 2023. The town, however, has seen fit to schedule advisory board meetings, essential for the rezoning process, in rapid succession, mostly funneled into the month of March. The most concerned citizen would not be able to attend all these meetings, some of which overlap each other.

But here is the most disconcerting aspect of the town’s position: The chairperson of Chapel Hill’s unique Community Design Commission appeared at the Housing Advisory Board meeting on March 9 and at the Enviromental Sustainability Advisory Board meeting on March 18 as the paid representative of Trinsic, touting the merits of its AURA project. Town officials are evidently quite content to turn a blind eye to the ethical implications.

There is still reason to believe that the town can be steered to listen to its citizens’ objections, but only if all of us who are concerned engage our friends on this important issue. In short, Estes Neighbors needs your support: AURA’s conditional zoning permit application to change the land’s classification is currently racing toward the Town Council — and a seemingly-guaranteed final approval.

Steve Fleck is a resident of Mt. Bolus in Chapel Hill.