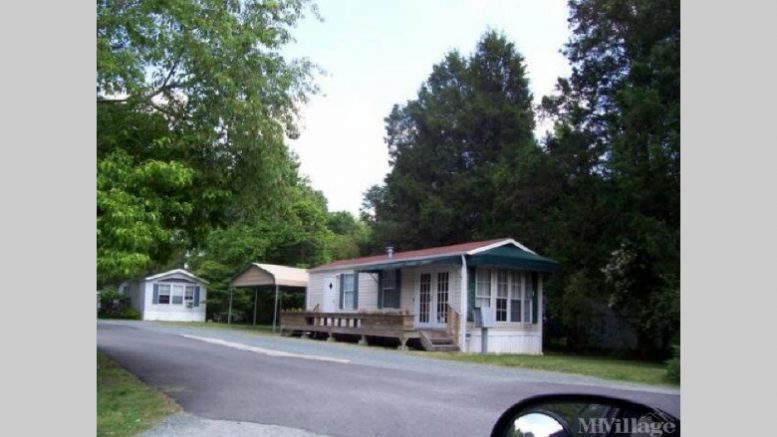 Residents of four mobile home parks, comprising 162 units on prime real estate in northern Chapel Hill, live under the threat of being “depopulated” to make way for redevelopment. And the Chapel Hill Town Council can do little to intervene.

The town can’t prevent a landowner from selling, although the council does have control over whether to allow land to be rezoned for denser development. Rezoning raises the value of the land significantly and can provide impetus for mobile home park owners to take profits.

So, what’s the best way to protect vulnerable residents of a mobile home park? That was the question when Stackhouse Properties asked the council to rezone Tarheel Mobile Home Park on Dec. 9.

The council was first forced to reckon with the housing vulnerability of mobile home park residents nearly three years ago, when Hanover Co. asked to rezone 10 acres on Weaver Dairy Road occupied by the Lakeview Mobile Home Park. Hanover wanted to replace the 33 mobile homes with more than 300 apartments, some townhouses and a small retail space. The developer promised to make 45 apartments affordable to a four-person household making less than about $59,000 a year.

Lakeview residents turned out in force at that council meeting, saying they did not want to give up the mobile homes they owned for apartment living and paying rent higher than what they paid for the mobile home pad and utilities.

The council expressed enough concern about displacing the residents that the developer did not pursue the purchase. The park owners, Gregg and Lori Ireland, are still seeking a buyer.

Rather than seeking to replace the existing structures with very profitable luxury apartment high-rises, the Stackhouse partners felt they could preserve the home sites for low-income residents and upgrade the store to be more of a mini-grocery if they could add a self-storage building to make the operation financially viable. By moving some of the mobile homes to an open field on the property, all but about a dozen homes would be able to remain on site.

The plan Stackhouse presented to council earlier this month committed to preserving for 15 years the 65 occupied mobile homes (seven homeowners had left in the past two years), and if the town would allow siting some units in the Resource Conservation District — several units had been in the RCD since the park opened some 40 years ago — it would have space for 17 more mobile home owners who would be displaced by redevelopment of nearby parks.

At a Nov. 19 community meeting, Tarheel residents gave feedback to Stackhouse about the proposed redevelopment. Generally, they “like the project and [are] happy with it,” according to the meeting minutes.

Mayor Pam Hemminger acknowledged that “this is a complicated issue and affects some of the most vulnerable people in our community.”

But she pointed out that while the council was committed to helping residents of the mobile home park, “at the same time, we’re voting on the Future Land Use Map tonight that supports higher density along the [Bus Rapid Transit corridor] to meet our climate goals and support growing as a community.”

She recommended continuing the public hearing until Jan. 27 “to hear from staff what it means to lock this property down for 15 years.”

People without a Social Security number can apply for a mortgage as long as they can demonstrate they pay taxes in the U.S. People from Canada or Mexico don’t have to provide proof of residency in the U.S.

With approval for a mortgage, borrowers can purchase a home in a private sale on the open market. But they would not be able to purchase a subsidized home from a nonprofit that receives federal funds because of the restrictions accepting federal money involves.

Habitat for Humanity requires all purchasers and their dependents be legal residents of the U.S. Community Home Trust’s charter doesn’t specifically exclude undocumented buyers, but the local nonprofit is similarly bound by federal restrictions on subsidies to immigrants. An order signed by President Trump last year further restricts access to federal benefits by immigrants, and specifically cites U.S. Department of Housing and Urban Development to review who receives federal housing assistance.

According to a survey conducted by Orange County in 2017, the majority of mobile homeowners earn less than $30,000 a year. Average rent for a pad was less than $350 a month, and utilities added a little over $200 a month more. Ninety-five percent of mobile home park residents who responded to the survey were very happy with their living situation.

In a telephone interview after the council meeting, Hemminger explained that HUD said owning a mobile home is not a desired long-term solution to housing affordability. A mobile home is a depreciating asset and does not build wealth through home equity.

Nevertheless, more than 82 percent of the Orange County survey respondents said if they were forced to relocate, a multifamily apartment would be their last choice, and 80 percent said they would not want to move outside the Chapel Hill-Carrboro town limits. Many respondents said documentation status was a significant impediment to finding affordable housing.

Dan Levine is business development director at Self-Help Credit Union in Durham, which makes loans to borrowers that conventional lenders might avoid. He said regardless of immigration status, “income is a big issue.”

“There are a lot of reasons why people live in mobile home parks,” Levine said. “Sometimes it’s by choice, and sometimes they don’t have any other options at that price point, or it’s the only way to be able to afford to own a home, even if it doesn’t have a lot of value as an asset. It may be the only way to feel that sense of ownership in a pretty expensive housing market.”

Council member Karen Stegman wondered whether the town could purchase the land from Stackhouse “to truly protect the neighborhood and keep the mobile home park safe and the residents secure for the long term.”

But the law is murky on whether the town would be able to set up a vehicle, funded solely by local taxpayer dollars, to build permanently affordable housing and loan money to any undocumented residents to buy those units.

Stegman wanted to learn about the options. “I want to ask whether the applicant [Stackhouse] is willing to take some time to meet with staff and think about it a different way,” she said. “We need to think about this differently in order to tell this community we are going to keep you together in an affordable community.”

The council voted unanimously to put off voting on the rezoning. But postponing a decision on the Stackhouse proposal runs the risk that in the interim the Tarheel park will be sold to a developer who has no interest in operating it. Such a prospective buyer has already reached out to Stackhouse, Jewell said.

“There’s not another park in Chapel Hill that couldn’t be sold tomorrow, and all the leases terminated, and all those residents asked to go,” Jewell said. “We’re offering something extraordinary. If it is the town’s goal to protect these folks, … this proposal we’re offering is the best path forward.”

When Schooling Was Still Segregated

2 Comments on "What’s the future for mobile home parks?"