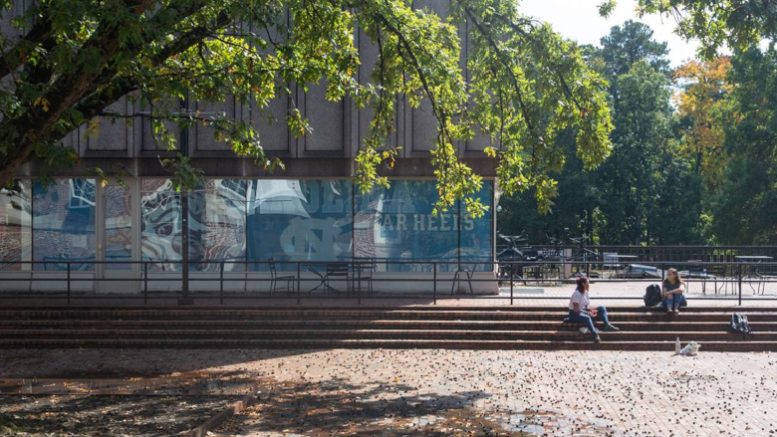 Students Sophie Therber and Camryn Kepley sit on the steps of the Pit. In pre COVID-19 times, the Pit would be overrun with people sitting on the steps, walking to class or the dining hall or just saying hello to friends. Photo by Hanna Wondmagegn.

Sabrina Zirkle walks through a quiet and barren university campus, reminded of the energetic commotion that once was. Its emptiness overwhelms her. She writes down her feelings, for that has given her clarity in the past.

It’s odd to live in a ghost town, she writes. … In painful contrast to the space we created for ourselves, the empty shells of cafés and restaurants littering the street like the casing of bullets.

There’s a certain bleakness in certain empty spaces. A pandemic, which shows no signs of an end, moved classes at UNC-Chapel Hill from lecture halls to kitchen tables with a full switch to online learning in August. Fewer than 1,000 students remain on campus. Without their energy, a walk through campus is eerie.

UNC is certainly bleaker now, and certainly emptier. Students Sophie Therber and Camryn Kepley sit on the steps of the Pit. In pre COVID-19 times, the Pit would be overrun with people sitting on the steps, walking to class or the dining hall or just saying hello to friends.

In 1969, a man-made crater was left behind following the construction of a surrounding bookstore, student union and undergraduate library. Two trees were planted side-by-side in the center, and the basin was deemed, “The Pit.”

Decades later, the red-bricked Pit remains an indispensable staple on campus, its trees providing shade and shelter for students gathering for lunch, preachers waving their Bibles at passersby, and clubs recruiting future members.

It’s fall. The two trees have begun to lose their leaves, blanketing the Pit in shades of yellow.

But the leaves look different this year. They are full and crisp, a rarity in a center for commotion; the usual foot traffic of 20,000 undergrads that would quickly trample them has subsided. There are no students gathering, no preachers proselytizing, no clubs recruiting. No reason for the shade and shelter.

A tour guide marshals two high-school-age boys through the space. The father of one follows closely behind.

“This is the hub of campus, where Tar Heels come to study, be with friends or just sit alone on a nice day,” she tells them, as they walk through the Pit. “When you’re freshmen, you’ll see what I mean.”

The wind whips away a brochure from one of the boy’s hand. It rolls along the brick like a tumbleweed. Empty chairs and tables sit on the path between the Carolina Union. Photo by Hanna Wondmagegn.

Michael McFee, a UNC alumnus and English professor, used to spend his days teaching in Greenlaw Hall. The last of the class buildings that line the quad, Greenlaw is wedged between the undergraduate library and Lenoir, the central dining hall.

In stark contrast to his past life in a classroom, McFee teaches poetry to students staring back at him through a webcam. He misses the joy and spontaneity of human interaction. He longs for that feeling again.

“I’ve had losses in my life,” McFee said. “This is one I think I feel more than almost any other. If it’s not like death, it’s being in a terminal illness. We’re all sort of suspended. We’re all on life support, and we’re going to make it to the other side, we’re going to get there, but in the meantime we’re in the limbo. And it’s not really a fun place to be. It’s frustrating. It’s exhausting.”

Beyond the steps of Greenlaw Hall, the walkways that were once filled with life are jarringly still. Chairs along Lenoir are stacked atop their tables. Some have been taken away. Umbrellas remain permanently collapsed, stiff from their months of disuse.

Socially-distanced tables are scattered in front of the student union. Its intended purpose is in its name, unifying students in a central place of shared collaboration and learning. Most of these tables are vacant, except one, which sits beside a skinny tree.

Here sit roommates Maggie and Katie, masked despite no one else around. Both graduate in December, and their time on campus is dwindling.

“I like that it’s a bit quieter,” Katie said. “Sometimes the hustle and bustle of campus can get almost claustrophobic and overwhelming. But, after a while, isolation takes its toll.”

They come to campus together at least once each week. Maggie longs for the way it once felt, when campus was a home and people surrounded her. Despite its post-apocalyptic feel, when the stragglers walk by and remind her of life, Katie feels a bit of normalcy again.

“Just seeing that there are other people alive gets me out of the catastrophizing mindset of, ‘This is the end,’” Katie said. Kelly Holloman stands behind the counter at Alpine Bagels, located on the bottom floor of the student union. She’s always worked every day, but lately, she is only needed for half-days.

“I can help whoever is next,” she calls out every so often, though there are rarely two people in line at once. A force of habit, maybe, or a sense of normalcy.

Coming to work is different now. Before, tables would be packed from open to close, students stalking the booths like prey, for they knew if they didn’t someone else would take them. Now, only five or six people come in per day. She misses her regulars.

Holloman and her coworkers mingle in front of the merchandise, the spinach-parm bagels on special growing staler. Lunchtime is coming. Maybe they’ll see an order or two. Maybe they won’t.

Busy days pass quickly, a blur of faces coming and almost going too quickly to remember who is who. Slow days drag you down, the minutes feeling like hours.

“I used to be more excited about coming to work because I knew I’d be busy, and I’d have a lot of people,” she said. “Now it’s boring, and just like, ‘Eh, OK. I guess I’m coming to work anyway.’”

This kind of quiet is different.

Numbered desks and rolling chairs are placed in rows six feet apart on the ground level. Sectioned off in zones labeled by color, the only available seating on the only available floor can be reserved online. Only three people sit in the library today, each claiming an entire colored-zone.

This kind of quiet is just empty.

There are no whispering freshmen who are only halfway studying for an intro-level drama course. There are no panicking nursing students, whose only comfort lies in the shared anxiety of their peers. No one is annoyingly smacking gum, clicking pens or tapping feet.

There is only the droned humming of fluorescent lights, occasionally interrupted by a rhythmic squeak. It’s the left wheel of the librarian’s cart.

She’s putting the books in storage.

The bell tower tolls. Its ringing sounds closer than usual — it doesn’t compete with as much noise anymore.

On this warmer-than-usual October afternoon, a slight breeze tickles the hair on your arms and whispers in your ears. The sky is free of clouds. The grass is welcoming.

It is the perfect day. There should be Frisbees flying by, dogs playing fetch and picnic blankets covering the lawn. There should be people squeezed together in groups, laughing and enjoying the weather.

And yet, the quad is quiet.

The flagpole, where students are allowed to smoke, stands alone. It misses the colorful conversations of youth who aren’t ashamed to publicly smoke cigarettes.

Every so often bikers and skaters fly down the bricked pathway. No students to dodge, no reason to slow down. The divots and chips in the old red bricks are their only obstructions these days.

A group of three girls sits beside a tree, choosing one of many shaded spaces up-for-grabs, atop yellow and white blankets. Salem comes to the quad with her friends to remember that life is still happening, that school still exists despite not feeling real.

“When I first got here, I was like ‘I’m not at school, I don’t feel like I’m here,’” she said. “So, coming to campus with other people kind of motivates me and shows me like, there are still people in the same position that I am. Which makes me feel better about the situation.”

They are the only ones here today. Perhaps tomorrow they’ll have company.

“I taught at Cornell for a while,” McFee said. “You know, pretty school. It’s a very different place, because, never at Cornell ever, did I see the sort of energy and engagement in the quad.

“Friends seeing each other, hailing each other, sitting down in the grass to talk. They didn’t have a place like the Pit, which is this hub of activity. The interaction on the quad is just different. It’s heavy.” The flagpole at the quad. Onpre-COVID-19 days, it was common to see people congregating and smoking together at what was known as the smoker’s flagpole. Photo by Hanna Wondmagegn.

Someday, at Some Time

For now, the stillness is unnatural.

But the thing about these certain empty spaces is: they’ll be filled again. Abandoned houses find new owners, blocked-off highways eventually reopen and stadiums will fill when the season comes around.

“It’s like the air has been let out,” McFee said. “And I can’t wait for the air to be let back into it.”

Someday, the umbrellas will open, the bagels will sell and the books will return to their shelves. Normalcy will take its place. And this certain empty space will be whole and full, a world of opportunity for students to come.

Maybe in time, Sabrina Zirkle writes, something new can grow in the empty battlefield. And tendrils of life and smell and voice can climb toward the sun.