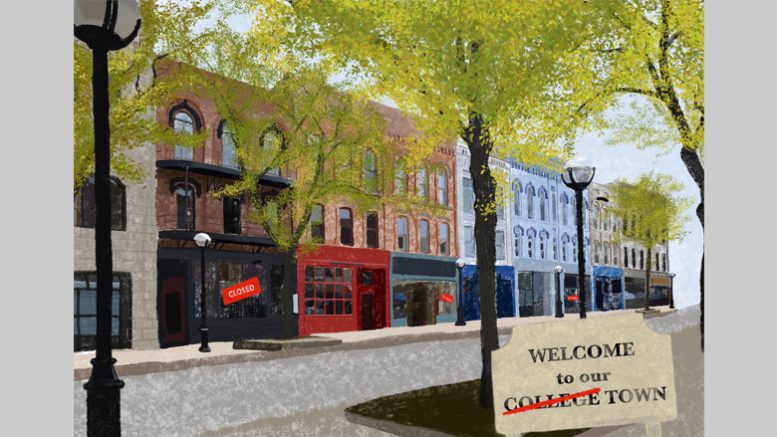 Little victories help Matt Gladdek get through the day. Take the afternoon of Oct. 1, for example.

He stopped at Four Corners to get lunch and asked the owners if the new deck in front of the restaurant was attracting customers. As executive director of Chapel Hill Downtown Partnership, he’d overseen the sidewalk expansion program that let it happen.

It was, he said, a little victory.

Before lunch, he stopped at Imbibe, the Cajun kitchen around the corner from Four Corners.

He wanted to speak to Mandey Brown, the owner, about the new to-go parking spot in front of the business. As they spoke, a couple parked and picked up its takeout order.

Before Brown came Paula Gilland, CEO of Purple Bowl, known for its acai bowls and smoothies. And before Gilland, came another business owner, preceded by another, and so on.

For Gladdek, these conversations have defined the past six months of his life. These little victories are the result of constant planning and strategic meetings to help businesses stay afloat.

Despite his organization’s efforts, a long list of downtown Chapel Hill businesses, once packed with students and football fans, have permanently closed.

“While it’s been hard for me, I know it’s worse for all those who have put their blood, sweat and tears, in some cases for multiple generations, in their family businesses, that are doing everything they can to stay afloat,” he said.

Chapel Hill is not alone in this crisis. Businesses in college towns such as Ann Arbor, Michigan, Athens, Georgia, and Bloomington, Indiana, have all seen large decreases in revenue as universities moved online.

Now the town is trying to look ahead — past the little victories and toward a long-term post-pandemic economic recovery process. However, being built around UNC-Chapel Hill, which moved fully online after COVID-19 cases exploded in student residence halls and fraternities, complicates the town’s plans.

Unlike large cities or other small towns, college towns have to strike the balance between maintaining strong ties to their universities while developing a local economy that won’t collapse if the universities shut down due to COVID-19.

Chapel Hill Mayor Pam Hemminger knows how fragile this balance can be, and how hard it is to achieve.

“I’ve had several discussions with other mayors talking about the same thing, that it’s the downtown at the intersection of the college and the businesses … talking about the effects when (the university) is your major employer downtown,” she said. “It’s just devastating right now.”

Hemminger’s long-term strategy to recover from the pandemic, she said, is the same one she’s followed to boost the town’s economy since she came into office five years ago: focus on building commercial space and a strong private business scene — not one dependent on public institutions.

“That’s not healthy for any community; you need to have other businesses, other large employers,” she said.

The strategy requires getting out of what Gladdek called a “nine-month economy and make sure we’re in a 12-month economy.”

Dwight Bassett, economic development officer in Chapel Hill, said business growth has been the town’s focus for the past 13 years.

“If you grow up in Chapel Hill, and you have a child that graduates from the university, there’s a limited opportunity for them to even think about staying in Chapel Hill, because there aren’t tremendous job opportunities,” he said. “And our goal is to change that.”

In pursuit of that goal, the town council just approved the construction of a new parking deck downtown and an office building which officials hope will bring up to 800 jobs to the area.

Hemminger said the town has also developed a series of incentive packages to attract businesses such as Wegmans, a supermarket chain, and Well, a health technology start-up.

As for the college town businesses that have remained open during the pandemic, Gladdek said their strategy has been to establish deep ties with the local community — not just students.

According to Emil Malizia, professor in the UNC Department of City and Regional Planning, “anchor institutions,” such as a university, will always be the main driver of a college town’s economy.

“Whatever else we can do, we’re kind of playing around on the edges,” he said. “I mean, if there’s a major reduction in force at the university, or at the hospital, which is possible, hopefully won’t happen, there’s not much we can do.”

Regardless of the recovery strategy college towns choose to implement, their biggest concern is the uncertainty surrounding the pandemic.

Gladdek said he feels “as if the rug keeps on getting pulled out from under you.”

“Right now you’re predicting how to just get through it,” Hemminger said. “And then, how do you recover out of it?”

Proposed Short-Term Rental Law Would Have No Teeth