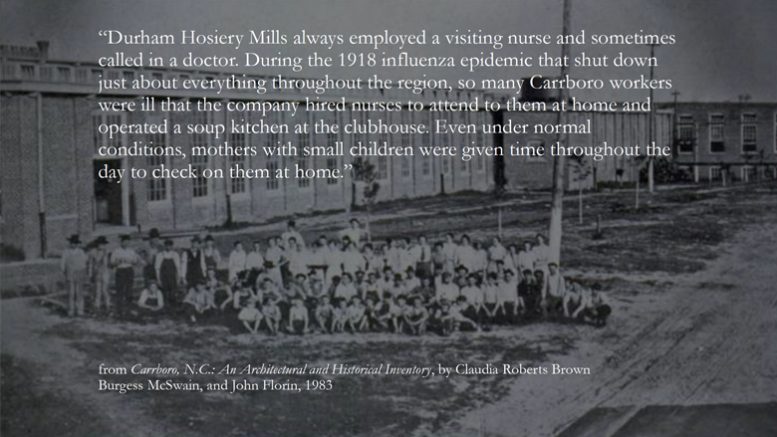 COVID-19 is not the first pandemic to strike our community.

When the influenza pandemic of 1918 hit Orange County, it arrived to a remarkably different place. Carrboro was a mill town, the University of North Carolina had fewer than 1,000 students and Chapel Hill had about as many residents. There was one infirmary, on UNC’s campus, and four doctors. World War I was in full swing and dominated life in Chapel Hill.

“Training had already started happening in Chapel Hill and on the UNC campus. Some of the faculty were even enlisted in the military,” said Sarah Carrier, a North Carolina research librarian at UNC’s Wilson Library Special Collections. By spring 1918, the Student Army Training Corps, a federal program targeted at preparing students for military service, was already established on campus.

“They had students rooming alongside their units. They even dug trenches east of campus,” said Carrier, who has given a presentation on the local impact of the 1918 pandemic. “We’re talking about school starting and all of these students receiving their uniforms … a lot of students were drafted.”

By the end of 1918’s fall semester, thanks to the war in Europe, the student population had dipped well below 1,000.

It was against this backdrop that the first cases of influenza hit North Carolina. The outbreak that started in Kansas in March 1918 reached this state in early October. Starting in Wilmington, a large port city even in the early 20th century, the virus rapidly spread across the state. By Oct. 9, the first death near Orange County was announced by a Durham newspaper.

Here the record begins to get murky. Neither Chapel Hill nor Carrboro had a newspaper at the time, and the precursor to The Daily Tar Heel was more limited and not yet a daily paper. “We really just have the student paper and Durham papers to work from,” Carrier said.

She explained that we do know that citizens rapidly banded together and created a county board of health. The public was already relatively organized after Gov. Thomas Bickett had ordered every county to establish a war preparedness board early that year. On Oct. 7, before the first recorded death in Durham County, all schools and churches were closed for the foreseeable future.

However, the edict did not initially apply to UNC.

In fact, a University Day parade went on as scheduled on Oct. 12. Edward Kidder Graham, the president of UNC, was in attendance. He had spent the days leading up to the event writing letters, assuring parents that neither classes nor the parade would be cancelled.

It would be one of President Graham’s last public appearances, as he caught the virus and died Oct. 26. His immediate successor, Marvin Hendrix Stacy, would suffer the same fate only a few months later.

UNC was quarantined in early October, and at some point after Kidder’s death, classes were cancelled. Students did not return for the spring semester in 1919.

What likely lessened the virus’ impact was that a large part of UNC’s already small student population was either training on military bases or in the European theater by fall. It’s likely that a number of students caught influenza while serving, and that those who died were not recorded by campus sources.

According to official records, only seven people died from the influenza pandemic in Chapel Hill, with 500 infected in total. However, these are just the cases recorded by the campus infirmary. Many residents, especially those in rural areas, never made it there.

“Honestly,” said Carrier, “if the state and people had not been mobilized for WW I and new councils and organizations hadn’t been set up to get people mobilized and supporting the war effort, from what I can tell, it would have been a lot worse.”

Town Facilities Closed to the Public