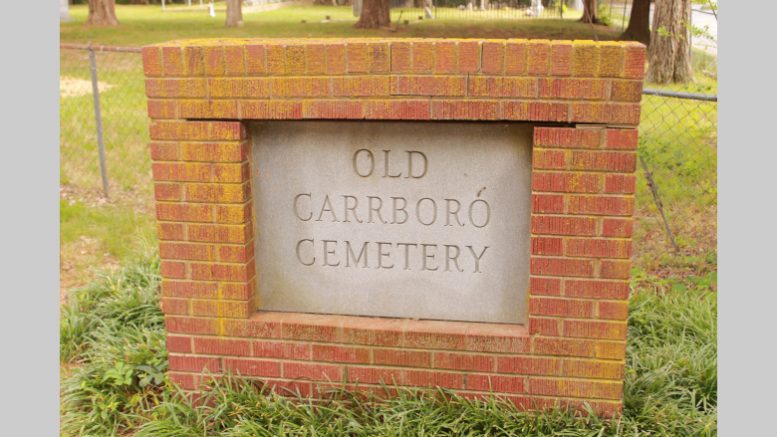 Chapel Hill is getting out of the cemetery business, but Carrboro is creating more space. (Photo: Dylan Phillips)

Essentially, the lone reason for Chapel Hill’s lack of burial space across the board is due to dwindling available land.

Chapel Hill Memorial Cemetery has no traditional burial plots available. Residents who want to be laid to rest there must be cremated and have their remains placed either in the ground or in the columbarium — a room with individual compartments for funeral urns.

In-ground crematory plots in Chapel Hill Memorial Cemetery cost $350 for Chapel Hill residents and $700 for non-residents, and two urns can be interred in the plot. A columbarium compartment at the same cemetery costs $1,100.

The Town of Chapel Hill has done its best to keep space available in town cemeteries, but Lane said town staff’s efforts don’t meet the demand of residents. The columbarium was intended to fill the gap.

“We had the columbarium installed to appease the public, but the majority of the people that live in Chapel Hill do not want cremation, they want full casket-size burial,” Lane said.

However, outside of Chapel Hill, Chad Hefner, manager and funeral director at Walker’s Funeral Home in Hillsborough, said the demand for traditional burials is, seemingly, waning.

“I’ll be honest, it is not as much of a want as it had been in the past; … that’s not nearly chosen as much these days,” Hefner said. “Cremation has become more chosen over the years.”

Lane added that residents who belong to a church with a cemetery can be buried there, often for little to no cost.

Still, Chapel Hill is running out of in-ground plots in its public cemeteries, forcing many folks to seek alternatives. Many are going to the town next door, where they can still be buried how they want, as well as near where they really want to be. Finding burial space was not a problem in the past; now, people need to reserve a plot ahead of time to be placed near where they lived. (Photo: Dylan Phillips)

A different story in Carrboro

In Carrboro, both town-controlled cemeteries have space for traditional burial, as well as plenty of cremation plots. In March, Carrboro proposed upgrading Westwood Cemetery by building a columbarium and ossuary — an underground common vault where urns of ashes are interred.

Additionally, although demand is currently low, Carrboro has plans for a green burial space in Westwood Cemetery. Green burials can be done already at Old Carrboro Cemetery.

“There’s no embalming fluid, it’s all natural, and they’re typically buried in a cloth or a natural pine box, something that will naturally decay over time,” said Kristen Benoit, Carrboro assistant to the public works director.

“People are starting to ask more and more about green burial, and there are a few cemeteries that do offer the true green burial space, but those are few and far between,” Hefner said. “So, that’s sort of limited right now, but I do think that will be more of an option in the future, because there’s a growing desire to have something like that.”

The cost of a traditional burial plot in a Carrboro cemetery is $750 for a resident/property owner and $1,500 for a non-resident/non-property owner.

And, given that Chapel Hill town cemeteries are essentially out of room, many folks have begun to buy up those plots in Carrboro.

“We have seen an uptick in the last six months to a year,” Benoit said. “Some of that could be that Chapel Hill is out of space, so people are buying closer in Carrboro. Maybe it is because we’ve had some increased deaths because of the pandemic, obviously.”

Zones 1 and 2 are at capacity (Zone 1 is a 99 percent; Zone 2 is at 96 percent). Zone 3 is around 58 percent full, with roughly 200 spaces remaining. Zone 4, an area of about five acres, has not yet been staked out for plots, and is therefore 100 percent vacant currently.

However, Benoit said Carrboro residents have voiced opinions that the green space in Westwood should stay undisturbed.

Schmadeke went on to explain the details of the plans for the potential Westwood Cemetery redesign.

If the master plan is implemented as presented, it would contain a columbarium, an ossuary and a natural burial parcel with a mulch path. The upgraded cemetery would hold 5,200.

The construction costs are estimated at around $1.7 million; the revenue the renovations with expanded capacity would bring in $7.7 million.

Hefner said the best way for folks to ensure they are given the type of burial they want is to plan ahead.

“Definitely purchasing that cemetery property beforehand would make it more [likely] that a person will be able to have their wishes fulfilled,” Hefner said.

In Chapel Hill, that’s what a lot of people did a while back. Because now, if someone who desires to be buried in a Chapel Hill town cemetery but hasn’t buy the plot ahead of time, chances are, they’re out of luck.

“The burials that we’ve had, they already had plots that they purchased a long time ago or something like that,” Lane said. “But lately, it hasn’t been one where there was emergency burial.”

She said she got a few calls recently requesting a traditional burial plot, but had to turn the people away due to lack of space.

Doing It On Her Own: Kate Franklin’s Blindness Won’t Stop Her

Be the first to comment on "Where Do We Go When We Die?"