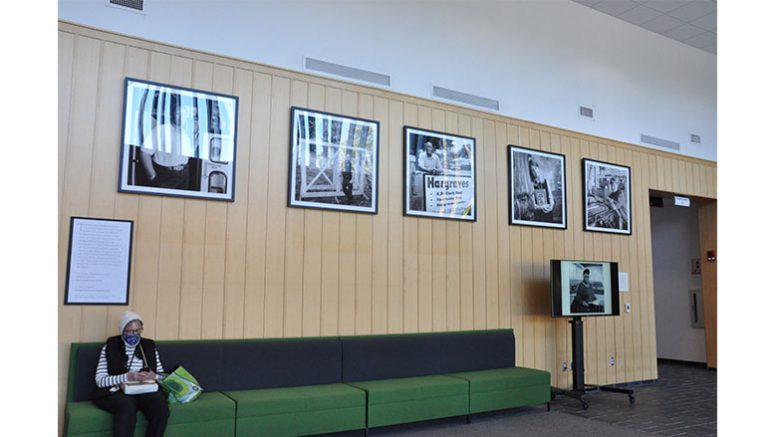 Photos from the exhibit "Chapel Hill Works" on display in the lobby of the Chapel Hill Public Library. Photo by Kylie Marsh.

As you enter the Chapel Hill Public Library’s lobby through a set of sliding glass doors, you’ll be greeted by five large, glossy black and white photos of unassuming faces. The subjects in the photos are not prominent celebrities, but they play an important role in the work of the Town of Chapel Hill.

Newly retired sociologist Michael Schwalbe’s arresting series “Chapel Hill Works” highlights the Town’s employees who are responsible for keeping Chapel Hill running smoothly in over 118 medium-format film photographs, a digital slideshow, and a short documentary about the making and importance of the series.

Schwalbe started the project in 2015, intending to explore the theme of repair by photographing people who fix various machines such as iPhones, sewing machines and clocks.

But it proved difficult to find subjects interested in participating in the project. “I had a heck of a time recruiting people,” Schwalbe said.

That summer, he read an article about urban infrastructure in a British sociology journal which argued that cities are constantly undergoing repair.

“Cities are always breaking down,” Schwalbe said. “I thought, why don’t I set aside this repair project and look at the phenomenon of collective effort” involved in our local municipal operations?

As one of the nation’s quintessential college towns, Chapel Hill has long been synonymous with UNC. For much of its history, the municipality was a rather modest entity that lived in the shadow of the much larger University. Although the Town’s government was established in 1819, the first mayor was not elected until 1895 and the first Town Hall was not built until 1938. After WWII, as Chapel Hill’s population grew and the municipal government provided an ever-larger range of services—library, public transit, recreation, road maintenance, building inspections, land-use planning—the size of the municipal workforce grew accordingly. Today the Town government comprises over 800 employees across 15 departments. Additional photos from the exhibit on display on the library’s lower level. Photo by Kylie Marsh.

“The University does dominate cultural, political and economic life in Chapel Hill and often overshadows everything else,” Schwalbe said. “It’s time to shine a light on other things like the employees who get the work done.”

Schwalbe pitched his idea first to a Town Council member, who arranged a meeting with then-Town manager Roger Stancil and his top aide Rae Buckley.  “Some people understand documentary work, and other people wonder, ‘Why do you want to take a picture of me?’” Schwalbe said. Stancil and Buckley were sold on the idea and assigned library experiences specialist Sarah Wagner to serve as project liaison and help communicate the project’s goals to the Town’s leadership.

“I couldn’t imagine doing the project without her,” Schwalbe said.

The project turned out to be “more of an adventure in some cases than others,” Schwalbe said. On some days he tagged along with crews responsible for leaf pickup and snow plowing, sometimes at 7 in the morning with no more notice than a last-minute call the night before. On another occasion, the Town’s firefighters happened to be testing out a new truck, so he explored it with the crew while capturing their photos.

For Schwalbe, part of the fun of photography is being able to discover what others don’t usually see. In the library, for example, “there’s acquisitions, book repair, and all this other work,” he said. “The camera is a license to go ‘backstage’ if you will.”

Schwalbe says asking him which photograph from the series he likes most is “like asking ‘who’s your favorite child?’” but he acknowledged a particular affection for the framed prints on display in the lobby and lower level of the CHPL.

The exhibit was supposed to launch in 2020, but the pandemic threw a wrench in that plan as it did with everything else. After being delayed more than a year, Chapel Hill Works is on view at the library through the end of the month.

“I had the rough cut of the video ready in 2019, but it would be strange with no mention of the pandemic,” Schwalbe said. The 14-minute mini-documentary now includes a section with Town Manager Maurice Jones speaking about Town’s adjustments to the pandemic. 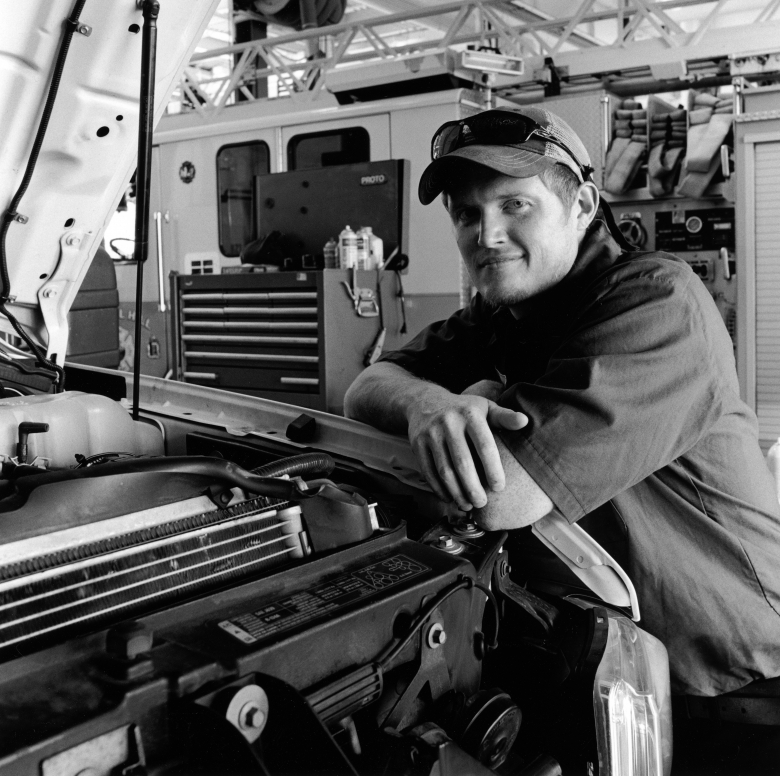 Be the first to comment on "Who Makes Chapel Hill Work?"