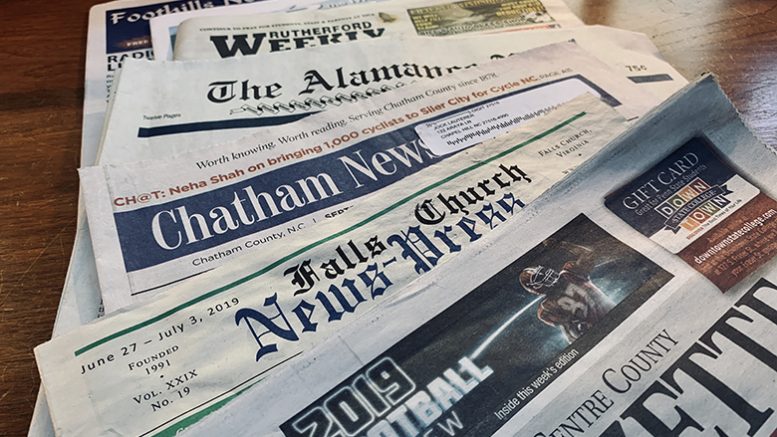 Other communities, some much smaller than ours, have their own community newspapers. Why can’t we? — Staff Photo by Jock Lauterer

Losing the Eyes and Ears

When McClatchy closed down our newspaper in 2017 I was bereft. I felt like I lost the eyes and ears that connected me to the community.  As the song goes, “you don’t know what you’ve got till it’s gone.”

A newspaper issue is a snapshot in time and space.  It represents how we are now at this moment on this day or this week.  More than that it is tangible evidence that we “just are.” It’s an artifact that as a community we matter: that we communicate; that we share common concerns; that we can speak; argue; commiserate and celebrate together. Good deeds can be praised and wrong-doing exposed.  People can see what to do, where to go, and what’s going on.  And they can hold that information in their hand or at least, in this digital age, they can go and get it in one place.

We don’t have that anymore and we should have it, because any vital community should have it.  Chapel Hill, arguably –especially– the home of a great university, where many dramas of statewide and national importance play out should have it.

A newspaper is the original virtual plaza, market place, and public forum. Of these, I miss most the public forum where journalists and citizens are keeping a close eye on the workings of government.  Even in a community such as this one, where public officials are mostly honest and well-meaning–without a newspaper, I feel like we are flying blind.

Informing Us of Actions

I have spent 40 active and giving years in this community because a local newspaper led the way to knowledge about and then caring for “my community.”

We need a newspaper that informs us of actions being considered by our town leaders and local government, so I support wholeheartedly the movement to begin one in Chapel Hill/Carrboro.

The Need is Evident

When I moved to Chapel Hill in 1959, one of the first things I did was to subscribe to the Triangle newspapers: The News and Observer in Raleigh, The Herald Sun in Durham, and of course, The Chapel Hill News.

Much has changed since then. Now the Durham newspaper is almost a carbon copy of The News and Observer, both owned by the same company.  You don’t need to subscribe to both. The Chapel Hill News no longer exists.

It is indeed surprising that there has not been more complaining about not having a local newspaper. Apparently, it has not been missed, but at last, there has emerged a group which believes that the absence of a newspaper is unacceptable in a town of our size.

The Daily Tar Heel is primarily a covering of the University campus and the limited issues of the Chapel Hill magazine does not claim to be a community newspaper. I confess that after nearly 20 years, I only learned that there is an Orange County newspaper in Hillsborough but it has almost no attempt to include what is newsworthy in Chapel Hill.

We can be grateful for the rising feeling that there IS a need for a paper committed to covering of whatever is newsworthy. The need is evident in many ways. Chapel Hill has so many people whose opinions would be great for sharing, and we would all benefit from reading them.

We would no longer have to look for obituaries in The News and Observer. A local newspaper would also provide needed publicity for many events such as the annual Apple Chill street fair in Chapel Hill and the Community Dinner in Carrboro.

I am convinced that there’s much activity here that we may never know about. I am also convinced that despite the movement toward digital papers, many people would still prefer hand held newspapers.

I hope mayor Pam Hemminger and the members of the Chapel Hill Town Board will publicly express their strong support for The Local Reporter. Obviously, to move forward on this project, we will need generous funding.

The slogan of the New York Times should be our goal, and that is to cover “All the news that’s fit to print.”

The Fabric of Activities

Why might Chapel Hill and Carrboro miss a local newspaper?  Plenty of worthy reasons, of course, that others are sure to supply, so I won’t bother with them. My reason is going to seem frivolous unless I can convince you otherwise.

The local paper that we received regularly when my wife and I arrived in a much smaller Chapel Hill in 1964, The Chapel Hill Newspaper, had all the worthy things you might expect and that I’d like to see in a resurrected local paper:  local news, local sports, high school and university, and intelligent editorial comment.  But it had a regular feature (whose title I can’t now remember) that was essentially a society column, edited for thirty years by Paquita Jurgensen.  She wrote about parties and dances, about trips people had taken, about guests who had come to town and trips her friends had taken, about weddings, about bridge tournaments: about all the recurrent events, public and private, that punctuated the lives of townspeople.

A very young faculty member, I read it with initial condescending amusement and yet, as I read it week after week, year after year, recognizing the names of people I was coming to know, I found it knitting me into the fabric of village activities and acquainting me with my neighbors and their lives–rather like Facebook today, perhaps, but in a local and more trustworthy vein.  I feel wistful now, missing that regular window into the mundane events of ordinary lives that a local newspaper can provide.

I have lived in this warm and smart community since 1980, and enjoyed a local newspaper for much of that time, because local news is important for our daily lives.

Events at the university and the graduate schools help us educate ourselves and be better citizens; school news helps our children and their parents and grandparents plan and engage;

arts activities in the Triangle, movies playing in our cinemas, and museum/botanical garden/library offerings can reach more people through local calendars and criticism;

different people, different ideas and cultures can learn about each other and reach understanding beyond just tolerance.

These are just a few of the reasons to renew our local journalism. I hope this will be a successful new beginning.

Thank you for your attention.

What Chapel Hill Needs and Deserves

The Chapel Hill Newspaper existed from 1972 to 1992, when it was absorbed by the News and Observer and renamed the Chapel Hill News; since then it has largely vanished as a separate entity, and has had to compete for reporting and story coverage with all the other local reporting in the greater Raleigh-Durham metro area. As a result, only a very few Chapel Hill stories get published.

Chapel Hill is a vibrant and growing town and university community, with far more newsworthy events happening than ever get covered: issues and controversies before the Town Council and other civic decision-making bodies, school news and sports events, business and social news and other locally important events, as well as university speakers, performances, and campus issues that would be of wide interest to the community.

In short, Chapel Hill very much needs and deserves its own newspaper and reporting capability. I am delighted to welcome the first issue of The Local Reporter, and hope many others will recognize its value and importance and give it their support as well.

Oates is the Choice