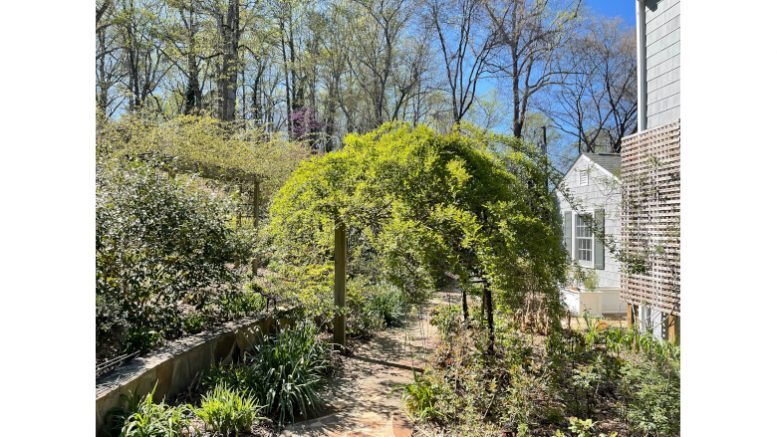 Throughout my gardening career, I have always periodically asked myself one important question: Why do I garden? Now, I’m not asking, “Why do I bother?” Rather I have to redefine in my mind the reasons I spend so much of my time thinking about plants.

When I first became interested in gardening, J.C. Raulston, whose enthusiasm for new plants was proving infectious, was a leading influence in horticulture. It was through his writings that I discovered one of his many introductions, Euscaphis japonica, the Korean Sweetheart Tree, that is one of the jewels in my garden.

I was amazed at the variety of camellias we could grow here in the Triangle. Who imagined that I could actually grow gardenias in my garden? I never hopped on the azalea bandwagon, one that dominated the spring gardening scene in the 1990s, but I certainly spread camellias – sasanquas and japonicas – throughout my garden.

I live in Chapel Hill where, now, all garden plants seemingly should be deemed as native – and I find myself being a politically incorrect gardener in the midst of political gardening correctness. I also don’t garden to encourage pollinators although I would do nothing to discourage them. Now don’t get me wrong, I have loads of native plants and pollinators in my garden but – and this is a huge but – they aren’t the reasons I garden.

One constant theme in my gardening history is that I am intellectually interested in plants. In fact, I have long been accused of being a plant collector rather than a gardener, not always a compliment. I experiment a lot with different plants to see how they will cope in my garden although I can be ruthless if the occasion calls for it, tearing up a large planting simply because I no longer like it or have grown tired of it. Long ago in my gardening life, I became interested in ornamental grasses, plants I’d never thought much about previously. Grasses had a lot going for them: They required little maintenance, weren’t very thirsty and deer left them alone. I even learned how to pronounce Hakonechloa macra, a Japanese grass that prefers cooler weather than we can provide in the Triangle. I devoured Rick Darke’s books on ornamental grasses, lusting after those I couldn’t find.

Today I have few ornamental grasses in my garden.

Several things happened. I became concerned that some of my Miscanthus carried the potential of rampant seediness, some grasses developed irritating prickers that can be dangerous to dogs, I built a deer fence, and I discovered that a mono-plant garden was intrinsically boring.

With the protection of a fence, I could now pick and choose my plants, a lovely asset in this time of an overproduction of deer. And, of course, I began to choose plants, such as daylilies and roses, that deer considered delicious hors d’oeuvres. Intellectually the roses fascinated me with their long, detailed history.

I love the pollinators that inhabit my garden. My two large patches of ‘John Fanick’ typically are riddled with powdery mildew from the beginning of August on – but I haven’t gotten rid of it because the swallowtails love it. I just didn’t plant it because it attracted butterflies. Rather, I planted it for the flowers and lovely aroma it produced. The swallowtails were an added treat. I garden for flowers but I have a strict rule that flowers remain on the plant and do not belong in a vase in my house. I treasure my camellia blooms but have no wish to float them in water to grace my dining room table. I do not garden to provide cut flowers for the house.

Lastly, I garden because I have dear plant friends that return year after year. The ‘Peggy Martin’ rose makes a lovely statement in my garden and I live in fear that Rose Rosette Disease may claim her. The aforementioned Euscaphis japonica delights me with its red heart-shaped seed pods. I happily greet my favorite camellias year after year.

The daylilies I adore. ‘Kit’s Circus Wagon’ is a must in my yard as is ‘Holly Hill Hello’. I treasure my baby windmill palm that now hovers 20 feet high. The Bletillia orchids, after three years of notable indifference, are now producing spectacularly while Tony Avent’s Hosta introduction ‘Branching Out’ is happily living up to its name. There are so many personal reasons behind every garden. Clarifying to yourself why you garden will help to add definition and character to your garden. It’s just about knowing yourself – a life lesson well learned.

Addendum: A dear friend who farms in Maryland sent this advice for getting rid of Rosa multiflora and poison ivy: Tardon is much more effective on the stems of multi-flora rose than glyphosate. Easier to use too; it’s thick, turquoise, and comes in a bottle with a stopper top, ready to use. It also works better on poison ivy and on the dreaded English ivy.

I have had no experience with Tardon so before you use it, please research it and use all recommended protective measures.

Be the first to comment on "Why Do I Garden?"