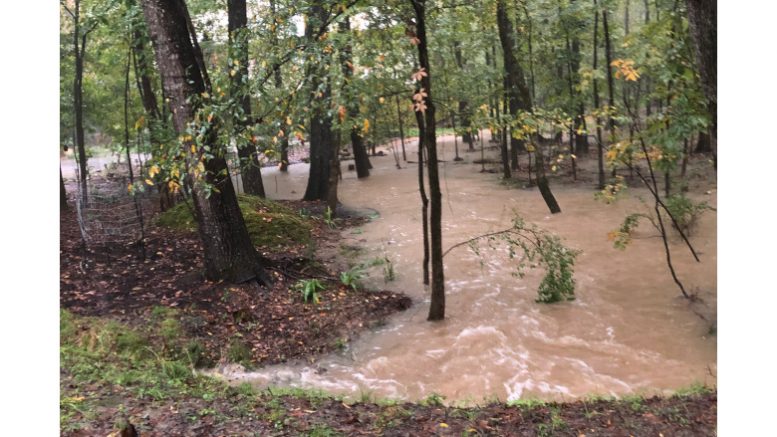 Trees drowning in stormwater at a home on Rainbow Drive in Carrboro following an October 2020 storm. Photo by Diana Newton.

Having lived in Chapel Hill and Carrboro for over 40 years, I’ve seen plenty of rainstorms that cause rapid, massive flooding to homes and yards, streets and parking lots. Eastgate Shopping Center can become a floodplain in a few hours. “I could kayak in my back yard because of the runoff from McDougle School every time there is a hard rain,” my Carrboro neighbor said recently. “My son’s pickup truck was lifted up and washed down the parking lot,” declared a concerned mother of a Camelot Apartments resident. On a sunny afternoon, a large hardwood next to a ditch that holds standing water suddenly uprooted and blocked my own street, fortunately without hitting anyone, but crushing the hood of my neighbor’s car. Neighborhood groups such as Friends of Bolin Creek and the Booker Creek Watershed Alliance have spent years advocating with Chapel Hill and Carrboro to make stormwater management decisions that protect the environment.

Yet many other people who stay high and dry on their property still shrug off such concern about stormwater impacts. In fact, Carrboro’s recently retired Town Manager, David Andrews, in 2021 emphatically decried against resident stormwater complaints, “But in the summer the water dries up and goes away!”

Yes, severe rainstorms come and go, but here’s a few good reasons why all of us are at risk — right now and over the long term, from the threats posed by stormwater:

Toxic pollutants in stormwater threaten public health: In towns like Carrboro and Chapel Hill, stormwater runs over the many impermeable surfaces, such as paved roads, parking lots, and driveways picking up surface pollutants such as oil, trash, fertilizers, pet waste and pesticides that wash into storm drains before flowing into our many nearby streams, lakes and rivers. Runoff can overwhelm local infrastructure and cause sewage overflows, which then carries pathogens that can end up in our drinking water supplies.

Impermeable surfaces mean more flooding: Impermeable surfaces increase the amount and speed of water entering our ephemeral streams, creeks, and lakes, which results in an increase in the severity and frequency of floods. Rainfall cannot soak into the ground through impervious surfaces so it does not replenish groundwater supplies. The Town of Carrboro is once again discussing using pavement to complete the Bolin Creek Greenway to accommodate a bicycling commuter path, despite the clear environmental damage, which would include not only tree cutting but also blasting. Damage to homes and property is costly: From Barred Owl Creek to Weatherhill Pointe, there are more neighborhoods in Carrboro that experience some stormwater flooding problems than not. Yet few have gotten effective help from the Town in addressing their issues. Case in point: Until the summer of 2021, the Town of Carrboro had never approached the homeowner’s association (HOA) of Quarterpath Trace during the 30 years since the development was constructed. In fact, residents who had experienced home flooding and previously asked the Town for assistance were provided no resources. Yet the HOA recently learned that the Town now holds it responsible for paying over $200,000 to refurbish dry pond stormwater control measures (SCMs) that 1) the residents had no knowledge of and so did not anticipate financial responsibility for their maintenance; and 2) were not constructed correctly in the first place. Further, the HOA hired a hydrologic engineer — the Town of Carrboro does not currently have one on staff — to evaluate the Town’s required plan and determined that it would be problematic and could actually cause flooding for homeowners near the dry ponds. Nevertheless, the Town is requiring compliance. When the HOA stated it did not have sufficient funds in reserve to support this sudden requirement, the staff Stormwater Specialist replied, “You better find some.”

Flood insurance requirements and rates change:   When localized flooding becomes chronic, homeowners may find themselves within FEMA-designated high risk flood zones and required to buy flood insurance. FEMA floodplain classification is limited to areas of at least one square mile, or half a square mile in some cases. That means that there are potentially many areas within Chapel Hill that are floodplains, even if they haven’t been identified by FEMA as such. According to New York-based First Street Foundation, nearly twice as many properties in the US face a high risk of flooding — a 1 percent chance in a given year — as FEMA predicts. Within the single block on my street in Carrboro, which has only four homes, two are considered low risk, while the other two are high risk. When a Carrboro neighbor bought her house in 1999, she was not required to have flood insurance. But because her home is so close to Toms Creek, she bought annual flood insurance at that time for $250. Upon refinancing her home in 2005, her property had been rezoned by FEMA and she was now required to purchase annual flood insurance for $2815.00 — a 1026% increase! Stormwater erodes soil around the roots, which can cause a tree’s root plate to become unstable. Trees can easily be pushed over or pulled from the ground by racing flood waters. In actively growing trees, the available oxygen in roots is used up within 1-3 hours following a flood. Oxygen deprivation causes roots to stop functioning or growing, and eventually results in root death. Loss of roots through direct flood damage or disease make the tree prone to drought the following growing season and to wind during our frequent summer thunderstorms. Take a walk around the path in Carrboro’s MLK, Jr. Park, which surrounds a designated wetland, and you will see nineteen young, newly planted hardwood trees that are dead. Thousands of your tax dollars have been wasted because they were improperly planted and drowned in the stormwater that ponds around the perimeter for long periods after hard rains.

While there are many variables when it comes to how different species of trees respond to flooding, broadleaved trees tend to tolerate flooding better than conifers. And our area has plenty of pines!

Some stormwater plans are based on clearing large swaths of trees. For example, a recent plan to create stormwater retention basins along Chapel Hill’s Booker Creek included the proposed removal of about 50 acres of trees along the upper and lower sections of the creek. These basins, recommended by an engineering firm the Town hired to find ways to reduce flooding, have been controversial among area residents, due to their environmental, aesthetic and financial impacts. But the Booker Creek Working group has been able to move forward with a tentative recommendation for water management plans based on decentralized green stormwater infrastructure (GSI).

Our climate emergency accelerates: As global warming continues to exacerbate sea level rise and extreme weather, our floodplains are expected to grow by approximately 45 percent by century’s end, according to the Natural Resources Defense Council. The Town’s current use of the 100-year flood standard will become vastly more inaccurate at predicting flooding events. Aging grey infrastructure such as culverts will be incapable of safely managing the volume and will fail. Green infrastructure — rain barrels and ponds, tree plantings, permeable pavement, and stream restorations — is a must that we need to further invest in as citizens and as town governments to repair the present inadequacies and prepare for the wet future that is barreling towards us like a tsunami.

Addressing these problems now will not be cheap, but postponing action until the problem worsens will be even more costly. Ditches and culverts on Dove Street in Carrboro were no match for stormwater on May 23, 2021. Photo by Diana Newton.