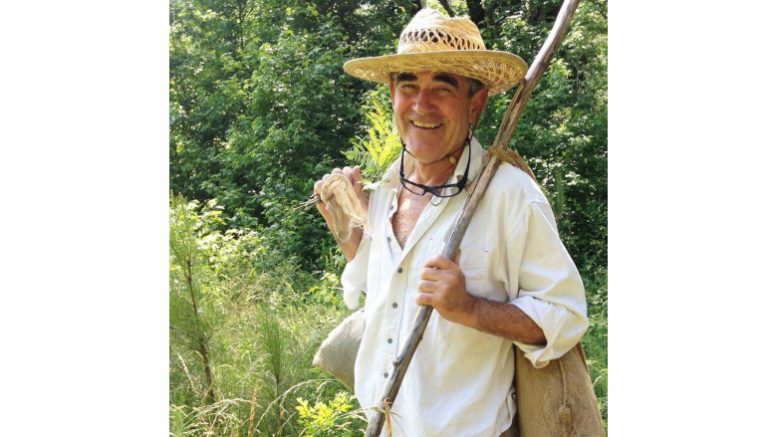 Will Endres. Photo courtesy of www.carrborofarmersmarket.com.

William S. “Will” Endres, Jr was an acclaimed and beloved herbalist, wildcrafter, and outdoor educator who spent the latter part of his life in Hillsborough, NC, and had a wide range of influence in the local community through vending herbal health products at the Carrboro and Durham Farmers’ Markets, benefitting and educating many laypeople, as well as all who studied herbalism with him.

He was born in 1945 in Savannah, GA, and died in January of this year. His family moved to the Charleston, WV area when he was one-year-old. He says of his growing up in central West Virginia, “I was lucky enough to grow up in a place where we had apple orchards and woods and edges of fields…and my neighbors knew the names of these plants, trees and shrubs and they all had something to say about it on some visceral level…”

He was fascinated by plants from an early age: “I remember my mom dropping me off at the library when I was little. I’d just hang out in that nature section.” He recounted this experience in a 2016 interview on HerbMentor Radio and went on to say that nature and the outdoors were a comfort to him while growing up.

Lindsay Perry, proprietor of Durham-based Full Flower Herbs, took one of Endres’s 8-week classes. “Will was an eccentric iconoclast,” she said, and in his interview with Herbmentor Radio Endres noted that, as a child, instead of doing “normal things like basketball or hanging out,” he spent most of his time in the woods.

Endres’s many interests and passions extended beyond herbs and wildcrafting, however. John Soehner, a vendor at Carrboro Farmers’ Market recalled, “Me and Will always talked about one thing and one thing only and that was boats! He loved the Florida Keys!” Others who knew Endres noted that he loved kayaking too, particularly sea kayaking.

Mark Oglesby, who worked with Endres, noted that Endres was also a percussionist who crafted drums and performed with the American Dance Festival.

Around age 17, Endres hitchhiked across the country and later became a serious documentary photographer in San Francisco. He was a member of a group, Mountain Photography Workshop, that published Appalachia: A Self-Portrait in 1979 and went on to win a National Endowment for the Arts grant to document Appalachian areas of Kentucky and West Virginia. Portions of his work are archived at the Smithsonian American Art Museum. Endres’s primary teacher — C.F. “Catfish” Gray — is featured in the same book.

After some years on the West Coast, Endres felt called to return home. He worked as an electrical contractor but was unhappy at it and his childhood asthma returned.

He hit the road once more in a Volkswagen bus and finally did return to West Virginia. It was then that he dove deeply into plant medicine, a journey he’d begun as a child and remained connected to his whole life.

During this period, Endres met “Catfish” Gray and stayed with him for a “few decades… he encouraged me, taught me my trade, what plants are, how to use ‘em, how to dry ‘em, how to make medicine out of ‘em, how to relate to people.” Endres noted that Gray, in addition to teaching about medicinal plants, helped Endres spiritually and was a father figure to him.

Oglesby emphasized that Endres wasn’t just an herbalist. He had a real connection with gathering plants, roots, leaves, flowers, identifying each one, digging up and collecting them, and then cleaning, drying, and processing each to bring medicine to people.

According to both Ogelsby and Perry, Endres’s knowledge of nature was unparalleled. “Any plant you could point out in the forest, and he would tell you what it was,” Perry said. “Maybe [tell you] something you could do with it…he knew every plant!” Photo taken by Will Endres of his mentor C.F. “Catfish” Gray gathering wild medicinal plants in Appalachia in the 1980s. Photo courtesy of www.americanart.si.edu.

Endres also had a knack for finding amazing spots for harvesting and camping and would travel to West Virginia to collect what didn’t grow in North Carolina.

Perry recalled one such gathering trip: “I couldn’t see the calamus [plant] when we got to the field,” she said. “Turned out it was just a solid mat of calamus — it’s called ‘sweet flag’ and these little flags of the leaves were sticking up out of the field.”

Endres sold products in area farmers’ markets under the name Will’s Wild Herbs. His spray for poison ivy, cedar incense, and elderberry juice were some of his most popular items. Endres also had a talent for creating community. For example, he procured cedar sawdust from local woodworker Louis Graham to make incense and took students to Perry-winkle Farm to collect yellow dock and echinacea.

“He had a particular materia medica,” Perry said, using the Latin term for knowledge of the healing properties of remedial substances. “He loved ‘heroic’ herbs as opposed to simple tonic herbs that work more slowly. He liked the really powerful ones. I remember his favorites being sassafras, calamus, ginseng, goldenseal, yellow dock, black cohosh, and cedar.”

Claire Narensky, proprietor of Four Flowers Botanical Medicine, apprenticed with Endres and mentioned that animals were family to him. Endres had a dog named Dove and a cat called Stella and his knowledge of herbal medicine extended to animals.

Narensky related the story of how she first met Endres at the Carrboro market long ago. She had a dog at the time that was sick but not suffering. Endres gave her a free bag of cedar incense to create a positive atmosphere at home for the dog and advised just letting the dog be. He also called to see how the dog was, though they’d only met briefly. He showed interest and compassion, Narensky said.

Narensky also described Endres as a steward of the land who emphasized sustainably harvesting herbal medicines. She recalled an occasion when the two of them went to collect goldenrod and it hadn’t bloomed yet. “Nature isn’t a grocery store!” Endres said.

Endres is remembered fondly by those who knew him as someone who lived and shared to help people embrace nature and understand their connection to the natural world.

“One of my major joys in life is bringing people out into nature, helping them feel comfortable and at ease,” Endres said in a 2013 interview. “My goal is to be a spokesman for these plants and a good ambassador.”