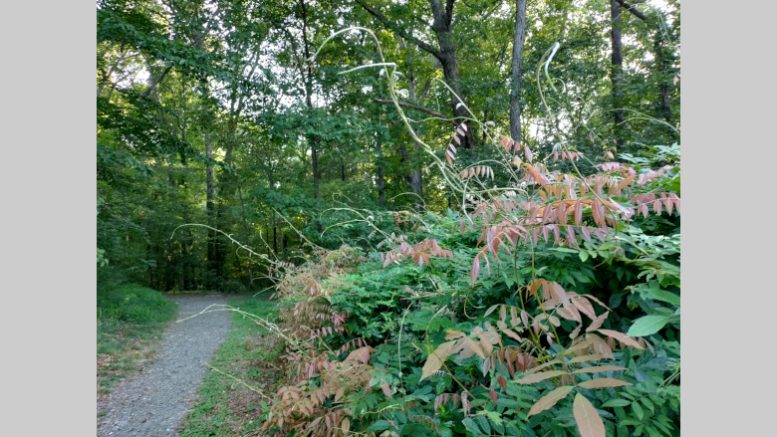 Now is the best time to remove invasive wisteria from your yard and nearby public green spaces. The clusters of lavender flowers are hard to miss, and once in hand, a quick study of the distinctive leaves and vines makes it easy to find even without the blooms.

Wisteria control is not just some feel-good exercise in a nod to Earth Day; it is practical protection for residents of this area: Last winter a large tree on private property, strangled by wisteria, fell across a residential road close to the UNC campus. It tore down overhead lines and blocked a long, dead-end street. Residents were without power, heat and Internet access and could not leave the subdivision for almost a whole day.

Cutting off as many vines as possible at ground level also has maximum effect this time of year. That is because nutrients stored over winter in the vast root system have been sent up into the vines and new shoots. Removing them now deprives the invaders of that sustenance, and prevents the leaves from returning energy to the root system once they are fully formed.

Invasive wisteria is a “severe threat,” according to the North Carolina Native Plant Society. It grows fast and has no natural controls. As a result, wisteria is not just taking over wooded areas, it is actively killing trees. Within just a few seasons vines will start to smother a tree, blocking sun and stealing water and nutrients. In particularly malevolent cases, a powerful vine will coil tightly up the trunk, cutting into the bark and killing the tree.

This is not just an ecological threat. As noted above, there have been numerous instances of weakened or dead trees falling and blocking roads and paths or tearing down power lines, causing blackouts and creating electrocution hazards to people and animals. Removal of fallen trees is complex and expensive.

The specific invasives are Chinese wisteria (W. sinensis), and Japanese wisteria (W. floribunda), but that is a distinction without a difference. A 2007 study of the invasives spreading around Charleston, South Carolina and Tallahassee, Florida found that 82% of the vines in those areas were hybrids of the two Asian species. Pretty but Pernicious: the lovely lavender cascades of the Asian species of wisteria bloom before the leaves are full size, making for a more dramatic display. That is why gardeners began to import the vines a century ago. They have been wreaking havoc on native trees and shrubs ever since. Photo by Gregory Morris.

There is also an indigenous species, (W. frutescens). All are woody vines that climb quickly and bear large fragrant bunches of lavender flowers. Since the middle 1800s, gardeners in the U.S. have favored the Asian varieties because the flowers bloom before the leaves sprout, making for a more dramatic display.

In fits and starts over the last few years, and with growing urgency this year, homeowners have been collaborating to remove wisteria from their yards and from surrounding public spaces, especially along Battle and Bolin creeks in Chapel Hill. Community volunteers have accelerated their efforts to remove wisteria, because nothing else will (see guide, below). Back from the Dead: Community volunteers cut all the wisteria choking this tree last summer; the dead tangle is clearly visible. Yet in just the first few weeks of spring the vine stumps around the base of the tree have sent up tendrils that are already several feet high. If left uncut, within a week or two they will reach into the dead tangle and twine high back into the tree. Photo by Gregory Morris.

“Rarely have I seen any herbivory on it,” said Johnny Randall, director of conservation at the North Carolina Botanical Garden in Chapel Hill. “That is one of the main reasons that invasives are such a problem. We see that over and over. Not even the deer eat them. There does not seem to be any significant level of predation by mammals, insects or pathogens.”

That is, in part, because wisteria is toxic. According to National Capital Poison Control, “wisteria seed pods and seeds are considered the most toxic parts of the plant, but all parts contain the harmful chemicals lectin and wisterin, which can cause a burning sensation in the mouth, stomach pain, vomiting and diarrhea if swallowed. These symptoms can last for up to two days.” Waiting for Wildflowers: Several yards by the side of this trail in along the Battle Branch greenway have been cleared of wisteria shrubs by community volunteers. Native wildflowers that are attractive to bees are being planted. Photo by Gregory Morris.

Another diabolical aspect of wisteria is its quick reaction to being attacked. To the despair of volunteers who have dedicated long and sweaty weekends to whacking the wicked weed, cutting the big trunk vines as is recommended stimulates the root system to sprout elsewhere. Like a real-life horror-movie monster, wisteria won’t stay dead.

Randall explained that “root sprouting if the main vine is cut is a common phenomenon in plants. The growth regulators in the plant respond to the damage by saying, in effect, ‘let’s get growing!’”

The root system is really the heart of most plants. What humans see above ground — the majestic trunk and crown of a tree, the sprawl of wisteria vines and leaves or a little mushroom — is mostly just the plants’ organs for making food or reproducing.

Wisteria does both prodigiously. “Once it establishes a fecundating root system, wisteria can really take off,” said Randall. “There is momentum in the rate of growth. Wisteria mostly relies on vegetative propagation, either stems running along the surface, called stolons or runners, or just under the surface, called rhizomes.” Wisteria seeds occur in hanging pods. They are disks about half an inch in diameter, looking a bit like dull pennies or flattish coffee beans. They are too big to be spread by the wind, but travel well down water courses. That explains how the vines get established along creeks, growing low and shrubby for years unnoticed until that tipping point is reached. Then the runners and rhizomes invade nearby woods and gardens.

The North Carolina Botanical Garden is trying to reverse that process in its nature preserves. “When I see how much work it is to remove wisteria, I lament over how people think it’s so pretty,” Randall said. “Yes, but it’s not worth the pain. People like the flowers, but the week or two of pretty flowers is not worth the hell it causes the rest of the year.”

That hell looks like “a wall of wisteria, a wisteria desert,” said Sarah McGill, a physician and volunteer organizer in Chapel Hill. Her Road-to-Damascus moment was “several years ago I noticed some vines coming into my yard and wrapping around the trees. One vine was already bending one of the small trees, starting to kill it. The vines were running along the ground, splitting, sending up shoots, and diving back into the ground. Then I saw that the Battle Trail was covered in wisteria, it was hard to see anything else.” Beautiful but Brazen: These wisteria vines, in full flower, are hanging from power lines on private property. While not heavy enough on their own to pull down the lines, a storm with high winds or thick ice makes that likely. Photo by Gregory Morris.

McGill got her family to help, “but we realized we needed to mobilize our neighbors, even the whole community,” she said. “Homeowners put in this stuff because it looks nice, not knowing how harmful it is. It seems pretty for a little while, but the trees are dying. After the trees are gone it will just be a wisteria desert.”

The North Carolina Forest Service agrees. In an advisory ‘leaflet’ for the public it states frankly: “As enticing as it is to plant exotic wisteria, it would be best for the environment if these plants were removed from commercial trade altogether. Our native W. frutescens is every bit as stunning in the spring with no detrimental environmental effects. Unfortunately, to date it has been much more difficult to find in commercial trade.”

An infestation of any appreciable size will usually require a combination of cut stump and foliar herbicide treatments, the Forest Service states. “Where vines have grown into the tree canopy, cut each stem as close to the ground as possible, cut again a little higher up and remove the cut pieces. Treat the freshly cut surface of the rooted stem with a 50% solution of triclopyr.

“Groundcovers of exotic wisteria can be treated with a foliar solution of 2% triclopyr plus a 0.5% non-ionic surfactant to thoroughly wet all of the leaves. Exotic wisteria is best treated from the spring to fall when air temperatures are above 65 degrees Fahrenheit. Repeated treatments will likely be necessary for complete control,” the Forest Service recommends.

The North Carolina Department of Agriculture and Consumer Services (NCDA&CS) has adopted the federal Noxious Weed list, but “wisteria is not listed due to its wide distribution in the U.S.” said Phil Wilson, director of the Plant Industry Division of NCDA&CS. “Regulatory measures would not be effective. With such wide distribution, the education of the public about the invasive qualities of the pest is important to help them with control measures and the eradication on their properties.” Too Late for this Tree: The wisteria besetting this loblolly pine was cut last summer, but the tree had already been so weakened that it fell in a winter storm. If it had fallen in a different direction, it could have knocked down power lines causing a blackout and possibly a fire. The tangle of dead vines can clearly be seen on the ground and caught in the branches of other trees. Photo by Gregory Morris. Failure to cut an air gap: the large wisteria vine at left was cut at ground level a month ago and is dead, but new vines already drape it heavily as they clamber back into the tree. Photo by Gregory Morris. Be the first to comment on "Pulling Down the Purple Reign"