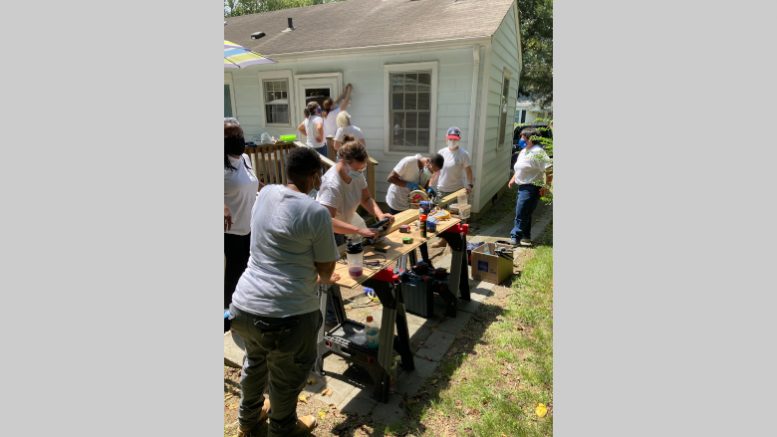 Women, working on a house in Carrboro, learn construction skills to land good-paying jobs in an in-demand field. Contributed photo.

It’s not a secret: In the construction trade, practically a whole gender is missing. Women make up only 1.5 percent of the entire U.S. construction workforce, according to the National Association of Women in Construction.

This statistic did not go unnoticed by Nora Spencer, the founder and CEO of Hope Renovations, a nonprofit organization that equips women with the resources and skills to work in construction. While she was getting her master’s in social work at UNC-Chapel Hill, she had the idea to start a training program for the trade.

“I became really closely acquainted with the lack of living-wage jobs for women and the fact that women are the primary low-wage earners in North Carolina,” she said. “I realized that the trades were a great place for women because they pay living wages. There’s a lot of opportunity right now.”

Hope Renovations is the first nonprofit in North Carolina to offer a women-specific trades training program. The organization also has its own all-female construction team that completes renovation and repair projects for elderly adults and adults with disabilities in the community. But why are there so few women in construction? Spencer said this is partially due to the patriarchal history of the profession.

“Construction has just been for men since it started,” she said. “Women and other underrepresented groups just have not had a seat at the table since the very beginning.”

Spencer said the industry needs to start opening up opportunities to minority individuals and strategically recruiting them to the field.

Hope Renovations’ main source of funding comes from a federal program called the Workforce Innovation Opportunity Act, but this program is for innovation, not gender equality. Spencer said that there is not enough government support for women in the trades to keep up with the demand.

Angela Cacace is all too familiar with these obstacles. As a carpenter and designer, she started her own remodel company called A.Marie Design Build, but she did not stop there.

Like Spencer, Cacace wanted to help other women break into the construction business, so she started a trending hashtag called #MoveOverBob in 2017. Since then, over 5,000 posts have used this hashtag, featuring women working on construction and home renovation projects. She created an Instagram account shortly after this that has almost 5,000 followers.

“‘Move Over Bob’ doesn’t mean ‘Kill Bob,’ ” she said. “It just means make some room, so kind of embracing the fact that we’re really just trying to work with men and work together to accomplish great things.” Cacace launched MoveOverBob.com in August 2020, a website that compiles resources, news updates and editorial features meant to inspire and help women in construction.

“Trying to find the information that you need to figure out where you fit into the industry is an obstacle on its own,” she said. “Getting exposure to kind of a general understanding of what is available to you is also kind of difficult to get ahold of.”

She also said that women in construction are constantly fighting an uphill battle of proving their worth within an industry that does not traditionally include people that look like them.

“There’s just so many opportunities and it feels like it’s this best-kept secret, but a lot of women when you talk to them when they’re in the industry, they just want more women to know about it,” she said. “I think that’s why we’re so enthusiastic when anyone wants to talk about construction because more women should do it.”

Cacace hopes Move Over Bob can offer a source of inspiration and resources for women looking to break into construction, a career she thinks could benefit from the inclusion of more women.

What changes in store for local police?

Be the first to comment on "Women Build a Future"