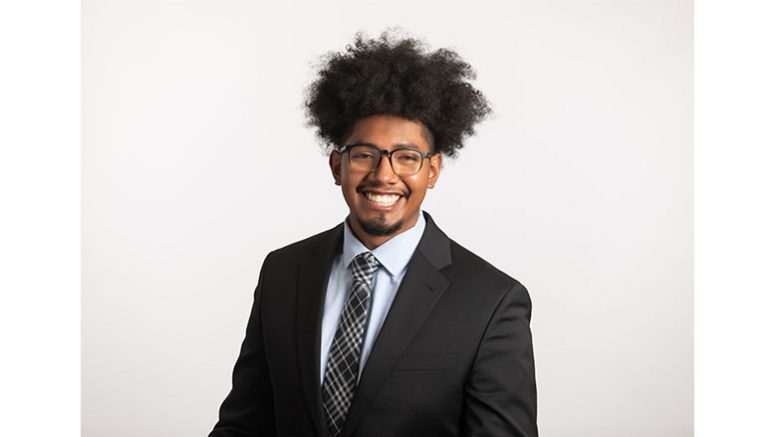 North Carolina Center for the Advancement of Teaching/Terri Clark Photography.

With news feeds full of the unfolding drama of Russia invading Ukraine, Xavier Adams works the nascent war into the curriculum of the history course he teaches at Orange County High School. Getting students to care about wars that happened on far away continents centuries ago can be challenging to even experienced teachers. Adams, in the second semester of his second year as an educator, finds inviting discussion of current events helps contextualize the power grabs and kingdom clashes that happened in ages past and makes them more relevant to students today.

“I like students to understand how stuff that happened 200 or 300 years ago is stuff that still happens today,” Adams said. “It looks different and is happening in different ways, but there’s a reason why we need to learn about history.”

Adams’ ability to ignite interest among teenagers in learning the lessons of long-ago leaders to understand how contemporary leaders can make better decisions is only one of the reasons the N.C. Center for the Advancement of Teaching selected him as the 2021 Prudential N.C. Beginning Teacher of the Year.

“The award speaks to the skills Mr. Adams brings to the table, his innovation and how he inspires children to succeed,” Felder said. “The work we do is not an island. His award also speaks to the support he’s received from the district and his school and the opportunities for professional development to shape him into the teacher he’s becoming.”

A Kansas City native and ardent Jay Hawks fan, Adams went to Baylor University in Waco, Texas, where he majored in religion and minored in Spanish with the goal of becoming a youth pastor. During his first semester in college, he began working with middle school and high school students and continued that work throughout his undergraduate years. After graduating in 2016, he signed on with a nonprofit that ran an afterschool program for teens of color. He led the teens in outdoor activities and arts and theater experiences to supplement what they learned in school.

In 2017, Adams moved to Durham to enroll in Duke Divinity School. Partway through his master’s in theological studies, he shifted his focus from ministry to working with young people in a nonprofit setting.

Some impacts are small and some are big, he said, but it’s cumulative over time.

“Being a teacher, you’re embedded into the daily rhythm of students’ lives,” he said. “That offers consistency that creates deeper and broader trust between teacher and students.”

Adams completed his MTS and continued at Duke for a master’s in teaching. He graduated into a pandemic and was hired by Orange County Schools, where he began teaching remotely, which required a new skillset. He learned to juggle online and in-person teaching when the school opted for a hybrid instruction model in spring of 2021. When classes resumed fully in person in the fall of 2021, he had to tap into yet another skillset. So even though he is wrapping up his second year as a teacher, he still feels like a novice.

And yet he has no regrets about his career choice.

“Not every moment of every day is awesome or magical or transformative, but I’m very grateful I’m a teacher,” he said. “I wouldn’t change it for anything right now.”

The connections he’s made with students and the trust they’ve put in him keep him going. He has celebrated with several seniors who have been admitted into the college of their dreams. He feels honored when former students stop by his classroom and check in with him to share their victories and hardships.

“I see students grow and become who they want to be,” he said. “That’s super exciting.”

Teaching is rewarding but complex, Superintendent Felder said. Teachers must build a relationship with each student and tailor instruction to that particular student’s needs. The pandemic added yet another challenge.

“Competition for teachers is steep,” Felder said. “The game has changed, and it’s not as easy to attract teachers to the profession. People have options they didn’t have before COVID.

“Mr. Adams’ winning the award shines the spotlight on why people go into teaching. …  His is a well-earned honor. It will help with recruiting.”

Adams received the award Feb. 17 at a ceremony at Western Carolina University in Cullowhee after a months-long evaluation process. In August, he learned he had been nominated for Beginning Teacher of the Year at the district level. (“I want to find out who nominated me so I can thank them,” he said.) At that stage, he was asked to submit paperwork, including his resume, some letters of recommendation and his answers to short essay prompts about why he chose a career in teaching. A panel of judges interviewed him and others in the school familiar with his teaching, and judges observed him as he taught class.

In early October, he learned he had won at the district level and would move on to the regional level. The nine regions in the state each produced three regional winners, and they competed for the state title. The contestants were each interviewed three separate times before a state winner was declared.

As the winner, Adams received $5,000 and his school received $250 for supplies. He also will be treated to a two-week N.C. Go Global trip to Australia with other educators in the summer of 2023. Felder said the entire Orange County Schools system will benefit from what he learns in that excursion.

Orange County School Board member Bonnie Hauser was pleased with the outcome.

“Mr. Adams is an extraordinary professional, who combines academic excellence with a deep passion for student growth,” she said. “His impact extends beyond the classroom, including to our board. It’s thrilling to witness.”

Be the first to comment on "Xavier Adams, N.C. Beginning Teacher of the Year"