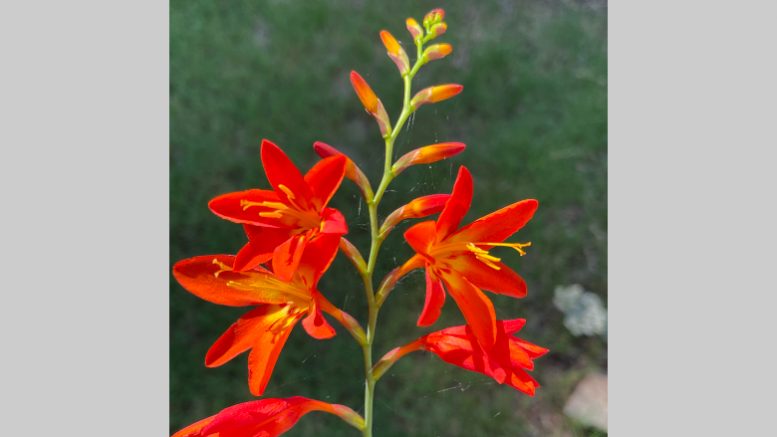 Crocosmia is a strong member of your garden’s cast. Photo: Lise Jenkins.

When I first began to garden, I was only interested in those plants that made a big statement, plants such as roses, daylilies and lilies. As my garden has filled up, however, I increasingly have become fixated on plants that I call “the supporting cast” — plants that complement the “stars.”

The cast member I’m concentrating on right now is crocosmia. I long avoided crocosmia because I thought it only came in shades of orange, a color that does not work in my garden. When a dear friend offered me some of hers that she swore were red, I thought, “Why not?” — and planted the corms, thereupon forgetting about them. That first summer, the upright sheaths produced few flowers, so few that I didn’t form much of an opinion about them.

This summer, my attitude has been one of enchantment. I unknowingly — or unthinkingly — planted a lovely red daylily with a yellow throat in front of the crocosmia. The sheaths rose around the daylily and suddenly sprouted small, red flowers. Finally, I had a star surrounded by her supporting cast in the garden — something totally unplanned.

Since then, I have learned a bit more about this South African native. If you can give them a sunny place with well-draining soil, crocosmias will reward you by returning year after year.

Crocosmias are unappetizing to wildlife and aren’t poisonous so you can plant them around your pets. There are different varieties available, ranging from red to yellow on the color wheel. The most popular and the easiest to find is the red ‘Lucifer’ that was hybridized in 1960.

Plant the corms, pointed end up, 3 inches under the soil’s surface. During the first year, you will get some leaf sheaths and probably nothing else, as these corms typically don’t produce blooms their first year. In late autumn, cover the corms with heavy pine bark mulch to enable them to survive the winter.

If you insist upon instant gratification, plant some annuals near the area while you’re patiently waiting for the flowers to burst forth during their second growing season.

Crocosmias can be hard to find. The Lily Garden (www.thelilygarden.com) has an interesting assortment, many of which are the hybridization results of Niels van Noort. Brent and Becky’s Bulbs (www.brentandbeckysbulbs.com) also carries four varieties.

Try them, and you might find that crocosmias fit into your garden as beautifully as they did in mine. After all, a star can never have too many in attendance.

Be the first to comment on "Your Garden’s Supporting Cast"