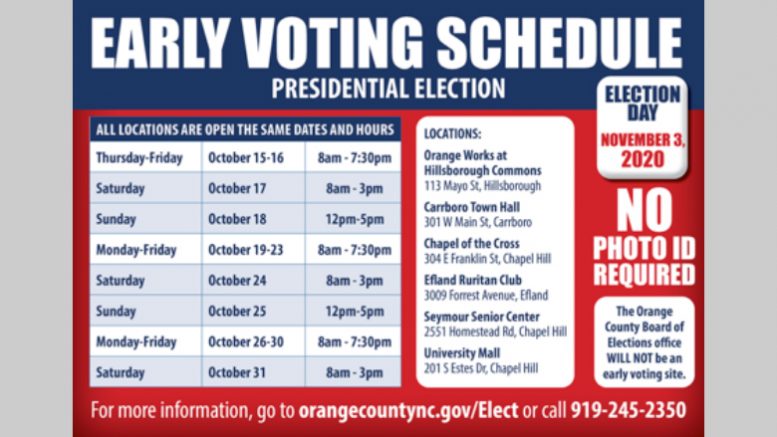 It’s finally time for early voting — but many local voters already have cast their ballots even earlier.

Orange County’s early voting period begins Oct. 15 and lasts until Oct. 31. Registered voters can cast ballots at any of the county’s six early voting sites: Orange Works at Hillsborough Commons, Carrboro Town Hall, Chapel of the Cross, the Efland Ruritan Club, Seymour Senior Center and University Mall. The sites are open from 8 a.m. to 7:30 p.m. on weekdays, 8 a.m. to 3 p.m. on Saturdays and 12 p.m. to 5 p.m. on Sundays.

But although voters can cast ballots in person, Jamie Cox, the chair of the Orange County Board of Elections, said he has already seen a dramatic increase in requests for mail-in absentee ballots. About 30 percent of the county’s nearly 120,000 registered voters have requested mail-in absentee ballots — the largest percentage in the state. And about 14,000 ballots have been returned so far this year.

Cox said he attributes this to the county’s consistently active and engaged electorate. In a typical year, he said, only four percent of the county’s registered voters make requests for absentee ballots.

Increased requests reflect concerns about contracting COVID-19 while waiting in line at the polls, Cox said. To promote safe social distancing, the OC BOE has moved voting sites into larger rooms or used larger portions of the same facilities. The OC BOE’s office, which is typically a one-stop early voting site, will instead be a command center for mail-in absentee ballots.

Cox said he had anticipated a shortage of poll workers, but the North Carolina State Board of Elections undertook an effective poll-worker recruitment campaign. Some counties are short on poll workers, but Orange County has a waiting list.

Rachel Raper, director of the OC BOE, said the board typically employs a little more than 200 Election Day workers. This year, that number has increased to more than 300. Every precinct will have line monitors, greeters and two safety guides who clean surfaces after each voter finishes. Cox said they have also reconfigured voting enclosures to ensure one-way traffic.

Voters are not required to wear masks, although poll workers will have them on hand to offer.

“If they decline that offer, then they go vote. And again, they’ll be cleaned behind after every step of the process,” Raper said. “I think it’s very important to note in both the governor’s executive order and also Orange County’s State of Emergency there are exceptions to wearing a mask and quite a few exceptions. And also, the State Board of Elections has said the right to vote is constitutionally protected. We cannot add requirements to voting, such as wearing a mask.”

The OC BOE is also forgoing “I Voted” stickers since it is not possible to keep them clean.

“Instead we are giving voters a pen to fill out their ballot, and then they get to keep it,” Cox said. “And the pen actually says ‘I Voted’ on it, which is cool. So that accomplishes two things. It of course gives voters something to take with them to say they voted, but it also allows us to not have re-use of pens, which of course is promoting better hygiene.

All early voting and Election Day sites allow curbside voting to comply with the Americans with Disabilities Act, which allows elderly and infirm voters to cast ballots from their cars. Curbside voters can vote on their own or be assisted by a person of their choice.

Cox said he has heard anecdotally that an increased number of voters may ask to cast ballots curbside due to COVID-19, and they have received some guidance from the NCSBE. Anyone who votes curbside must fill out on affidavit demonstrating they fit the requirements needed to do so.

Same-day voter registration is also available at all early voting sites. Anyone completing same-day Registration must bring a valid form of government ID that shows residence in Orange County. This does not have to be a photographic ID. They must also vote during early voting, rather than on Election Day. Cox said changes have also been made to regular voting sites, some of which occurred before the COVID-19 pandemic. The OC BOE redesigned precincts to better follow neighborhood boundaries and consolidate larger precincts around UNC-Chapel Hill’s campus.

If you vote on Election Day, you must vote at your designated precinct, which you can find on the NCSBE’s website by providing your name and address. Cox said he encourages people to look at the OC BOE’s website, which has detailed explanations of how to vote early and mail in absentee ballots.

“We have taken, as the Board of Elections, every precaution that we can and made additional investments in our polling places and staff to make sure that if folks choose to vote in person that they can do so safely. So really I’d encourage — one, everybody to make a voting plan; two, research their options and if they have any questions; three, they can call us. We have a very helpful staff. We’re fielding a ton of calls and are happy to do so.”