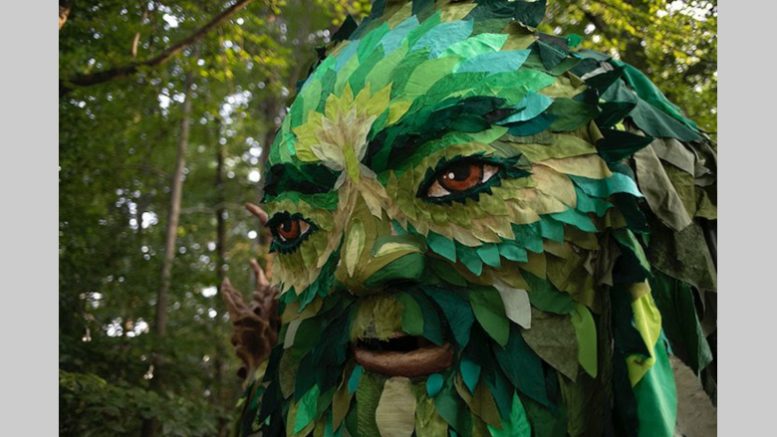 The premise is simple but profound: a group of artists decide to save the world, so they move to Chapel Hill. What better place from which to save us all? People move here all the time in the hope that their actions might lead to a better world; but saving it? This is new. And delightful. And so crazy it just might work.

So when a film titled “We Are Here” was produced a few months back about Paperhand Puppet Intervention and the announcement heralded the film as being about a group of artists who want to save the world, nobody in the immediate area thought that was odd in the least. It’s a concept that fits right in with who we are: a community of people who host book readings to raise awareness of disease, who auction art to raise money for the Haitian people after an earthquake, who pack dance-a-thons to benefit those who need a home.

Why not produce a puppet documentary to help save the world?

Paperhand Puppet’s co-founder Donovan Zimmerman explains. “The “intervention” in our name is about snapping people out of the non-feeling, non-mindfulness that most people go through the day with,” he says. The company of performers does just that, and they’re coming to a screen near you.

The group’s annual output has long hinged on a single show each summer, traditionally opening in August at Chapel Hill’s Forest Theatre before closing the following month at Raleigh’s North Carolina Museum of Art. The 2021 show is now open. This is the year to support Paperhand and be inspired. For Paperhand’s new show, “Unfolding Seeds: Invocations of Transformation,” Donovan Zimmerman knew their art form could speak eloquently to this era of worldwide loss and brokenness, not just from the pandemic but other social and political stressors.

And now there’s a book. David Perry, Carrboro, served as a contributing editor on the book.

Paperhand Puppet: Interventions in Cardboard, Cloth, and Clay, a 256-page, coffee-table tome available in hardback and softcover. Throughout the book, a cascade of vivid full-page images and illustrations feature an astonishing collection of larger-than-life mythic, iconic, and archetypal figures drawn from indigenous folk tales across the globe. Dragons and phoenixes fly across its pages. David Perry, UNC Press’s long-time editor-in-chief, also worked on the project.

The book appears just as “We Are Here” is screening in local venues. The film is produced by Marc Levy, who spent over a decade in Los Angeles, and who now lives in Chapel Hill, NC, where, as he says, “the trees are green and the air is clean.”

Marc is an accomplished cinematographer having shot documentaries, commercials, and features all over the world. He’s been a part of an Emmy-nominated series for NFL Network called “Undrafted”​, sports and culture documentaries for Red Bull, ESPN 30 for 30, and well as commercial projects for Dell, Subaru, Intel, and The Honest Company.

“I was raised in New Orleans with ties to North Carolina,” he says. “After moving to Chapel Hill, where I have some family, I felt this need to turn my camera on people who are committed to changing the world through their art. I hope people will see it.”

When seen live, the extraordinary magic created by the Paperhand Puppets Intervention is an experience that the viewer is not likely ever to forget. The giant and majestic puppets have the power, through the power of storytelling, to change us, one person at a time. That’s the goal of all art, and of all the artists – painters, writers, filmmakers, photographers – who have come to this creative outpost in the middle of North Carolina to live and work. If we can save one person, one person at a time, that’s success. But imagine if we could save all of mankind: that would be a miracle.

“We Are Here” will show at Varsity Theater on September 9th at 7 pm. http://www.varsityonfranklin.com

The House at Gatewood

Be the first to comment on "You’ve Seen the Play. Now Watch the Movie and Buy the Book."