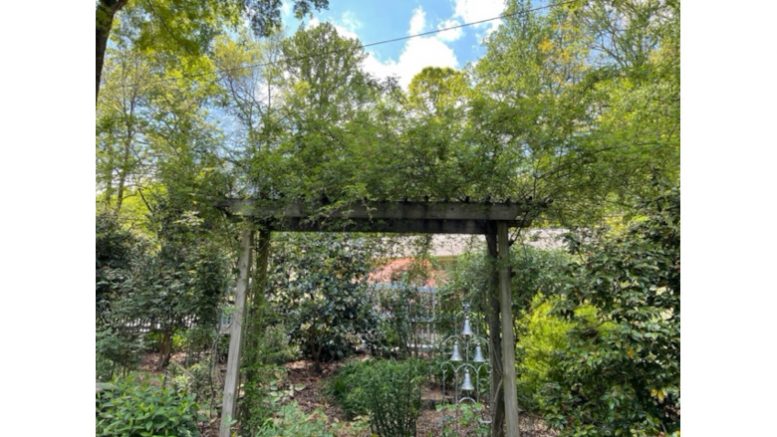 I have two dogs, one named Patience and the other Prudence. Now, I have always had a fondness for old-fashioned names (ones that I failed to inflict upon my children) but the main reason they bear these names is to point out the virtues I lack – and both are required if one is to become a good gardener.

Patience is necessary because as soon as I plop a Baptisia into the ground, I want it to do something, anything rather than hang around for an interminable amount of time just looking rather silly. You see, Baptisias really don’t do anything until they have determined their taproots are deep enough. I have read that some taproots extend to a depth of 12 feet although I have no idea if that’s an old-wives’ tale. Suffice it to say that Baptisia takes its time to live up to its full potential above ground.

Four years ago, I planted a rose, ‘Madame Anisette’ that grew and grew without producing even one bloom. When I Googled her name, I discovered that this was common behavior for this rose. Disgruntled, I decided to give her more time, remembering that I needed patience. The next year she graced me with three spectacular blooms – but surely you will agree with me that this is scant reward for such a long wait. The following year I saw five blooms and even though she’s classified as a reblooming rose, that was the sum total.

This year, figuring I would no longer be around if I waited for the lady to produce an adequate number of flowers, she was removed from the property, guillotined I like to imagine. You see, I had lost patience.

My Lady Banks rose, spectacular last year, did not bloom this year. Searching for answers, I learned that she only blooms on old wood so I thought perhaps the slight trim we had given her had ruffled her feathers. Then I remembered that sudden hard frost we had received at the end of March and am confident that the frost hit the lady at the wrong time, just as she was putting out buds.

Lady Banks is considered on the iffy side here in the Triangle, probably for this reason – she’s an early bloomer and we can get late hard frosts in March. Even without blooms she is lovely and I will patiently wait until next spring with my fingers crossed that she will again be able to flower. Patience is the key here.

Prudence is also necessary. My garden is full. I know my garden is full, yet, I somehow need that Itoh peony I read about. Last year it was impossible to find that old standby Echinacea cultivar, ‘Pica Bella’. She’s been around for many years but growers were introducing other, newer varieties. So, when Mt. Cuba Center rated ‘Pica Bella’ the cream of the Echinacea crop last year, she was nowhere to be found. Where will I plant them? Photo by Kit Flynn.

Despite the fact I have no room left in my garden, I ordered three ‘Pica Bella’ when Tony Avent offered them this year. Surely, I tell myself, I can make room for them somewhere.

However, my desire for Prudence goes out the window every January when the garden catalogues start filtering in. In January there are large gaps in my garden, especially in my perennial borders. Conceptually, I know there are plants slumbering underneath those exposed vacancies but the reality is that I’m spurred on to order those new plants that entice me.

An example of this is seen in an email Tony Avent sent out in March, announcing that he could now offer Rosa ‘Tausendschon’, a rose variety unknown to me. Now, as far as I know, this is the first rose Plant Delights has ever offered. It was released in 1906, making it an antique in my mind although it falls under the classification of a Modern Rose. Not only does it display disease resistance, it also (Tony asserts) is “the star of our spring open house weekends.”

How could I resist such a rose, one that was totally unknown to me? It only grows to a mere 144 inches. Surely my garden can accommodate this rose.

My order just arrived. Apparently, Phlox paniculata ‘Opalescence’ seduced me in January with its three-foot high stems supporting pink blooms. Nepeta ‘Cat’s Pajamas’ probably can be squeezed in with other Nepetas but why did I order three? Hosta ‘Branching Out’, with its showstopper flowers, was my only sane order as I only ordered one.

My real call for prudence came when I saw that I, filled with exuberance, had managed to order two of the aforementioned roses. This necessitated ordering two additional trellises to provide necessary support for these two roses that will eventually grow over 12 feet in height. Clearly, I have lost my mind. And, this is the reason I have a girl named Prudence and another named Patience, two qualities I desperately need.

Be the first to comment on "Patience and Prudence"