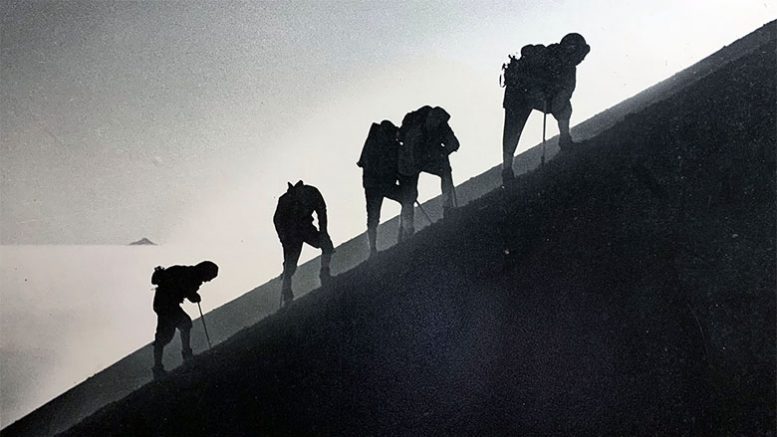 Silhouetted against the dawn sky, five mountain climbers — all young men — are bent double despite their youth as they labor upwards painstakingly in the thin atmosphere of 16,000 feet, fighting for every breath.

Three steps up, then rest, three more steps…rest…three more steps up the flanks of the dormant Mexican volcano, Popocatepetl, el. 17,802 ft. The “scree” slope of volcanic sand making the going slow and treacherous; and this was before the team reached the solid ice sheet yet to come. Even more treacherous.

Almost six decades later, I am kidnapped by the indelible memory: Spread out on the kitchen table are many more such fading black-and-white images — documenting the “Mexican Alpine Expedition” — an overly ambitious and ill-prepared mountain climbing project my senior year at UNC-CH that almost cost me my life.

And therein lies the tale.

The Most Unforgettable Christmas

What was the most unusual Christmas Day you ever had?

For this scribbler, the answer is easy. That would be Christmas 1966, which I spent alone, nursing a badly sprained ankle at a base camp in a Mexican alpine pine forest, while my college buddies climbed Pico de Orizaba.

What possessed me with the notion that I could photograph such an adventure, I’ll have to chalk up to youthful zeal and some degree of lack of common sense. Back then, I and every other dewy-eyed kid with a camera would be satisfied with nothing less than shooting for National Geographic Magazine. Covering the “Carolina Mexican Alpine Expedition” on their Christmas Day ascent of Mt. Orizaba seemed just the ticket for the hotshot photo-whiz boy.

I reckoned that climbing in ice and snow in the Mexican Rockies couldn’t be that different from hiking in the Colorado Rockies, the latter of which I had done the prior summer of ’65.  After all, at 21, I was the head photographer at the DTH and a Big Man on Campus, full of spit and vinegar — as invincible as I was immortal.

I was recruited by a team of more experienced college-age climbers: team leader Robin Wright of Tryon, Gordon Strickler of Spartanburg, S.C., Barry and Hugh Gordon both of Goldsboro; and John Thorne of Atlanta, GA.

After classes were out that fall semester, the six of us drove non-stop for three days in an all-suffering VW bus to the remote region east of Mexico City, where we set up base camp at 14,000 feet on the flanks of Mt. Popocatepetl, nicknamed “Popo.” Here, or so the plan went, we would do our training and get acclimated to the altitude. Or at least try to.

We base camped in an unheated stone shelter built for climbers — a fireplace our only source of warmth. The immense snow-capped conical mountain towered above us as picture-perfect as Mt. Fuji.

On the first day, Robin, our senior member and expedition leader, demonstrated the life-saving maneuver called a “self-arrest.” This required the falling climber to put all his weight on his ice axe, assuming it was still strapped to his wrist. The blade of the axe would presumably cut into the snow and slow his descent like an anchor.

Obviously, in a “free fall,” there is no such life-saving option.

Dutifully, but somewhat absently, I listened to Robin, as most airline passengers listen to a flight attendant describing life-saving procedures aboard an aircraft. Only half-listening.

This will never happen to me. No. Not me.

The Ascent of Popo

On the day of the assault on Popo, we arose at 4 a.m. to begin our climb. We knew that in the high Rockies, microclimates dominate the high peaks above 14,000 ft. We must reach the summit and be off by noon, for huge and deadly storms socked in the summit daily. To be caught on the summit in such a “whiteout” meant certain disaster.

The climb began along a well-worn trail, but turned nasty when we hit the scree slopes formed by ultra-fine volcanic dust. As the sun rose spectacularly over a cloud bank below, the wind whipped up a dust storm and the tiny granules found their way into our teeth, nose and ears, only goggles saving our eyes. One of my cameras, after giving me the climbing image I wanted, shut down forever, jammed by the fine grit.

Slow going through the dusty slopes gave way to an even more formidable challenge when we reached the snowline. To our boots we attached ice-grabbing cleats called crampons. Up the immense ice field, we traversed for hours, cutting each step with our ice axes.

The thin air of 16,000 feet forced us to stop for breath and rest after only four steps. Thus, for hours, we hacked our switchbacks, crisscrossing the giant face of the mountain, like a tiny team of Lilliputians scaling the side of an icy Gulliver.

It was at the very top of the steep ice slope that we paused again, almost within sight of the summit at 17K. Standing there, resting on our ice axes, puffing for breath, we witnessed an awe-inspiring panorama of mountains and countryside spread out below.

If Not for my Ice Axe…

What happened next, I still can’t fully explain. I only know that the next instant I found myself falling — headfirst, hurtling, sliding, out of control, backwards down the mountain.

Hey, I’m the guy who’s supposed to photograph this happening to somebody else!

My second reaction, odd as it may seem, was to listen to the magisterial sound of the mountain whooshing and rushing by beneath me.

My third reaction was blessedly: self-arrest.

Flipping over, I got my head going up the mountain, and my feet facing down the mountain. And the ice axe — which was still strapped to my right wrist — underneath my chest. I threw my full weight on the axe, so its blade bit into the ice like a dagger.

The shaft split with a bang — the left side of the staff fell away, leaving me with only the axe blade in my right hand, luckily still strapped to my right wrist.

With both hands I clung to the axe, stabbing its pointed blade into the speeding mountain.

Moments later, my crampons began catching on softer ice, and I sensed I was slowing. My left boot dug into the snow and ice, and the force of my sliding fall jerked my ankle upward at an unnatural angle; I felt something go. But I was slowing. Presently I slid to a stop.

Brushing the snow from my goggles, I looked up, expecting to see my buddies a couple of yards up the slope. But instead, I saw nothing but white, icy expanse. Looking again, I spied tiny dots far up the ice field. Could I have fallen that far?

The next thing I knew, team leader Wright was descending in a controlled slide on his fanny and using his ice axe as a brake — a maneuver called a “glissade.”

Amazed that I was intact, he exclaimed, “You just fell 600 feet. Look there,” he pointed downhill, where a sheer cliff yawned into space — just 50 feet from where I had come to a sliding halt.

But I was too focused on what was coming next to be reflecting about what had just happened. How to get down the mountain with a bum ankle?

Keeping my boots on, I could walk on the sprained ankle, and so Robin accompanied me successfully back to base camp. There, before my buddies returned from their climb, I was feeling downright smug and giddy.  Had I not saved my own life because of my prompt reflexes?

Then I turned to look back at the mountain that had almost taken my life: The sheer size of the mountain, the huge ice slope, and the precipitous cliff below. And it hit me. I hadn’t saved myself at all. Some force, something larger than my puny efforts had done the saving. I got down in my sleeping bag and bawled like a baby. Three days later, ankle wrapped with an Ace bandage and another base camp established, I spent a reflective Christmas Day alone on the flanks of Mt. Orizaba while my buddies successfully scaled the heights — albeit without the expedition’s climbing/falling photographer.

I still have that busted ice axe. It hangs on my wall, a mute reminder of the best and most cherished Christmas gift a young man could ever receive. Taken immediately upon their return to Chapel Hill, Jan. 2, 1967, this photo reflects the collective state of members of the climbing team: BEAT! From left, they are Robin Wright of Tryon; Gordon Strickler of Spartanburg, S.C.; Barry and Hugh Gordon, both of Goldsboro; John Thorne of Atlanta, GA.; and Jock Lauterer of Chapel Hill. (Photo by Jock Lauterer).

3 Comments on "55 Years After, the Fall Remains Vivid"