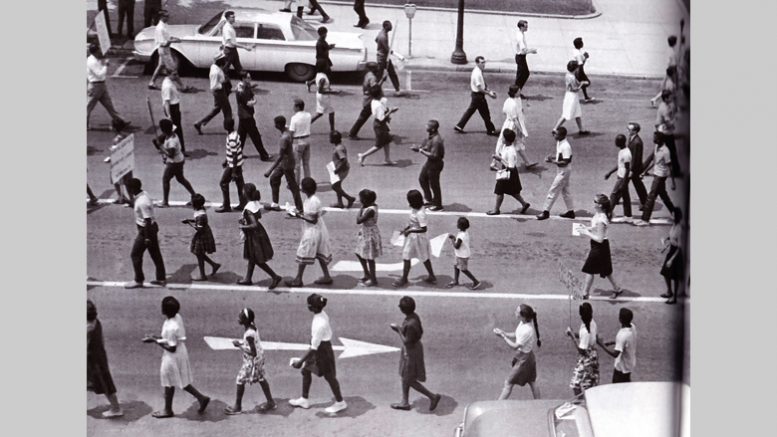 “f/8 and be there!” — the old-school photojournalist’s equivalent cheer of “GO HEELS!” for Tar Heel fans — might as well have been created by James (Jim) H. Wallace Jr., fabled DTH civil rights photographer.

My old college mentor, who died at age 77 on June 14 in Melbourne, Fla., embodied the working street photographer’s battle cry: don’t worry about the technology so much as getting out of the newsroom and into the fray — in the thick of the action, feet on the street, boots on the ground, mud on the boots.

Empowered by an uncanny sense of when and where the action was going to come down, coupled with his subtle ability to become practically invisible in a crowd, Wallace shot iconic images of Chapel Hill’s civil rights struggle, 1963-’64, later to be preserved in his 2011 book “Courage in the Moment: the Civil Rights Struggle.”

As a freshie understudy at his side during many of those demonstrations, I am forever indebted to the chief photog at UNC’s award-winning college newspaper for showing me the ropes on the fly.

Wallace’s admonitions still ring true a half century later: Stay ahead of the action, get in close, shoot for emotions, look for moments, be fearless, befriend first responders, event organizers, know all their names.

To make this photo, dated Feb. 8, 1964, Jim scampered up the stairs in old Battle-Vance-Pettigrew dorm to get a high oblique view of the civil rights demonstrators marching up and down Franklin Street in front of the post office.

In this defining moment following the murder of George Floyd, it is well we consider how our community has dealt with the multiple issues of systemic racism. For a moment of enlightenment, take a thoughtful walk down to St. Joseph C.M.E. Church’s tribute photo wall at 510 W. Rosemary St., where some of Wallace’s memorable photographs from “the struggle” are immortalized in stainless steel photo prints.

[For more information on “Courage in the Moment” and to see Wallace’s photos, check out the Marian Cheek Jackson Center site: https://archives.jacksoncenter.info/JW ]

Be the first to comment on "Jim Wallace: f/8 and Be There"