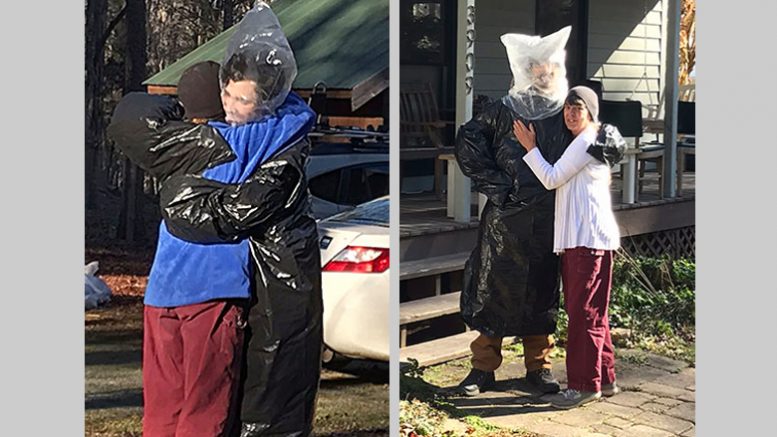 If you’re like me, you are suffering from the secondary malady brought on by the pandemic, HDD. (Hug Deficit Disorder).

I am the father/“bonus dad” of five grown children and “G-Pop” to nine grand young’uns — none of whom I’ve been able to hug for almost a year.

That’s why when I heard Scottie and Mike Yarboro’s story about the trash-bag surprise hug laid on them by son Ethan Johnston, I laughed ‘til I wept.

Scottie and Mike, neighbors of ours at our cabin out west in Rutherford County, had come to visit Ethan in Carrboro the weekend after Christmas — an especially significant visit since COVID had forced them to cancel traditional gatherings on both Thanksgiving and Christmas Day.

Driving into Carrboro, the parents were fully prepared for another one of those awful, masked and awkwardly distanced and touchless visits with their loved one.

But their innovative son had other ideas. “The goal was being able to hug,” said the 33-year-old Ethan “I knew how important it was for her — and for me too!  So, it was very important for me to find a way to hug.”

Ethan, the purchasing agent for Fifth Season Gardening Company in Carrboro and an ’09 UNC grad with a degree in psychology, says, “I like problem-solving.” After several iterations of what he calls “the trash-bag hazmat suit, he hit upon the wardrobe construction formula: three overlapping black 50-gallon trash bags and a clear bag for his head, “so I could see.”

When his parents pulled up in the driveway, Ethan was waiting.

As you can see from the photos, Ethan’s mom was so “surprised, shocked and excited,” that she forgot to put on her own mask. Luckily, Mike had the presence of mind to fire off these photographs.

Recalling the joyful ambush, Scottie exults, “I definitely got choked up when I felt my son’s arms around me for the first time in 10 months!”

MacGyver would be proud.