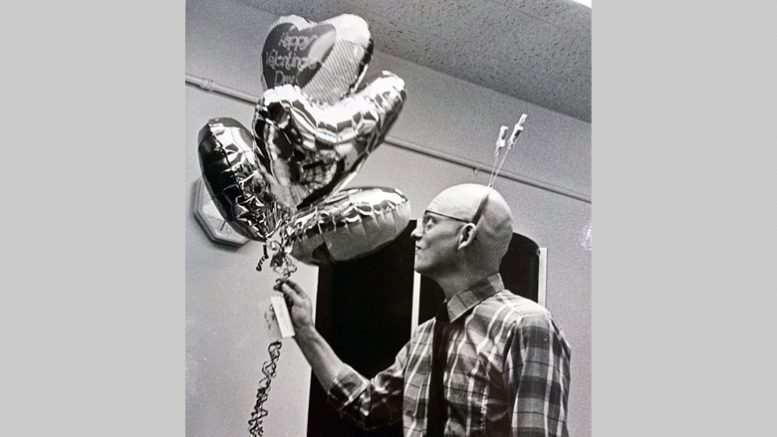 Somewhere midway through my photo class lecture on apertures and shutter speeds, there came a small but persistent tapping on the classroom door in Howell Hall. Then, without bidding, the door opened slightly, revealing a woman’s smiley face wearing a mischievous grin.

The next thing I knew, the merry intruder burst into my classroom, accompanied by a fist-full of gayly colorful helium balloons. Summarily, she ordered me to sit on the teacher’s stool, and the moment I complied, she burst into “You are my Valentine …,” sung to the tune of “You are my sunshine, my only sunshine.”

Then on my bald head, she affixed what can only be called a “head-bopper” — a bright red, plastic head-band with two wire prongs with bobbing stars mounted at the end that bobbed about wildly like an insect’s antenna. (For the elders: think of John Belushi as a Killer Bee in the classic SNL skit)  In short, whoever dons a head-bopper better have a healthy ego and penchant for self-deprecating humor.

My UNC photo class, clearly complicit in the scheme, joined in the surprise party merriment, one I’ll never forget, some 35 years ago.

And that’s how far back I go with Balloons and Tunes, the venerable Carrboro fun factory run by the irrepressible duo of Pat Garavaglia and Sharon Collins, both now 68.

Instead of dwelling on the sad news of the store’s closing due to the pandemic, let me share a story that amply demonstrates why B&T is so beloved in our community.

After teaching gigs at Brevard College and Penn State, I returned to UNC in ’01 to teach photojournalism and community journalism — the latter dedicated to uplifting and supporting North Carolina’s 190-plus smaller newspapers, literally from Murphy to Manteo.

With the rock-solid support and encouragement of then J-School Dean Richard Cole, I had gotten the inspiration to start a summer journalism roadshow for these smaller papers, most of which were staffed by reporters who could really stand to benefit from a free, on-site, nuts-and-bolts journalism workshop; sort of “J-School in a Day.”

We called it the Johnny Appleseed Summer Community Roadshow, in honor of another backroads wanderer planting good things to take root and enrich the rural landscape. I hoped maybe I too could spread some “seeds” of my own in those little newsrooms.

Now, I take myself pretty seriously when it comes to teaching, and I’m pretty good on my feet, sans notes, with a crowd I know. But how to deliver an effective “cold teach” — that is, how to connect impactfully with a room full of strangers? From experience I had learned the outcome of the class depended deeply on the culture of the cohort. Wouldn’t it be useful to know in advance if I were going to talk to folks who worked at a “happy shop” or a snake pit?

That’s when I remembered the head-boppers.

No matter that it was 16 years prior, when I called them with my wild hair of an idea, Pat and Sharon remembered me and my embarrassment. And when I floated my proposal to them, they were all in.

In fact, they had stashed in the crawl space under their house a cache of unique head- boppers that they designed and had made to celebrate the Tar Heel basketball program back in ’81. Instead of bobbing stars, balls or Pac-Man figures, Pat and Sharon had tiny styrofoam Tar Heel symbols affixed to the wire antennas. Proudly, they told me that the “Heely-Boppers” were so silly that The Charlotte Observer actually named the goofy headgear as one of “The 10 Worst Ideas of the Year.”

Bingo. I knew I had the solution. The alleged worst idea turned into the best solution.

Before each workshop, I’d have access to the paper’s conference room, where I’d place on the table in front of each empty chair a hand-out, my business card and a head-bopper.

Then, when the news staff filed into the room and took their seats, I would simply stand there and watch their reaction. The head-boppers never failed to predict the collective mental health and sense of well-being (or lack thereof) of any newsroom I ever visited.

If staffers began quickly to don the head-boppers and tease and joke with each other, it was a happy shop (and not surprisingly a staff that produced a superior paper). But on the other hand, if staffers sat down, spotted the head boppers, kept their hands in their laps, leaned back in their chairs, cutting their eyes left and right to see what others were doing — and generally behaved like I’d placed a dead skunk on the table — then I knew I was in a toxic work environment. You can imagine what their newspaper looked like, too. The staff of the Mt. Airy News, 2003, proudly poses with their Pac-Man head-boppers from Balloons and Tunes.

As for Pat and Sharon, the creative queens of B&T from 1980-2020, that’s a lot of balloons. And tunes. Closing a business that you built from scratch and then managed successfully for 40 years is simply “bittersweet,” says Pat. “Very bittersweet.”

But there are so many good memories, and thousands of customers who also have good memories, they say, after having delivered balloons to every occasion from proposals of marriage to a ceremony commemorating a child’s dead goldfish. Plus, they say they have experienced “everything that can go wrong in the balloon business going wrong” — topped by the time they left the back door open of their rented U-Haul truck — and while they were driving down the highway, 500 balloons escaped into thin air.

More than just a balloons and card shop, B&T was “a political gathering place, where you came for therapy if you needed it,” says Sharon, “and if we’d have had a pot-bellied stove, it would have been like the old-fashioned country general store.”

Following this coming week’s inventory clearance sale (likely beginning Tuesday with limited access to the store and many items at 50-percent off), B&T will likely close for good — “Unless a miracle person comes in and takes it,” says Pat. But then, they say they’re looking forward to “the next chapter in our lives.” As Sharon says, “There’s gardening to be done.”

1 Comment on "Balloons and Tunes: Thanks for the Memories"