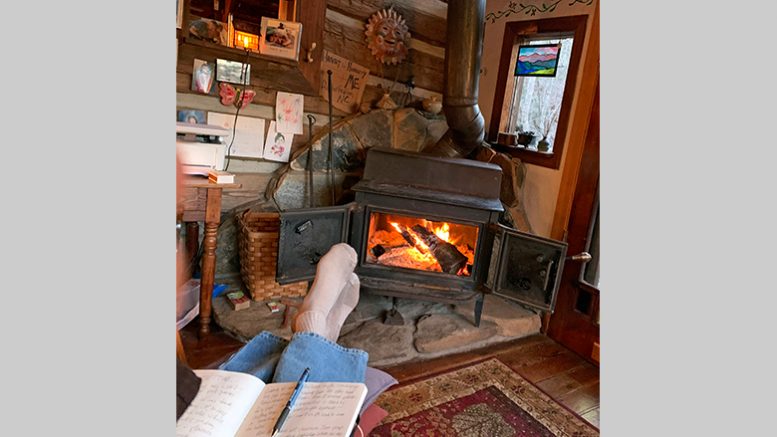 “Fire is the most tolerable third party.”
• Thoreau

It’s been raining now for three days straight — that cold nasty chilly winter rain. I’d prefer honest snow any day — the kind we had during my 10 years at Penn State, where Pennsyltuckians understand the Eskimo concept of 50 varieties of the stuff.

But not here, it’s just a winter mix, sleet, freezing rain, snit. Whatever you call it, it’s soul-robbing weather.

Think I’ll put another log on the fire. My primitive response to the cold outside my cave. Not that far removed from the Neanderthal relations from which, Ancestry.com tells me, I sprang.

I, Grog, the latter-day caveman, bring in another log to cheer my mate, Thag, with the blessings of fire.

“I reckon you’re the last of the wood-burners,” drawled one of my neighbors recently, after donating a fine red oak that had toppled in his side yard. Whenever a dead tree in our neighborhood falls, I’m on it. Fodder for my woodshed beats that tree going to the landfill. Additionally, all that cutting, chipping, hauling and stacking provides exercise for me and income for some local chainsaw jockey.

Note to the reader: As some of you are aware, a cabin I built 40 years ago figures very much into this narrative, it being heated largely by wood and flanked by a very Swiss-looking woodshed to accommodate the three wood-burning stoves.

My woodsheds being chock-full, I feel as wealthy as Tevye singing “If I Were a Rich Man.”

My neighbor’s evaluation demands a response. Why would anyone spend so much time and effort in a practice that is labor-intensive, messy, dangerous and time-consuming — when all one has to do these days is go to the YouTube channel and, like 3 million poor souls, view a clean, safe, effortless digital “fireplace?” Oh, and with crackling fire sound effects added.

Why indeed? Because it’s real.

“Digital is not reality. It never was and never will be,” writes David Sax in his book, The Revenge of Analog: Real Things and Why They Matter.

Sax reasons, “The frustrating, rough, rainy world outside of our screens is the place where our bodies and our minds are at their best, and the place where they are built and grow and change.” Sax notes that there is even a tech slang term for the analog world outside the computer: “IRL” – “In Real Life.”

To all the folks glued to the electronic hearth, bless your heart. Call me old school, but a house without a fireplace lacks a soul. Consider this equation: HEART + H = hearth. Thus, a house without a hearth hath no heart.

I am not alone. One of my oldest and bestest pals, Doug Petersen, who lives up in western Michigan (where folks know a thing or two about how to stay warm) shares my passion for wood heat. Doug, of Danish descent, tells me that, when rural families gather to stock their woodsheds, the expression is evocative: “Puttin’ up the heat.” And there is a rich Scandinavian tradition of artful wood-stacking that shames the likes of me.

Of the meticulous fancy designs made by those Scandinavian wood-stackers, Doug says with a grin, “When you live 200 miles north of the Arctic Circle and it’s dark for three months out of the year … whatta ya’ gonna do?!”

When Doug and I rhapsodize about our devotion to our woodburning stoves, we wax eloquent about the Ashley, the Buck Stove, indestructible double-door Fisher “Grandfather” stoves from the ‘70s, the artful Dover “Starburst,” the dependable Vermont Castings “Resolute,” and “Vigilant,” the venerable Norwegian Jotul, or Doug’s pride and joy, his 365-lb. Danish Rais Woodburner made of “Swedish naval-grade steel.”

To us wood heat geeks, this is a merry topic of discussion. We gladly admit to being addicted to “the art of fire” and fire-tending as a hobby — a lifelong passion that was ignited back in our Scouting days and spilled over into the back-to-the-land movement of the ‘70s,
when some of my generation fled the cities for the joys, trials and tribulations of country living and owner-built homes, in which wood heat was central to our lifestyle.

Capturing the zeitgeist of the ‘70s, publications like The Mother Earth News, the Whole Earth Catalog and the Foxfire books all celebrated wood heat. And none better than the back-to-the-lander’s bible, Chop Wood Carry Water, in which author Rick Fields opines, “We can find the profoundest heights and depths of spiritual life in our everyday life … of such simple, basic, down-to-earth tasks as ‘chopping wood and carrying water.’ ”

In that lifestyle, wood heat was the coin of the realm (none of us had heat pumps or, god forbid, baseboard electric heating!). The wood-burning stove was the physical manifestation of the times and of the homesteading movement.

Those heavy-duty totally utilitarian wood stoves were a product of the times, when all us “back-to-the-land hippies,” as some called us, demanded an efficient, cheap, simple source of heat using the plentitude of renewable resources we had on our land.

Perhaps you’ve heard the old saw: Wood heats you twice — once when you cut and haul it, and second when you burn it. Moreover, there’s a whole legacy and lore behind the practice: I have my grandfather’s ax and hatchet from the ‘30s. I am familiar with tools with fitting names like the go-devil, come-along, wedge and maul.

And you must learn the art of fire: What kind of wood should you burn? Never pine! It has to be hardwood, preferably dried oak, hickory, ash or cherry. And then the lovely and almost holy red cedar to be split into little pieces for fire starters. There’s no smell better than freshly split red cedar; at our house, we joke that it’s our drug of choice.

While we use our wood stoves mostly for comfort, aesthetics and romance, there are many folks in our state for whom wood heat is a necessity.

Up in western North Carolina, a local TV station recently featured a grizzled old mountain man with an impressive wood-splitting operation in which he converted donated logs cut from construction sites into firewood, which he delivered to folks who, in this pandemic economy, had no choice but to heat with wood. “Can’t keep up with the demand,” the good soul told the broadcast reporter. The TV station named him its 2020 Citizen of the Year.

If it were in my power, I’d throw in the state’s highest civilian award, The Order of the Long Leaf Pine, a fitting title for a backwoods angel.

Finally, we swing back to my pal Doug, who happens to be a retired Presbyterian minister and pastoral counselor. When insects known as the ash borers killed an ash grove outside his Michigan home, it provided him with a wealth of firewood, plus the opportunity for a woodburner’s play on words. As Pastor Doug says, its “ashes to ashes.”

Since we began with Thoreau, we’ll also end with the bard of Walden:

“The youth gets together his materials to build a bridge to the moon, or a palace or temple on the earth … the middle-aged man concludes to build a woodshed.”

For more on the Inuits’ words for snow:
https://readable.com/blog/do-inuits-really-have-50-words-for-snow/

Over three million visits to virtual fireplace (with sound):
https://www.youtube.com/watch?v=NiqM3lVirkw

Saluting Milton B. Robinson and The Harris Herald, Rutherford County’s “Only Negro Newspaper”

1 Comment on "Hearth and Home, of Thee I Sing"