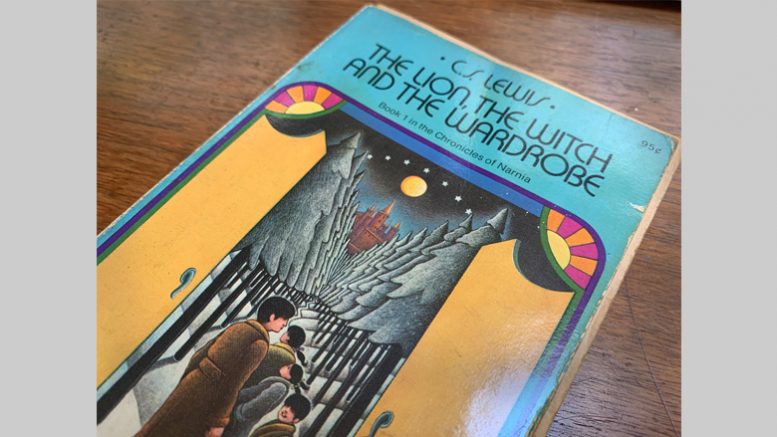 Sixty-four years ago, I went to Narnia, where I became a lion named Aslan.

To get to that foreign land, I didn’t need a passport. But I did need a great teacher to open the magical door through the old wardrobe.

And I didn‘t go alone. With me I took 30 of my sixth-grade classmates, fortunate enough to have been the students of one Walter “Coot” Hooper at Chapel Hill Elementary School, 1956-’57.

Too innovative, too independent, too creative, too prone to ignore the imposed curriculum of study and go his own way (think Robin Williams in “Dead Poets Society”), Mr. Hooper must have been the bane of the school administration; little wonder he wasn’t asked to return for a second year.

Mr. Hooper’s most drastic and dramatic departure from the standard curriculum was a stage production of C.S. Lewis’ book, “The Lion, the Witch and the Wardrobe,” a modern allegory/fantasy set in the mythical land of Narnia invaded by an evil White Witch who tries to turn the land into constant winter.

While his academic superiors may have been apoplectic about his impetuous approach to teaching, his students loved him. To this dweeby 11-year-old being raised by a single mom, Mr. Hooper was like a second father. And I suspect he knew full well what a game-changer it was for me to have been cast as the play’s male lead, Aslan, the god-like Lion.

Fast forward to 2020: In a column earlier this summer honoring my “sub-dads” on Father’s Day, I highlighted Mr. Hooper as one of those village dads. The following week I received the most amazing email from a dear friend of my wife.

Pam Winton, a former colleague of Lynne’s at Frank Porter Graham Child Development Institute, wrote to say that one of her best lifelong gal pals was Mr. Hooper’s cousin, and that at 90-something, Mr. Hooper was still very much alive, retired in Oxford, England, where he had long served as. C.S. Lewis’ secretary, biographer and protégé.

You could have bowled me over with a feather. I sat right down and knocked out this letter to Mr. Hooper.

By a most circuitous route, your old Aslan has stumbled on your contact info and general condition report via your North Carolina cousin from Reidsville, N.C., who is a pal of one of our best friends here in Chapel Hill.

Suffice it to say, this all started with a Fathers’ Day column I wrote for the local paper that somehow found its way to you. The idea of you reading that tribute set off a cascade of memories and images of the school year, 1956-’57, when you, good sir, singlehandedly changed the young lives of a gaggle of dwarfs, elves, fauns, plus one bad-ass witch and a very young lion.

That you are still very much with us inspires your protégé to assemble the cast of “The Lion, the Witch and the Wardrobe” again, at least in a virtual stage. The point of all this is plain: all these years later, many of us remember daily lessons from you — while entire other years of school are as blank as a newly wave-washed beach.

And memory maker. It was quite simply, hands down, the best single year of 12 years of public education. And I have no doubt that it influenced me significantly when, after 20 years as a working journalist, I found my own way into the classroom, where I spent the next 30-plus years doing what I was meant to do.

Cataloging the images which flow back like a narrative slide show:

Click: You, reading C.S. Lewis aloud to us … and we, enthralled, are inspired to write our own stage version of the play. I recall distinctly Sally Ivey (DuRamis), sitting in the back left of the class raising her hand and calling out excitedly, “Mr. Hooper! Mr. Hooper! Could we make it a play?!” or something akin to that — which, of course, I now divine, was your clever intent.

I also remember just about everything about the play. Most notably this back story: That in the play,  I (Aslan) was “killed” by the White Witch, my former girlfriend, the lovely Paula Sturdivant (Mercer), who, in the real world,  had dumped me for Archie Kelly (who was “cuter”) — which only makes Aslan’s return in the play’s end all the more satisfying.

Click: How about French lessons? You were way ahead of your time, there, too. You realized we were fertile soil for a second language. Here’s proof: I bet most of your 70-something former students could probably recite this little ditty that you had us memorize. I certainly can never forget it:

Click: You introduced us to music appreciation — also way ahead of its time for 6th grade. You would pull down the window shades, then, on the record player, you’d put on a 78 rpm record, instructing us to fold our arms on our desks and rest our heads there as we listened to the music, (ex: Ravel’s “Bolero”) Then, you invited us to picture the images the music conjured up in our heads. And lively discussion followed.

Click: You also taught us biographical facts about classical music, too. I bet I’m not the only one of our cohort who can effortlessly spell the name of a certain Russian composer …

Click: So maybe you didn’t teach us a lick of 6th grade math (bless your heart). What you did teach us was for more important, practical and impactful.

Click: You introduced us to soccer, an international sport about which we knew almost nothing. I remember the other kids on the playground staring at us gaggle of Hooper kids (including YOU) thumping that kickball around. Again, you were way ahead of your time. Now look at soccer in middle schools. It’s everywhere.

Click: And finally, one day when we were all acting out, you stood up behind your desk and shocked us with the announcement that you too were a human being and had a life outside the classroom (an astonishing revelation to us 11-year-olds) — and then you cried out in exasperation something to the effect of: ”What do you think I do at the end of school? Just crawl into my desk and wait for you all to come back to school the next morning?!” ­

Actually, that’s exactly what we thought. Never occurred to us ­that a teacher might actually be a living flesh and blood human being with a real private life outside the classroom. A revelation I’ll always remember.

There’s more, I’m sure, and I’m hoping Winborne Shaffer (Chanborne), Paula Sturdivant (Mercer), Gale Greene (Howden) and some of the others from that class will chime in — all this to tell you yet again what a lasting impact for good your single year at Chapel Hill Elementary School had on a cohort of kids, now all in their mid-70s, whom you took to a magical land.

Alas, there seem to be no existing photographs from our class play — only a book cover to play feeble second fiddle to actual images of that place in time; thus, I have no visual proof of my experience as a boy lion.

Additionally, Aslan isn’t listed on the playbill. Whether this is an oversight or intentional we may never know. My hunch is this: Mr. Hooper, who cast the entire play, did this on purpose, not wanting the audience to think of the Great Lion as a goofy kid (who was inside a borrowed Playmakers Theatre costume from a recent production of “Androcles and the Lion.”) — but rather as the spirit animal that indeed Aslan was.

So, what if there are no photographs from this long-ago event? And so what if my name is left off the playbill?

Maybe it’s a signal from the universe. Maybe we’re supposed to go on memory and faith.

Isn’t it enough of a miracle that we found our old teacher, 64 years after? Still in time to thank the man for his profound influence on our lives. Flowers for the living.

2 Comments on "Back to Narnia"