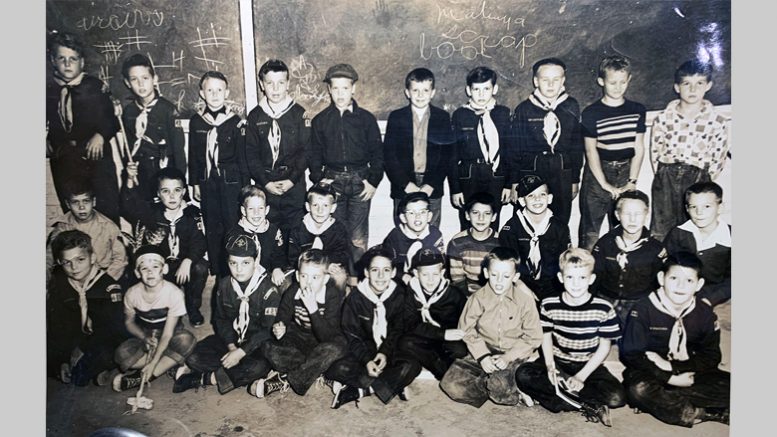 In celebration of Boy Scout Week, let’s unpack this 1953 photograph that captures four of my life-long guy pals and me.

New Cub Scout Pack 421 is being formed; a gang of 28 boys from Chapel Hill-Carrboro (all-white, shamefully) line up for their group portrait. We are mostly eight years old, many of us meeting for the first time, there in a barracks building/Quonset hut in Victory Village, the pop-up post-WWII pre-fab housing project installed for returning veterans and families, located just down from the new, one-year-old N.C. Memorial Hospital on South Columbia Street.

One-two-three … click! A split second through the camera’s lens from six decades ago becomes a tactile object.

I remember the moment: a man with a big two-fisted 4×5 Speed Graphic press camera and a blinding flash. Roland Giduz most likely, or Bill Sparrow. Maybe young Bill Brinkhouse.

My mother, ever the keeper of the family archives, purchased the 8×10 black-and-white photograph with “Press Photo Service Box 44 Chapel Hill NC” stamped on the back. And then she meticulously penciled in the names of the boys as best she could — right to left, front to back, question marks over blanks to indicate boys she couldn’t identify.

Front row, right to left: Carl Brown, Timmy Keith-Lucas, Gary Pickett and Billy “Cotton” Tyler.  Next is C.L. Bowen, who lived on my street and was one of the gang of a dozen boys who made growing up on Pritchard Avenue so much fun. Then comes Gordon Cleveland, who is nailing it, followed by yours truly. My glum expression is the result of getting told that before I could go camping, I had to wait … three … more … years … until I was a Boy Scout. Argh! To Sadsack’s right (your left) there’s Jimmy Scott wearing a headdress, with John Fox at row’s end.

Second row: right to left: An unidentified boy beside a flash-blinded David Neville. Next comes my life-long chum Scott Parker, all ears and mischievous grin. Scott, who still lives here in Chapel Hill, retired after serving as director of the Institute for Outdoor Drama at UNC-CH. Just recently we’ve renewed our pact: once it’s safe to go out again, we two old Scouters will resume our monthly dives into BBQ at Linda’s on Franklin.

Then comes Bobby Madry and then Rusty Edminster. Next there’s the late great Johnny Gouger, whose zany sense of humor and infectious laugh still rings in memory. The percussionist in our high school folk group, he was the master of the wooden spoons and cooking pot. A regular jokester at Merritt’s Store and Grill on South Columbia, he is sorely missed. Next comes Pat Mann, another dear friend into adulthood, followed by two boys my mom couldn’t identify.

Third row, right to left: my mom labeled the first kid “Glen Gould” (but I wonder about that). An unidentified kid in a striped T-shirt is next, then Paul Bodenheimer, eyes closed, followed by two more unknowns, then Reggie Moore, another unidentified kid, Johnny Hinson and Patch Rankin.

Which brings us to the last kid on the far left. Slouching there against the blackboard eraser tray is big Davy McConnell, who in high school teamed up with me and Johnny Gouger to form a folk group called “the Zombies Three” — our name an oblique homage to the Kingston Trio, who, along with Peter, Paul and Mary, were our heroes. High school graduation broke up the Zombies — Johnny going into the service, me into journalism, and Dave into medicine.

After Duke Med School and a stint in Pittsburgh, Dr. McConnell would go on to become a beloved pediatrician in Warren, Pa., where he served for 37 years before retiring last year and moving to the Asheville area, just a stone’s throw from my cabin near Lake Lure/Chimney Rock.

The two surviving “Zombies” reunited last month at Dr. Dave’s new home, where we regaled each other with memories of high school hootenannies. (Young folks, Google that.)

Later this spring, we’re threatening to haul out our banjo and guitar and have another go at “If I Had A Hammer.”

All these years later, I’m looking at this photograph through a different lens — a big picture perspective of long-lasting friendship, of boyhood bonds that reach back almost 70 years to early elementary school days.

Now that’s something worth celebrating.

For more on Victory Village: https://museum.unc.edu/exhibits/show/crisis/victory-village

For more on Quonset huts: https://en.wikipedia.org/wiki/Quonset_hut

For more on Merritt’s Store and Grill: https://chapelboro.com/town-square/merritts-store-grill-serving-since-1929

For more on Linda’s Bar and Grill: https://www.lindas-bar.com/