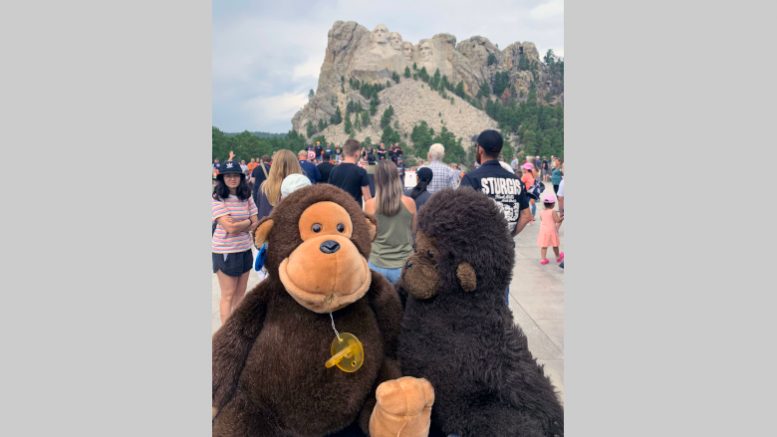 Readers familiar with A. A. Milne’s classic “Winnie the Pooh” will remember the tale of the “expotition,” in which Pooh leads his woodland pals on a search for wild “heffalumps and woozles.” Pooh himself defines an expotition as “a long line of everybody.”

To be sure, “expotition” is an apt analogy for Mr. Bogey and George’s Most Excellent Wild West Road Trip — our current cross-country trek to return two stuffed monkeys to their rightful owner, our son, Rob, soon turning a fulsome 40.

In fact, our quest has taken on the elements of an expedition, with every memorable stop along the way requiring an equally iconic image of Bogey and George: On the sidewalk in front of wife Lynne’s childhood home in Cleveland, Ohio; by the western shores of Lake Michigan; sitting on a fence in front of a Mississippi River sternwheeler river boat — and most strikingly, posing at the base of Mount Rushmore with George (the other George), Tom, Teddy and Abe looking on in approval.

Now, as every good storyteller knows, an expeditionary “rattlin’ good yarn” is no good without a little danger, and here is ours: By a spectacular fluke in scheduling, we arrived in southwest South Dakota at precisely the worst possible time — just as hundreds of thousands of bikers on their big-dog Harleys descended on the area for the 81st Annual Sturgis Motorcycle Rally.

Consider this headline from the Aug. 8 edition of the Washington Post:

(Caveat: as a former biker myself, I can appreciate a good hog now and then. But 700,000?! That’s a danger — not to mention decibel level — of another scale.)

Cut to the chase: Just as we (in our N95 facemasks) were setting up this shot of Bogey and George at Mount Rushmore, hundreds of bikers also had apparently scheduled a group portrait in the same location. Look closely there in the background beyond the guy in the black Sturgis T-shirt and the woman staring at us, and you’ll see them lining up for their group photo.

But here’s the scariest part — not a single biker we saw was wearing a facemask.

To put it mildly, as soon as we made this shot, we beat a hasty retreat.

Now, on to Coeur d’Alene, Idaho, where Bogey and George will be reunited with our son, Rob, and be back home for good.

1 Comment on "The Further Adventures of Mr. Bogey and George"