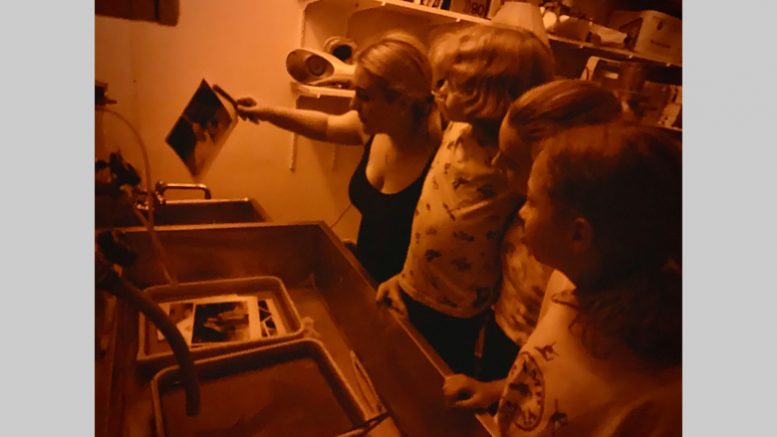 Analog: Something that is real; not digital.

Darkroom: A photographic lab for processing analog film and making photographic prints in chemical solutions using equipment, including an enlarger for printing, a sink for washing film and prints, and “safelights,” whose amber lights won’t spoil the white-light sensitive photographic materials, but which create enough light to see by.

Bee-Bop / G-Pop: Names my grandchildren have given me.

As any old-school photographer would attest, being able to develop your own film and print your own photographs in a darkroom is what separates the dilettantes from the hard-core serious photographers.

In an age where anyone and everyone “takes” pictures, real photographers make photographs — and to my mind at least, that requires a special skill-set and a very specific tech set-up — a photo lab, known as the darkroom. “Dark” because film and photo paper are light-sensitive. After all, light is a finite resource, and must be controlled with skill.

My first exposure to the darkroom came in high school in the early ‘60s when I became the staff photographer for the Proconian, the school paper of Chapel Hill High School. Of course, this was the pre-digital age, requiring that the photos I shot had to be developed and printed — a task assigned to freelance photographer Bill Brinkhouse, the talented 20-something son of the famed UNC Med School leukemia research pioneer and long-time chair of pathology, Dr. Kenneth M. Brinkhouse.

They lived in a modern house over in Westwood, and young Brinkhouse had built a custom photo lab in the basement. A game-changer for this wanna-be: Bill invited me to sit in as he processed and printed my photos for the Proconian. Seeing my first print magically appear in the developing pan, I let loose a loud whoop. “WOW!” — much to the delight of my photo-mentor, who knew in an instant the kid was hooked.

Fast forward to 2001: When the first of our nine grandchildren was born, I feared I would make a lousy grandfather. The only modelling I had had was my own maternal grandfather, a kindly but introverted academic librarian. A Dewey Decimal kind of guy. Not exactly Chuckles the Chipmunk.

But as a photographer, I bumbled my way to unique and effective grandfathering in the most obvious fashion. Having heard of the magic of putting simple “point-and-shoot” cameras in the hands of very young children, I instituted family “photo hikes” in which a simple walk in the woods turned into photo-cataloging of bugs, rocks, leaves — anything at all that grabbed their attention. It was an instant hit with the first wave 3-and 4-year-old grands.

The ground rules, were … well, there were no rules. That was the whole point. Shoot whatever you wanted. And then, with the wonder of digital allowing each kid to instantly share the image they had captured, it turned into real-time Show and Tell. Plus, it got them outside experiencing the fun and wonder of nature, be it the backyard, the woods or the beach; a critical need for any kid.

Jump-cut 15 years to the present, when most folks don’t use or need cameras, what with smartphones being as zippy as they are now. I began to get the feeling G-Pop’s famous photo-hikes had lost their attraction for the tech-savvy younger generation.

That’s when I realized it was time to go Back to the Future, photographically speaking.

So, at this past summer’s annual Cousin’s Camp — a week in which Lynne and I host whatever grandkids we can corral — I introduced four of our grands, ages 7-18, to honest-to-gosh analog photography, using what I will call “real” cameras, like the venerable Nikon Fm2, the war horse of old school National Geographic photographers.

After our photo session in the backyard, I took the four kids, ages 7, 11, 12 and 18, into the darkroom, a custom photo lab I had built into the garage, where I taught them how to develop film and to print their own black-and-white photographs.

When 7-year-old Finn, standing on a stool so he could see, witnessed the image of his first photograph appearing magically on the previously blank sheet of photo paper in the developing tray, the little boy hollered, “WOW!”

I suspect that up in the Big Darkroom in the Sky, Bill Brinkhouse is smiling.

For more on analog, see David Sax’ book, “The Revenge of Analog: Real Things and Why They Matter,” 2016,  www.publicaffairsbooks.com