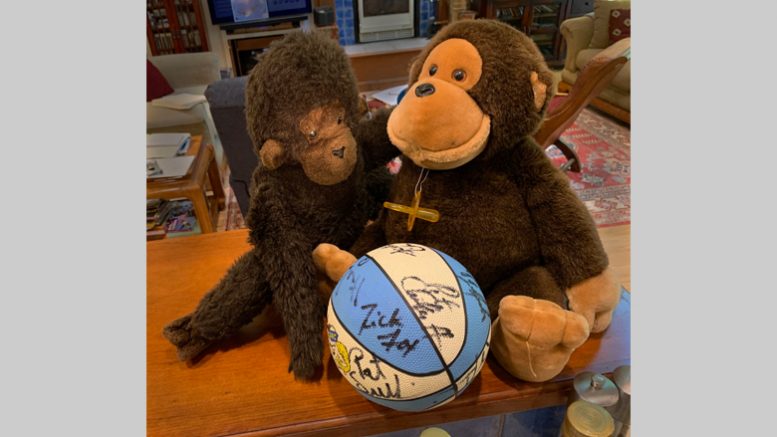 By the time you are reading this, Lynne and I will be somewhere in Ohio, on our way to Cleveland, where, by mysterious coincidence, we both lived as 1-year-olds.

We are on the road again. A part of the great American leap out the front door, thirsting for the New Not Normal and sites/sights unseen — joining thousands of other travel-starved folks, who, after 16 months of isolation, are yearning to go… anywhere.

Welcome to Part 1 of Mr. Bogey and George’s Most Excellent Wild West Road Trip, in which our avatars, two stuffed gorillas (or chimpanzees) will serve along the way as our visual stand-ins.

We’re headed for Coeur d’Alene, Idaho, where our son, Rob and his wife, Hailey, corral and wrangle a rambunctious pair of 3-year-old twins.

And now that Rob is turning 40 this fall, his mom and I decided it is high time that he take possession of his stuff — including his Lionel train set, his Micro-Mini car collection, a big box chock-full of baseball cards from the ‘80s, his team-autographed UNC basketball — plus, his stuffed animals. Which brings us to Bogey and George.

To make each stop along the way more fun, we decided that B&G would make for better visual fare than just me and Lynne, standing there stiffly like Ma and Pa Kettle in American Gothic.

So, watch this space for the further adventures of Bogey and George. And it will be an adventure for sure, dodging fires, smoke and heat, just for starters.

For as author Frances Mayes (“Under the Tuscan Sun”) so wisely says, “Travel is a journey into one’s own ignorance.”

The Rehabilitation of a Fallen-Away Cellist

Be the first to comment on "On the Road with Mr. Bogey and George"