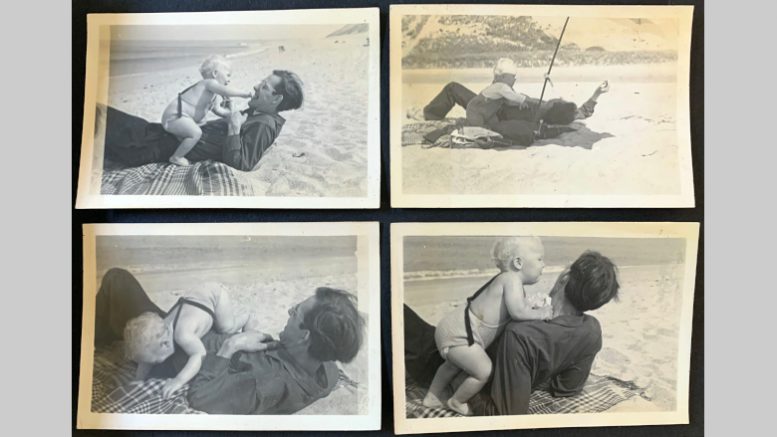 To the reader: the following is excerpted from my work-in-progress book honoring my late brother, Nick, titled, Keeper: A Brother’s Restoration.

Roly-poly on the beach, a tow-headed cherub clambers on his disarmed father like the man is his personal playground jungle gym.

Of all the snapshots hiding in dusty closets, glued to old-school, black-paged photo albums from the ‘40s labeled “Snaps,” this quartet of images stands apart.

Nick’s father, Arch, ever the director of his own photographs, which he treats like dramatic staged events of his own design, is captured here flat on his back, hair askew, in the sand of Truro Beach, Cape Cod, August 1941, happily undone by the cavorting 14-month-old, who is clearly having a grand old time; I can’t help thinking of the Dr. Seuss’ classic, Hop on Pop.

It’s said you can’t hear a photograph. Nonetheless, here’s a snapshot that fairly bursts with sound: the gentle waves, the gulls keening, the chortling child, the father’s protestations in vain and the giggling mother who is gathering it all in through the viewfinder of her trusty Kodak 35mm camera.

The caption in the snapshot reveals only: “Truro, Mass. After summer school at Bennington was over.”

To be sure, this excursion from Bennington, 265 miles away and inland to the northwest over two-lane roads, was no day trip. If anything, this beach trip was likely the result of a loaner cottage offered by an affluent colleague, or even theater patron — this being Cape Cod, even in ’41, a rented place would be beyond the pay grade of a young married professor with a new baby.

And what else? Nick’s outfit suggests his mother dressed him for the seaside occasion — while his professor dad looks as if he just stepped out of the lecture hall. Upon closer examination, it strikes me that these two figures appear to come from two different environments — the sunny beach-clad toddler versus the professor in long dark slacks and long-sleeved dark shirt — the latter outfit hardly being suitable summertime beach attire.

Additionally, notice the father’s body language, especially, his hands. Is he afraid of touching the kid? Wouldn’t any normal loving father under such playful attack, at some point reach out and grab the boy, his own first-born son, and give him a good tussle?

In the photo at top right, Arch actually appears in distress — incapable of a father-son frolic, clueless as to how to respond to old-fashioned play.

At a loss for affection or a fatherly physical response, he appears helpless, hapless, maybe even feckless. This quartet of images expose Arch like no others.

As to the back story, one wonders why the father is dressed so inappropriately for the beach. (I bet Myra, our snapshooter here, was wearing that red-and-white checkered bathing suit I remember well from my early childhood.)

As for Arch’s choice of clothing, maybe that’s the missing clue as to the true nature of this busman’s holiday — that he had agreed to the beach weekend only so long as he could keep working on his next theater production, its stage set design and lighting diagram, the costuming, the casting, the choreography, so forth and so on. The 10,000 things.

So here we see him taking a quick break from his beloved work to come down to the beach for a quick visit before returning to his true love, his demanding and unforgiving mistress, his first mate. The theater.

In spite of the foreshadowing back story, I dearly love these jolly images for their unrehearsed spontaneity and gaiety, a distant remembrance to mark Father’s Day.

Be the first to comment on "Hop on Pop"