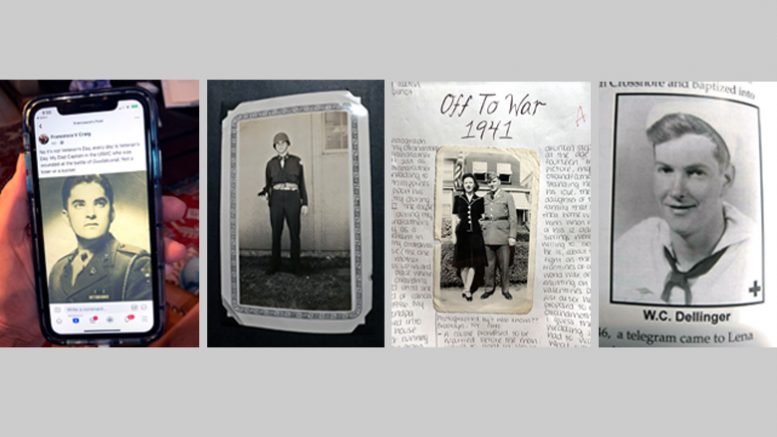 Up until now, in this space I have avoided the temptation to say anything even vaguely political; but herein, I succumb.

The latest outrage over service members being called “losers and suckers” is my tipping point.

And instead of a rant, I’ll let these photographs do the talking. Four old photographs, each with its own unique story.

Every day is Veteran’s Day

The first image came from our cousin Francesca Craig of Washington, D.C., with the following post:

“No, it’s not Veteran’s Day, every day is Veteran’s Day. My dad Captain in the USMC who was wounded in the battle of Guadalcanal. Not a loser or a sucker.”

The Monday after Pearl Harbor

My wife’s father, like so many other young Americans, didn’t wait to get drafted, enlisting the very next day after Pearl Harbor, Dec. 7, 1941. Here is Bruce “Fuzzy” Vernon, possibly just out of basic training in Florida, with his sights set on becoming a fighter pilot. But a serious bout with pneumonia grounded Vernon. He devoted his considerable mental talents for the remainder of the war to serving with the U.S. Army Intelligence, rising to the rank of captain.

The wedding had to wait

Another photo labeled “Off to War 1941” comes from my oldies-but-goodies class file, submitted by a UNC student 14 years ago for a photo exercise exploring the documentary power of snapshots. Her caption reads: “A couple promise to be married before the man leaves to fight in World War 2.”

The granddaughter writes about the crinkle-cut period snapshot, “Here he is, heading to the Philippines to support his country during WW II … about to fight on the frontiers of a world war after enlisting on Valentine’s Day just after proposing to Grandmother. I guess the wedding just had to wait!” And she adds, “What surprises me is how happy they look, even though he is about to risk his life.”

My first wife’s uncle, William Colbert “W.C.” Dellinger, was only 18 when he was killed in an ambulance roll-over at the U.S. Naval Station at Cocoa Beach, Fla., in 1946. The medic corps volunteer, a lanky smiling mountain boy from the Blue Ridge of Western North Carolina, had just written his mother a letter saying he sensed his own imminent death and for her not to worry.

I’ll let Maggie Lauterer of, Crossnore, N.C., pick up the story. “When his mother and father received word that their only son had died, his mother had just received the letter, and it was still unopened. W.C.’s body was sent home in a sealed coffin. They buried him on July 4. To this day, members of the family gather the roses that grow along the roadside and take them to cover his grave. Just as they had done on the day he was buried. 74 years of roses.”

On the Unintended Power of the Snapshot

Road Warriors in the Time of Covid