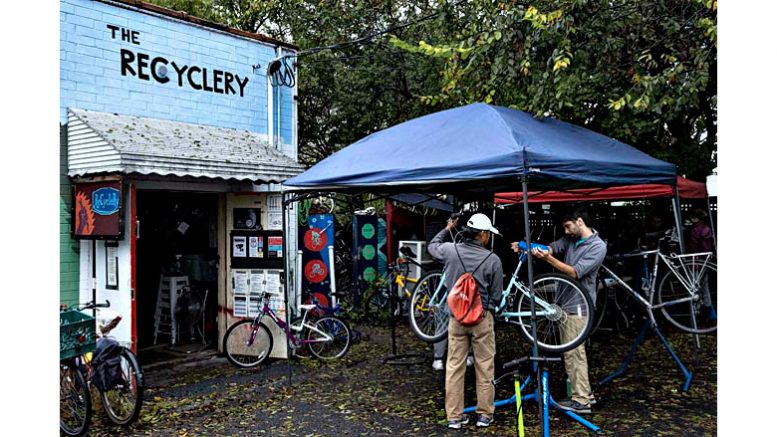 A volunteer mechanic adjusts a saddle during an open repair weekend at the ReCYCLEry. Photo by Michael Schwalbe.

On the first and third weekends of the month, every bike at the ReCYCLEry in Carrboro is priced the same: however much of your labor is needed to make it ready to ride. Choose a bike from among the dozens—or hundreds, if you count frames and partial bikes—clean it, refurbish it with the help of a volunteer mechanic, and it’s yours. Ride away happy.

The ReCYCLEry, established in 2000, is a non-profit bicycle co-op. Its aims are to repair bikes and keep them in use, to get more people riding bikes, and to teach people how to maintain and fix their own bikes. The organization has no staff; it’s run by volunteers and survives on donations and proceeds from annual bike sales.

Every other weekend from March through early December the ReCYCLEry holds open repair workshops (10 a.m. to 2 p.m.) during which people can find a bike to spruce up and take home, or bring in a bike to have it repaired by a volunteer mechanic. Tools are provided and parts, if on hand, are free.

Tucked into an alley at 108 N. Graham St., behind The Baxter Arcade, the ReCYCLEry includes a small shop packed with tools and bike parts, an outdoor corral of bikes awaiting adoption, and one parking stall where a tent can be put up on rainy days.

Ricky Pimentel is a ReCYCLEry board member and volunteer mechanic. “We just want people to have access to bikes and to see bikes out there on the streets and not in the trash,” he said. Pimentel, a graduate student in biomedical engineering at UNC, learned bike mechanics while working at a similar bike co-op in Colorado.

Bike co-ops like the ReCYCLEry are in part a response to the problem of bike waste. By some estimates, about 15 million bikes are discarded annually worldwide. The ReCYCLEry makes a dent in the problem by refurbishing two hundred to five hundred bikes a year. At 25 pounds per bike, that could amount to over six tons of material that remains in use and not in a landfill. Teaching people how to maintain and repair bikes is a crucial part of the ReCYCLEry’s mission. “People come in with no skills and by the time they leave they know what they’re doing with tools,” said board member and volunteer mechanic David Schreiber. “If you want to learn,” Schreiber added, “we can help you out.”

One happy customer, Lorraine Aragon, found a bike—a used Brompton—with help from the ReCYCLEry. The bike needed new brake pads and shifter cables and a thorough cleaning. Schreiber helped Aragon do the work.

“David was willing,” Aragon said, “to take the whole thing apart in ways I would never have dared to do. One thing you learn from seeing that is that bikes are fairly basic machines; unlike so much technology today, bicycles are meant to be taken apart and put back together again. It was a great lesson.”

Cathy Musci also got a bike through ReCYCLEry connections. Her son Rob had met Pimentel when they were students at Colorado State University. Rob, now living in California, contacted Pimentel and asked him to build a bike that would become a Mother’s Day gift for Musci. Her husband and other sons were in on the project.

Pimentel in turn contacted Musci and helped her select a frame from among the ReCYCLEry’s stock. “It’s a Trek frame but it’s not all a Trek bike,” Musci said. “It’s got different components. I call it ‘Frankie’ because it’s like a Frankenstein, made with parts from other people’s bikes.”

After Musci received the gift bike, she took it to the ReCYCLEry for fine tuning. Pimentel explained what he was doing as he adjusted the bike. “He talked about it and tried to build my knowledge,” Musci said. “I wouldn’t try to put a bike together now, but at least I understand the workings of it. I’m grateful for that.” Teaching repair skills sets the ReCYCLEry apart from most commercial bike shops. The ReCYCLEry also promotes cycling as an everyday activity. “You don’t need to wear Lycra or buy a multi-thousand dollar bike to enjoy riding,” Schreiber told me. “The people who come here are regular people. They use bikes for going to school, going to work, going shopping, going for fun rides, and everything in between.”

Customers who don’t want to get their hands dirty can buy a bike outright from the ReCYCLEry, though the supply of ready-to-ride bikes is usually low. Prices range from “almost nothing,” as Schreiber put it, to over a thousand dollars. “We’ve sold some incredible bikes,” Schreiber said. The fancier bikes are often ones donated to help the ReCYCLEry raise funds.

The average price of a bike that’s already been refurbished is about $400. “We price them to go,” Schreiber said. Parents whose children outgrow their bikes can often just swap an undersized bike for a bigger one.

Schreiber estimated that the open workshops serve about a thousand people a year. That puts a heavy demand on the ReCYCLEry’s dozen or so volunteer mechanics, so new people with bike repair skills are always welcome. Volunteers who speak Spanish are especially needed. Another need is for more indoor workshop space and a place to store bikes out of the weather.

Cathy Musci was delighted with the ReCYCLEry and her Frankenbike. “The organization is a great community-builder,” she said. “Everybody we met there was enthusiastic and generous. I felt bad that I hadn’t heard of the ReCYCLEry before I got my bike. It’s truly a hidden gem.”

On open repair weekends, it shines.

1 Comment on "ReCYCLEry Bike Co-Op Is a Community Gem"