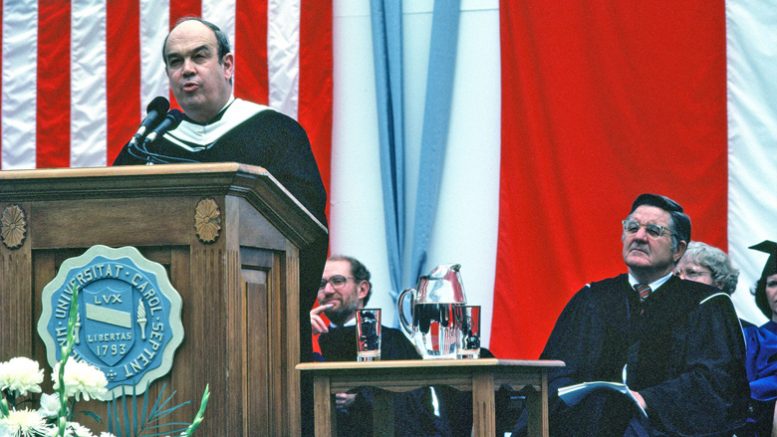 News coverage of recent college and high school graduation ceremonies reminds me of another commencement — one that changed this newsie’s life in a flash.

May 1985, Kenan Stadium, there’s UNC President William C. Friday watching as graduation speaker Charles Kuralt takes the podium. I’m covering the event for The Chapel Hill News with pen and camera, as Kuralt says, “It was on this campus, all those years ago, that I first became faintly aware that there is, in this state, and in this nation, and in this world, an association of men and women, who, while they may not even know one another, might still be called a conspiracy of good people …”

And then the legendary CBS newsman went off-script, riffing about the intersection between civic engagement and local reporting, concluding in measured tones, “The future success of the American media lies in its ability to become relentlessly local.”

I distinctly remember that moment — like Vonnegut’s image of the “bug in amber.” As if the air suddenly had been sucked out of Kenan Stadium and everything went into freeze frame.

Fast forward now from 1984, and we are seeing how prophetic Kuralt’s words were.

So, if you’re wondering why this publication and other true community newspapers are critical to the maintenance of this thing we call community, consider the comments of cowboy poet and columnist Baxter Black, who wrote the following in an op-ed piece titled, “Why I Love My Hometown Paper” (a weekly in San Pedro, Ariz.).

“Small-town papers often thrive because CNN or The New York Times are not going to scoop them for coverage of the ‘VFW Fish Fry’ or ‘Bridge Construction Delay’ or boys and girls playing basketball, receiving scholarships, graduating, getting married or going off to war …”

“I think of local papers as the last refuge of unfiltered America — a running documentary of the warts and triumphs of real people — unfettered by the spin and bias and the opaque polish of today’s homogenized journalism.

“It is the difference between homemade bread and Pop Tarts.”